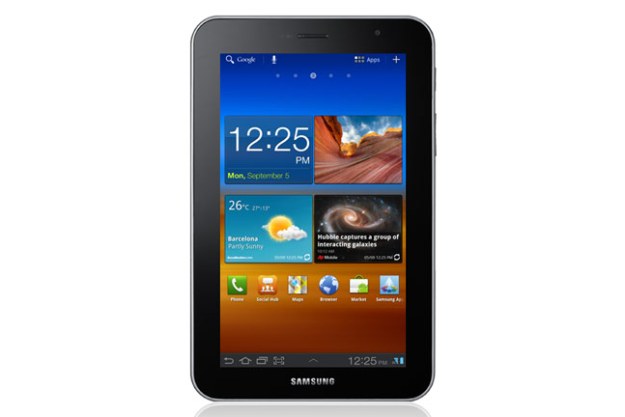 “If you're willing to pay more for a 7-inch tablet, the Samsung Galaxy Tab 7.0 Plus is a fantastic option.”

It’s been a year, but Samsung has finally upgraded and enhanced the original 7-inch Galaxy Tab, bringing the manufacturer’s slick Android Honeycomb user interface (UI) to a small form factor. The end result mostly works, though it’s clear that Google’s tablet operating system just isn’t meant to be crammed into a 7-inch space.

We recently reviewed the Kindle Fire, a new 7-inch tablet with a completely new interface. The Galaxy Tab 7.0 Plus has a slightly larger bezel (the area around the screen) than the Fire, but is a bit thinner at 9.9mm and lighter at just 12.17oz (345g). While Amazon stuck with a very square and rigid design, Samsung has tapered the edges nicely. The Tab 7.0 Plus actually looks a lot like an extra-large Samsung Galaxy Note with its faux brushed metal back simple camera and flash. But mostly, it looks like a smaller Galaxy Tab 8.9 or 10.1. As you might expect, though, it’s a bit thicker than both of those tablets.

Sticking with the solid design of the Tab 8.9 and 10.1, the 7.0 Plus’s volume and power keys are on the top or right side of the tablet, depending on which orientation you prefer. They are easy to locate and press. Two speakers adorn the bottom of the unit. We didn’t find them particularly powerful, but having stereo speakers on a 7-inch tablet at all is nice. A front and rear camera is also a nice touch, especially considering the Kindle doesn’t have them at all. An audio jack is located on the top right of the unit as well.

Surprisingly, Samsung has included a microSD card slot on the left side of the tablet (standing upright). This is fantastic, as few will want to fork over the extra $100 or $200 to upgrade from 16GB of memory to 32GB or 64GB. A small infrared port is located at the bottom of the unit, which can be used with apps like Peel to essential function as a universal remote.

The biggest downside to Samsung’s design is the same downside all of its tablets have: the proprietary charging port. Instead of charging via micro USB or some standard, Samsung has gone the Apple route and slapped its own “30-pin” connector on there. If you want to connect via HDMI, micro USB, or other formats, you’ll have to buy converters from Samsung. And if you happen to get stuck anywhere without your proprietary charger, there is no way to charge your tablet. Again, this is a weakness the Samsung tablets share with the Apple iPad.

Internally, the Galaxy Tab 7.0 Plus is a capable tablet that runs similar specs to most of the units we’ve seen this year. It has a 1.2GHz dual-core processor, 1GB of RAM, 16, 32GB, or 64GB of internal storage (depending on how much you’ll pay), Wi-Fi connectivity, Bluetooth 3.0, an accelerometer, a gyroscope, a digital compass, a 3-megapixel rear camera, and a 2-megapixel front-facing camera.

For those interested in benchmarking tests, we ran the Quadrant test on the 7.0 Plus and it scored better than any other Samsung tablets and dual-core phones we’ve tested. The Galaxy Tab 10.1 scored about 2,000 and most of the recent dual-core phones and the Tab 8.9 have scored about 2,500, but the 7.0 Plus consistently scored between 2,800 and 3,500. Does it seem almost twice as fast as the 10.1? No, but a high score is a high score. Still, for some reason, we got a wide variety of scores for the 7.0 Plus. Usually, they don’t vary so much.

Finally, the screen on the 7.0 Plus is a 7-inch LCD with a 1024 x 600 pixel resolution. This is somewhat lower than the 1280 x 800 pixels that make up most larger tablet screens. While we don’t mind the smaller 7-inch size, the lowered resolution does harm the experience a bit. Most noticeably, the notifications menu takes up a huge portion of the screen on this unit. Even with its large size, it still doesn’t fit everything in there that’s needed, requiring you to awkwardly scroll through notifications. Samsung’s added Mini Apps menu is also a bit crammed in there, and just doesn’t look good or operate as well on a small screen. It’s not really needed as much either. When you’re on a small screen, you’re more likely to endure full screen apps. It’s just how things go.

Android 3.2 Honeycomb makes its return yet again for the Galaxy Tab 7.0 Plus. We’ve been told that the tablet will get an Android 4.0 (Ice Cream Sandwich) update in the near future, but when that is, we don’t know. Early 2012 is the timeframe most manufacturers are giving out.

Still, if you’ve seen Android 4.0 running on a tablet (check it out here), you’ll quickly realize that it looks almost identical to Honeycomb. From what we’re hearing, it should give most tablets a boost in speed by better taking advantage of their individual hardware specs, and there will be some better gestures and app-managing tools, but that’s about it. In other words, don’t cry yourself to sleep because you don’t have Android 4.0 yet on your favorite tablet. The upgrade will be fun, but underwhelming. Smartphones will see more benefit from Google’s new OS.

Getting back to the tablet at hand, the 7.0 Plus runs Samsung’s TouchWiz UI, a custom user interface that we think really enhances the look and feel of Android Honeycomb. As we noted in the section above, there are some issues with the screen size, but even with that, Samsung’s Android tablets are among the most pleasant to use, and don’t come with much bloatware either. The interface of the Kindle Fire is a strong rival, but that tablet offers a much more closed environment, mainly offering Amazon goods and services, while the Galaxy Tab has access to all of Google’s services, and the Android Market, which contains apps for almost every Amazon service on the Kindle Fire.

The only complaints we have about the 7.0 Plus interface are that sometimes swapping between pages or homescreens is slow for some reason — not jittery or laggy, just slowed down, as if on purpose — and the unlock screen tends to take a few seconds to reorient itself, forcing you to wait to unlock it.

Unlike the Kindle Fire, the Galaxy Tab 7.0 Plus actually has cameras. They aren’t great, but they are present. Taking after the iPad and two larger Galaxy Tabs, the 7.0 Plus has a somewhat weak 3-megapixel rear camera and 2-megapixel front camera. There’s nothing particularly horrible about the cameras, but they appear to use a dated Samsung camera app and don’t capture light or detail nearly as well as some of the newer smartphone cameras. Whether this is a big deal or not is hard to say. Though we’ve had tablets floating around the office all year, it’s rare that we ever use their camera functionality at all.

The Tab 7.0 Plus comes with a non-removable 4,000mAh battery. Samsung hasn’t provided an estimate on battery life, but in our experience, it’s able to hold a charge for more than a week on idle and seems to achieve a battery life somewhere around seven to nine hours. That’s about comparable to most tablets, and usually enough for casual use without always having to run back to an AC outlet.

The 7.0 Plus is a step up from Amazon’s budget tablet in almost every way, save the interface. It has much more storage, a better screen, double the RAM, better design, and cameras. The price difference between the two tablets is steep, though. For the privilege of a couple cameras and smoother speeds, you must pay $400, or double the price. This is hard to swallow, considering the Nook Tablet offers many of these upgrades for $250. Still, if you’re willing to pay more for a 7-inch tablet, the Samsung Galaxy Tab 7.0 Plus is a fantastic option.