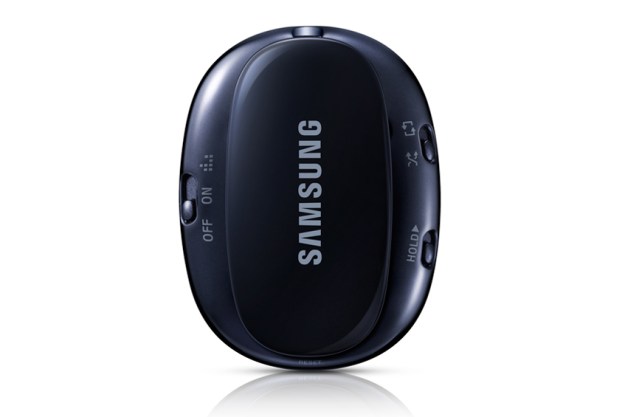 “People who are into iPod shuffle-type MP3 players should dig the $50 Samsung Muse. You get a small, light, clip-able device that delivers decent audio, which is all you need. The fact that it can sync music from a smartphone as well as a PC is a nice bonus, though choosing individual tracks can be a challenge.”

We had high hopes for the $50 Samsung Muse. Though Apple is the only big name in MP3 players these days, Samsung has been making decent music devices for a couple years now. This audio player is an iPod Shuffle-style device – a small, light clip on with limited space and no display. What sets the Muse apart is that it’s designed to sync music directly from a smartphone (or a computer). That’s a neat trick, and it does it without the aid of Bluetooth or any other wireless technology. Seem old school? Maybe. It’s a tradeoff for long battery life and simple controls.

Out of the box, it’s easy to see why the Muse was originally called the Pebble, because that’s exactly what it looks like. It’s barely two inches long and weighs around 13 ounces with a smooth top that made us want to rub it like a worry stone. If it weren’t for the clip on back it would probably get lost within the first five minutes of owning it. Aside from that, this size is good for use during exercise or for people who like having a player readily accessible instead of having to dig it out of a pocket or bag.

Befitting its nature, the Muse’s controls are few and basic. The whole top of the device is touch-sensitive, so the Play/Pause, Forward/Back, and Volume controls respond to light taps. No clicky buttons here.

If that makes it seem like it might be easy to accidentally activate the controls: it is. You’ll need to slide the Hold toggle on the side to keep that from happening. Other than this and the On/Off switch, there’s one other toggle that gives you a modicum of control over how tracks play. Users can choose Shuffle mode or just play tracks straight through. In the latter mode playback order is based on album, with songs playing according to track number.

The last step in the On/Off switch is a mode called Samsung SoundAlive, a sound-enhancing technology. Turning it on enhances the bass for sure, but depending on the song and the headphones you use, it may make the audio quality more muddled instead of better. Without SoundAlive, audio quality is quite good, especially for a tiny player. Audiophiles may still turn up their noses, but sound is much fuller than you get with an iPod shuffle.

The included earbuds are serviceable, but you’ll want to upgrade to something better as soon as you can. With a good set of cans the volume gets loud enough to block out the outside world. Fully charged, the Muse lasted beyond five hours in our tests. The LED at top will turn red when power gets down to 10 percent, but even then you have about an hour left before it completely dies.

Samsung came up with a novel way to transfer music to the Muse. The player comes with a headphone jack-to-Micro USB dongle that connects directly to a Galaxy smartphone. Using the Muse Sync app (available in the Google Play store), you can pick and transfer tracks right from the phone in just a few seconds. It’s also possible to sync music from your computer. To do that, you must install Samsung’s Kies software – familiar to Galaxy smartphone and tablet owners – which comes stored on the Muse itself.

Moving music from a phone to an MP3 player is an interesting concept and can be useful, but we’re not sure how many people will find it convenient or desirable. If you store a large chunk of your music collection on your phone, you’ve probably committed to using it as a music player. People who make a lot of music purchases on their phone from Google Play, Samsung Music Hub, or Amazon MP3 may appreciate this functionality more since they won’t have to use a computer and a go-between. But if your music is mostly rented – from Spotify, Music Hub, or Slacker Radio, for example – those tracks won’t work on the Muse, anyway.

The Muse Sync app could use a little work itself. Overall, it’s simple, straightforward, and detects the player automatically once it’s connected. From the app, you can see whatever compatible music is stored on the device sorted by all tracks, artist, or album. There’s also a search function. But when you want to add specific songs, problems start to arise. If you sort by album and find the one you want, you can only add the whole album. If you don’t want to add one or two individual songs from it, you either have to go to the all tracks list and add them individually or add the whole album then delete the one or two you don’t want from the Muse. It’s the same deal with artists. This might not be as big an issue if user could add tracks by playlist. Sadly, the Muse app doesn’t pull playlist data from the phone, even if you make the playlist in Samsung’s music player app.

Transferring from the PC is better in that you can just drag and drop the tracks you want like any other non-iPod MP3 player. Windows Media Player recognizes it as a music device, so pulling playlists is simple as well. The headphone jack-to-USB dongle facilitates this operation as well as charges the device.

The instructions that come with the Muse encourage users to install Samsung Kies for syncing files. This isn’t necessary, though Kies will alert you of firmware updates, if nothing else.

The ability to transfer from the PC saves this player from being the nichiest of niche products since the smartphone connection only officially works with certain Samsung phones: Galaxy S2, Galaxy S3, Galaxy Note, and Galaxy Note 2. Aesthetically, it matches up with the Galaxy S3, sharing that phone’s rounded design language and its two colors, pebble blue and white.

Unofficially, Muse Sync does work on some other smartphones, like the Galaxy Nexus. If the phone has a USB Host port, there’s a good chance of it working. However, as it’s not supported on those other phones, you can’t count on it.

People who are into iPod shuffle-type MP3 players should dig the $50 Samsung Muse. You get a small, light, clip-able device that delivers decent audio, which is all you need. The fact that it can sync music from a smartphone as well as a PC is a nice bonus, though choosing individual tracks can be a challenge. It’s the same price as an iPod shuffle yet offers twice as much storage space (4GB vs 2GB), which is also a nice bonus, though 4GB still doesn’t get you far. If this is your type of device, scoop it up. Just remember to buy some good headphones.