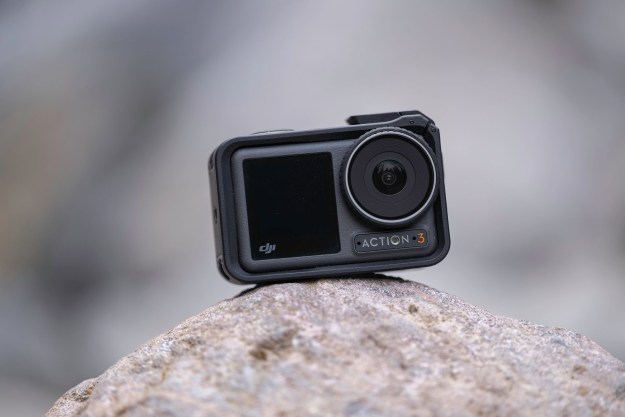 “The DJI Osmo Action 3 is a great action camera that distinguishes itself with a unique magnetic clip system and an exceptionally rugged design.”

When I reviewed the DJI Action 2 last year, I applauded its innovative design, which differentiated it from all the other action cameras on the market. The DJI Osmo Action 3 does a 180-degree turn back to basics with a more traditional design and the resuscitation of the Osmo name. While this move initially puzzled me, now that I’ve had time to test the Action 3, I’ve come to appreciate why DJI made the change. This tough, new camera is built to survive anything you can throw at it, but does it do enough to differentiate itself from the competition?

The Action 3 appears remarkably similar to the original DJI Action camera, which was a great camera but was perhaps a little too similar to GoPro. The Action 3 may still carry that typical action camera appearance, but it is unique in some key ways. Primary among them is the magnetic quick release system, which it has inherited from the Action 2, and which has been significantly upgraded to be more solid and reliable.

This magnetic clip system allows you to attach and detach the camera from various mounts, or even just stick the camera to a metal surface. While such a system may seem concerning in terms of its stability, I can vouch for the reliability of the magnetic clip, as it stayed locked and secure on an extension rod out a car window while traveling at 40 mph, and I’ve flown the Action 2 on top of a drone at even greater speeds than that. The one thing to keep in mind is that the magnetic clip sometimes doesn’t snap together perfectly the first time, so it’s a good idea to double-check that connection.

The Action 3 is unique in that its front screen is now touch-sensitive, which enables you to adjust settings while the camera is facing you, such as when shooting vlog-style videos. Since I frequently shoot vlog-style YouTube videos myself, I very much appreciate this feature. I’m also a fan of the battery door on the Action 2, which is easy to operate while remaining secure and waterproof.

If you liked the look of footage captured with the Action 2, you’ll also appreciate the Osmo Action 3. To my eye, the difference is practically nonexistent. That’s not a bad thing, though, as the Action 2 captures great-looking video. Details are crisp and clear, and both Rocksteady and Horizonsteady image stabilization are highly effective. The standard color mode is perhaps a little oversaturated, but I personally like the look of it, and the D-cinelike color profile is available if you prefer to have more editing latitude and craft your own look in post-processing.

The Action 3 can shoot in 4k at up to 120fps, and at up to 240fps in 1080p. Shooting at 1080p 240fps is as mushy and ugly as you would expect, but 4k 120fps looks pretty good. It’s limited to 4k resolution, which is fine if you just want to publish straight-out camera footage without much editing. But it doesn’t measure up to the GoPro Hero 11 Black’s 5.3k maximum resolution and larger sensor, which offers extra versatility in post-processing.

I found that the Action 3 outperforms the Hero 11 slightly in terms of video stabilization, while the Hero 11 is marginally sharper. The end result is that in terms of pure video quality, the two cameras are very evenly matched.

One thing I do really like about the video produced by the Action 3 is that it matches up really well with other DJI products. This means that if you fly a Mini 3 Pro, for example, to capture aerial footage, it will pair nicely with the look of footage captured with the Action 3.

If you fly a DJI Mini 3 Pro to capture aerial footage, it will pair nicely with the look of footage captured with the Action 3.

The Action 3 puts extra emphasis on color accuracy, with a large, dedicated sensor for detecting the correct white balance for any given scene. While this didn’t appear to make a huge difference in the rather tame conditions I filmed in with the camera, it would likely be more useful for deep sea diving.

Both the front and rear displays of the Action 3 are bright with good color. The larger rear touchscreen is certainly much easier to use than the smaller screen of the Action 2, and the built-in front screen means you don’t have to get a separate module to have a front-facing display.

The Osmo Action 3 is remarkable in the extent to which it can be dropped and submerged. It’s drop resistant up to five feet and is waterproof all the way down to 52 feet underwater. Furthermore, it’s rated for use between negative four and 113 degrees Fahrenheit. Those are some truly impressive numbers, and they are reflected in the particularly rugged feel of the camera. I really like the rubber ring around the lens, which adds protection to the most vulnerable part of the Action 3, though I would prefer that it lock securely into place, as it can be nudged off the rim of the lens accidentally.

While I didn’t chuck the camera around like a hacky sack, and I sadly lacked the time for deep sea diving lessons, I did take the Action 3 out hiking and dunked it in a lake. This admittedly minor punishment didn’t even faze the Action 3. If you want extra drop protection DJI does sell a housing, which is included with the Adventure combo.

There is one major flaw, however, when it comes to using the camera in the real world, which is that the magnetic plates of its unique mounting system have an unfortunate tendency to grab magnetic particles of sand. It doesn’t hurt the camera, but it can interfere with the locking mechanism and require frequent cleaning if you take it to the beach.

The Action 3 offers similar battery life to competing action cameras, though it is capable of operating at more extreme temperatures. I was able to make it through a typical day of hiking and recording without needing to swap the battery out. Still, if you plan on doing longer shoots rather than brief highlights such as I prefer, you will definitely want to have spares. The camera also charges very fast, taking only 18 minutes to charge a battery up to 80% of the way full.

I tested the Action 3 with the optional Multifunctional battery case, which not only acts as a charger and carrying case for up to three batteries at a time, but you can also charge your smartphone or other USB-C devices from your Action 3 batteries by plugging them into the case. It also has extra space in which to store two extra microSD cards.

I didn’t experience any issues with overheating or other performance-related problems while shooting with the Action 3. The DJI Mimo companion app is also functional for controlling the camera, as well as downloading and editing footage.

Audio recording is very good, and I’d feel comfortable using the Action 3 to shoot vlog-style videos on its own. If you want even better audio you can plug the DJI Mic into the Action 3 and record via that excellent wireless microphone. When I tried this out it was a simple plug-and-play experience, with the only setup hassle being unclipping the USB-C port door from the Action 3 to make way for the DJI Mic.

The Action 3 is available now, starting at a $330 price point. You may also want to consider upgrading to the $440 adventure combo, which includes three batteries, the excellent multifunctional battery case, two extra lens protectors for the Action 3, two adhesive base kits, a protective frame, and an extension rod kit. Though it adds $110 to the base price, the Adventure kit adds a lot of value with really useful accessories at a discount compared to their individual MSRP.

While I still miss the innovative design of the Action 2, the DJI Osmo Action 3 is a great action camera that stacks up well to fierce competition from the likes of GoPro and Insta360. While, in the end, I don’t find that it pulls ahead of other cameras in this genre overall, it does boast a couple of significant advantages.

If you need an extra tough camera, this is the one to choose, particularly with the optional protective frame installed. And if you plan on going diving, the Action 3 can go all the way down to 52 feet underwater without an extra diving case. The other big selling point is the magnetic quick-release system, which is certainly advantageous if you need to swap mounts quickly. Though, as I found, sandy beaches are this mechanism’s Achilles heel.

The Action 3 will also appeal to DJI drone pilots looking for a rugged camera that will easily match the aesthetic of footage captured using popular drones such as the DJI Mini 3 Pro, Mavic 3, or Avata.