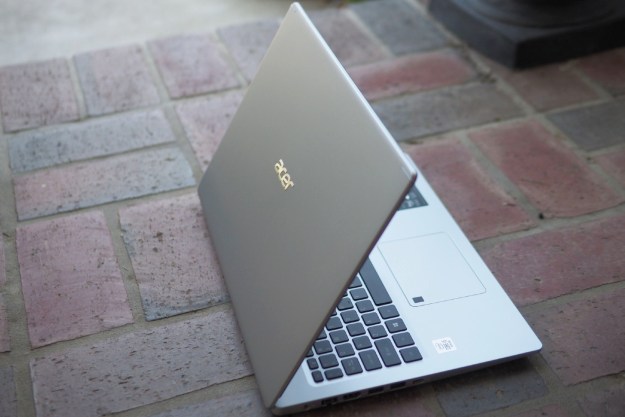 “The Acer Aspire 5 is an ultra-cheap laptop, and it feels like one.”

If you’re looking for the latest version of this laptop, you can take a look at our Acer Aspire 5 (2021) review.

Windows laptops under $500 are usually sad, under-powered devices. But the Acer Aspire 5 was always an exception.

Last year’s model, which was just $400, combined impressive performance for the price, battery life, and build quality to make it the best budget laptop you could buy.

Acer has a new model this year, but this time around, I’m testing out a more expensive $550 version. The configuration comes with a Core i5-1035G1 instead of a Core i3, 8GB of RAM versus 4GB, and a 256GB solid-state drive (SSD) instead of just 128GB. The same $400 configuration is still available, as is an option for AMD’s Ryzen 4000 CPUs.

The thing is, time hasn’t stood still. I’ve reviewed some excellent budget laptops lately, and the pressure has turned been up for the Aspire 5. Does the new model maintain its lofty status or has it fallen behind?

Like before, the Acer Aspire 5 is mostly plastic construction. The aluminum lid supposedly adds some rigidity, but there’s still lots of room for improvement. The lid is still quite flexible, easily bending in the middle when lightly pressed. The keyboard deck has some give that’s not as egregious, and the bottom of the chassis also gives in to light pressure. It’s not a rare thing to see in laptops at this price, such as the all-plastic $650 Dell Inspiron 14 5000 that I recently reviewed.

But other devices like Lenovo Yoga C640, Lenovo Flex 5 14, and Acer Swift 3 are all priced in the same ballpark as the Aspire 5 I’m reviewing — albeit they’re 13- and 14-inch laptops, and we haven’t yet seen a superior 15-inch budget laptop — but they offer up much better build quality. At the Aspire 5’s $400 starting price, it’s not such a huge deal, but with just $50 or so separating the models the build quality differential becomes a bigger issue.

There’s no bling to speak of, which is a good thing on a plastic laptop.

The Acer Aspire 5’s aesthetic is just OK for the price, at least in the silver color that I reviewed. There’s no bling to speak of, though on a plastic laptop, that’s not a bad thing. Too much fake chrome can make a laptop look cheap if authentic materials aren’t there to back it up. The Aspire 5 is also available in red and black color schemes that are more visually appealing and offer a bit more interest.

One benefit of the Asprie 5, though, is the size. It’s not thick for a budget 15-inch laptop at 0.71 inches. At 3.97 pounds, it’s not overly heavy either. That’s in its favor. However, the display bezels might be slim on the sides, but the top bezel is rather large by modern standards and the chin is just large, period. That gives the laptop more width and depth than you’ll find on more premium laptops — not a surprise, but it needs to be said.

Connectivity is a strong point. You get a USB-C Gen 1 port (no Thunderbolt 3, which isn’t surprising at this price), two USB-A 3.1 ports, a USB-A 2.0 port, an HDMI 2.0 port with HDCP support, and an RJ-45 Ethernet port. You won’t need many dongles with the Aspire 5.

Wireless connectivity is up to date with Wi-Fi 6 on board and Bluetooth 5.0.

The Core i5-1035G1 in my review unit is a middling performer that’s best for basic productivity, web browsing, multimedia consumption, and the like. They are Intel’s latest quad-core processors, which is the standard in portable laptops like this one. As I ran the Aspire 5 through our suite of benchmarks, though, it became clear that Acer’s implementation here is a bit slower than average.

It’s not a speed demon, but the Aspire 5 is fast enough for its intended purposes.

The same was true in our more real-world test that uses Handbrake to encode a 420MB video as H.265. The Aspire 5 took just over five minutes to complete the test, while the Inspiron 14 finished almost 30 seconds sooner, and the Spin 3 was nearly a minute faster. The AMD-powered Flex 5 14 finished in under three minutes, blowing away the rest of this field.

The Aspire 5 is fast enough for its intended purposes, and it’s certainly quicker than last year’s model with a dual-core Core i3. It’s not a speed demon, however, and so you’ll want to keep your expectations in check.

Also, it uses Intel’s lowest-end UHD Graphics, and so all but the most lightweight gaming is out of the question. Other laptops with 10th-generation Intel Core i5 processors offer faster Iris Plus graphics, but Acer has opted for the cheaper option. If you want a faster (and more expensive) laptop but like the Aspire 5 otherwise, then consider the AMD Ryzen 4000 versions — you’ll get much better performance.

This is still fairly common results for budget laptops, especially in terms of color gamut, but we’re seeing some budget machines do much better. The Lenovo Yoga C640, for example, hit 96% sRGB and 73% AdobeRGB, with color accuracy of 1.07 (1.0 and less is considered excellent). That’s premium laptop territory, and while such machines are still few and far between at this price point, there’s the genuine possibility that displays are starting to move upscale.

I can’t fault this display too much, though. Panels offered on the Lenovo Flex 5 or the Dell Inspiron 14 5000 are equally unimpressive. And in daily usage, it’s good enough for productivity work and browsing the web — although the gamma is too dark for pleasant Netflix bingeing.

The audio remained a strength, with copious volume that didn’t distort when turned up loud and a little bit of bass to go with solid mids and highs. You’ll be able to binge your Netflix and watch YouTube videos without headphones or a Bluetooth speaker, although as usual was suggest the latter if you want to listen to your tunes.

The Aspire 5’s typical island backlit keyboard offers plenty of spacing, although the keycaps are a little small. The mechanism is on the crisp side, though, which is a plus. Key presses register without too much pressure, and there’s a comfortable bottoming action that helps with precision. I had no problem typing at full speed.

As many budget 15-inch laptops do, the Aspire 5 squeezes in a number pad off to the right. That’ll come in handy for some, but it awkwardly forces the touchpad off to the left.

The touchpad uses Microsoft Precision drivers and has a smooth surface with just enough grip to make swiping and scrolling comfortable. Multitouch gestures triggered just as they should. That isn’t always true of the touchpads on budget laptops, so I’ll count that in the Aspire 5’s favor. You don’t get the glass touchpad of a premium laptop, but for the price, the Aspire 5 makes the cut.

I was less thrilled by the fingerprint scanner, which is located in the upper-right corner of the touchpad. It worked well enough for Windows 10 password-less login, but the location is distracting.

Thanks to its low-power Core i3 CPU, last year’s Aspire 5 received kudos for its long battery life. This year’s Core i5 model has the same 48 watt-hours of battery capacity, and it doesn’t come close to matching the earlier version’s performance.

In our demanding Basemark web benchmark test, the 2020 Aspire 5 lasted for just under three hours, compared to last year’s model that lasted for four hours. The Lenovo Flex 5 with its Ryzen CPU lasted for almost an hour longer as well.

Switching to web browsing, the 2020 Aspire 5 managed just over four hours, a very disappointing score that’s less than half of the 2019 model’s nine hours. The Flex 5 again was superior at eight hours, and the Acer Swift 3 with the same CPU lasted for seven hours.

Battery life went from a strength to a weakness.

The 2020 Aspire 5 did a little better in the video looping test that runs through a Full HD Avengers trailer until the battery runs out. Here, it lasted for about 9.5 hours compared to the 2019 Aspire 5 at 13 hours and the Flex 5 at 11 hours.

The bottom line is that battery life went from a strength to a weakness, and it’s not that much better than the Dell Inspiron 14 5000 that had even worse battery life. Maybe the Aspire 5 will get you through a good part of a day of typical productivity tasks, but you’ll want to carry your charger with you just in case. Though I haven’t tested it yet myself, the Core i3 model may get closer to last year’s results.

The Acer Aspire 5 is much more attractive at its $400 price for a Core i3, 4GB of RAM, and a 128GB SSD. That pricing is still hard to compete with. But at $550, we’re starting to expect more. Better build quality, better performance, better battery life, and better displays are starting to become the norm, even at budget prices.

I haven’t reviewed a better 15-inch budget Windows laptop than the Aspire 5, but there are plenty of capable Chromebook options.

On the Windows side of things, the Lenovo Flex 5 14 with its AMD Ryzen CPU is a solid choice. It has a slightly smaller display, but it’s way faster, gets better battery life, has a more robust build quality. It’s also a 2-in-1, making it a more flexible option at just $50 more.

Acer’s Swift 3 Ryzen is another good option if you can spend $100 more. It too is faster, it’s better looking, gets better battery life, and has an improved build quality.

Finally, you could drop down to a 13-inch model if size isn’t at all important and grab the Lenovo Yoga C640. Its all-metal build is superior and its battery life is so much better. Performance will lag a bit thanks to its Core i3 CPU, but again it’s a very functional 2-in-1 for just $50 more.

Despite the cheap chassis, the Acer Aspire 5 is built well enough to last a few years, there’s no doubt about that. And other than lacking Thunderbolt 3, it has up-to-date components, including Wi-Fi 6. We’ll always wish for more than the one-year warranty, though.

No. The cheaper configuration offers a more appealing value, but there are better budget laptops out there.