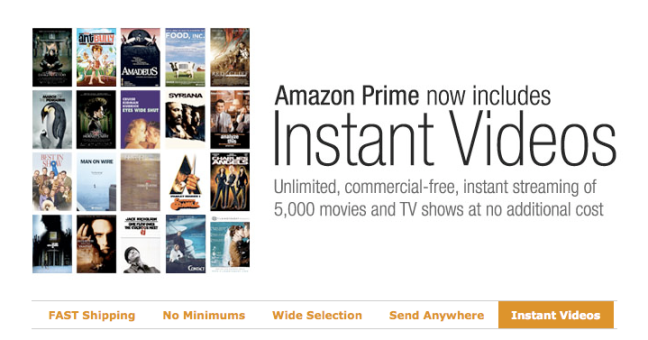 Amazon announced today that it has begun offering members of Amazon Prime access to instant video streaming of more than 5,000 movies and TV shows.

Amazon specifically mentioned some titles among the 5,000 available, including “The Girl with the Dragon Tattoo” trilogy, “Amadeus,” “Syriana,” and “Chariots of Fire.”

An Amazon video streaming service that would compete with Netflix has been anticipated for sometime, but until today it wasn’t clear how the program would be implemented. So far, it sounds like a good deal for consumers. Netflix offers a streaming-only plan for $7.99 a month —  or just under $96.00 a year. Amazon’s Prime $79 annual membership is cheaper, and also includes free two-day shipping for most of Amazon’s retail products.

As far as number of titles available, it looks like Netflix may have the upper-hand — but it’s not clear by exactly how much. Netflix doesn’t disclose just how many titles it has available for streaming, but at least one analyst cited in a report by MarketWatch estimates that the total is somewhere in the neighborhood of 20,000 — four times as many as Amazon is currently offering.

Apple, Hulu, Google are some of the companies competing for a share of the Netflix-dominated video streaming market. Last week, Redbox announced that it was looking for a partner to help deliver its own instant video streaming service. At the time, Amazon was rumored to be a likely candidate for a Redbox partnership.

Best Prime Day Apple Deals 2022: What to expect in July