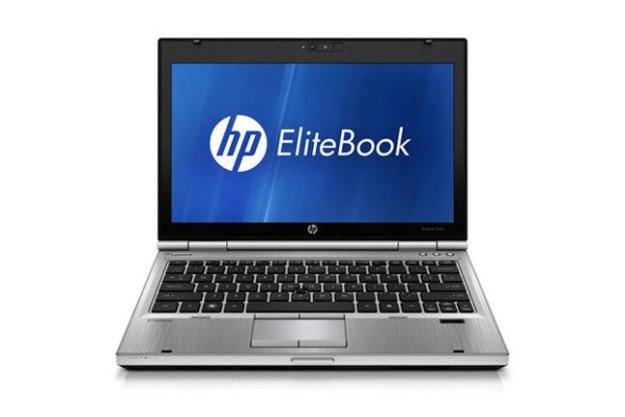 “A better reason to buy the EliteBook 2560p is the built-in software, which is excellent and may make-or-break a purchase for certain enterprise buyers.”

This is HP’s flagship business ultraportable — which means, in the eyes of enthusiasts, it’s one of the most interesting laptops the company makes. A pricetag of over $1,000, however, may put a damper on some buyer’s excitement. For that can of dough, buyers will be expecting a portable workhorse.

Our review unit is a base model equipped with a Core i5-2410M processor, 4GB of RAM, and Intel HD 3000 graphics. These specifications are far from outstanding for a laptop starting at $999 on Amazon, but the business laptop market is a different world. The competing Lenovo X220 with a Core i5 is at least $899 on Amazon, which isn’t exactly cheap, either.

As always, we’ll do a thorough investigation into the 2560p’s hardware performance, but that isn’t what will make or break this laptop. Instead we’ll need to focus on design, software, and perhaps above all — portability.

When it comes to aesthetics, HP’s direction with the ProBook and EliteBook lines has been clear for some time: simple and silver. While Lenovo’s matte black ThinkPad laptops look more outdated every day (the Edge and X1 excluded), the EliteBooks continue to look and feel modern. There is also an industrial feel here, a complexity and heft that feels appropriate for a laptop in this category.

Don’t mistake any of this for beauty, however. While this laptop might avoid the overbearing functionality that oozes from a ThinkPad, it is still a mostly functional product that doesn’t make many concessions to aesthetics. It’s thick and blocky rather than smooth and elegant. A large battery bulges from the rear, and the hard plastic bottom feels unpleasantly coarse. If you want luxury, well…HP will be more than happy to sell you an Envy.

Take a trip around the laptop and you’ll find average connectivity. Three USB 2.0 ports, one of which is a combo eSATA port, are included. Display connections include VGA and Display Port, which is rounded out by a combo mic/headphone port, an Ethernet port and a card reader. Though the availability of VGA and eSATA is nice, the lack of USB 3.0 is disappointing.

The 2560p may be small due to its 12.5-inch display, but the keyboard is obviously designed for use for long periods of time. Keys are not huge, but large enough. Key feel is on the stiff side, but allows for precise typing. You’ll have to put in a lot of effort to generate keyboard flex. Like all EliteBooks, the 2560 uses a magnesium-alloy frame that gives it surprisingly stiffness and durability – we’ve seen a grown man stand on one without putting so much as a dent in it. That’s the kind of durability you pay a premium for in a business-rugged notebook.

Palm space is at a premium, to be sure, but it was just barely adequate for our large hands. Smaller hands will have an even better experience, and long typing sessions should prove comfortable for almost any user. That’s not something that can be said for many ultraportables of this size.

This requires that the touchpad be smaller, and using it is a bit uncomfortable, especially compared to the supersized trackpads now cropping up on Ultrabooks. It’s not as bad as we thought it might be at first glance, however. Even multi-touch gestures work well.

Making the most out of matte

Just like the body and bezel, the display on this laptop is matte, making it easier to use in various conditions without paying much attention to dust or grime. Use in direct sunlight is possible, and brightly lit rooms are no challenge. This is a rare example of a laptop that’s small enough to take anywhere and enjoyable to use anywhere.

All of the standard matte display flaws apply, however. While almost always legible, the display never appears particularly bright even when set to maximum. Colors have little punch, an issue that’s most apparent when playing movies or games. Black level and gradient test images showed poor performance overall and there was some noticeable banding in the darker half of the gradient test image. If you want to enjoy media, buy another laptop.

Audio quality proved much different. Though it has no special branding, this laptop sounds about as good as the Beats Audio branded dm1z. Like any laptop, you won’t be wanting to use this as your only stereo, but if you’re stuck in a hotel room and want to listen to some tunes, it’ll do.

The 2560p seems a little bit heavier than its official 3.68 pounds suggests due to its chunky frame. That’s just a fraction more than your typical 11.6-inch or 12.1-inch laptop. Thickness is 1.08 inches, which doesn’t seem like much, but the chassis is a block, more or less. It’s 1.08 inches all the way through. Cramming this laptop into a small bag may turn out to be more trouble than you’d think, but once you’re on the move you’ll have difficulty remembering that you packed this laptop at all.

The standard six-cell battery sticks out of the back of the laptop, which only adds to your woes when trying to fit the laptop into a tight space.At least it provides good battery life. In Battery Eater, it managed to provide two hours and four minutes,which was extended to six hours and 49 minutes in the Battery Eater Reader’s Test. These results are not the best we’ve seen (that honor goes to the Asus U36) but they’re much better than average.

You won’t have any trouble using this laptop on your lap due to heat so long as you’re not spiking the processor. Nor will a cubicle-mate or fellow traveler complain about the noise, because at low load, there’s barely any. Ramp up the processor and the fan is most certainly noticeable, but still on the low end of the annoyance scale.

Being a part of the HP business laptop line, the 2560p includes a wide range of software that is useful for enterprise or, in some cases, home use. Consumer power users will enjoy the built-in drive encryption features, privacy manager, and security manager. These tools replicate certain functions found in high-end operating system options and security suites, so it’s nice to obtain them for free. The laptop also offers Computrace laptop tracking functionally.

Other features of interest include disk and file “sanitation” software to ensure permanent file deletion and HP SpareKey, which allows authorized users to access a system via BIOS if they’ve forgotten the main operating system password. A fingerprint reader is included for login authorization as well.

Though physically small, this laptop has plenty of power inside. It’s somewhat unusual to find normal (rather than low-voltage) Core i5 processors inside laptops with a display size below 13.3 inches.

To see if size has an impact on the processor’s performance, we ran the 2560p through SiSoft Sandra’s processor arithmetic benchmark and 7-Zip’s benchmark, obtaining combined scores of 36.73 GOPS and 7304 MIPS, respectively. These scores are right smack in the middle of the pack of normal Core i5 processors, which means they’re among the fastest scores you’ll receive from a dual-core laptop.

More general testing with PCMark 7 resulted in an impressive score of 2,243. The laptop did particularly well in the Creativity and Computation suites. Overall, it comes close to the Lenovo U400 and beats the HP Envy 14, both of which are significantly larger.

Because the Intel HD 3000 IGP used in this laptop does not support DirectX 11, we weren’t able to use 3DMark 11. We only used 3DMark 06, in which the 2560p scored 3,661. This result is on par with other Intel HD 3000 powered laptops, but far below most laptops with discrete graphics. While 3D gaming is possible on this laptop, most new titles will run at low frame rates even with detail settings turned all the way down.

In terms of direct competition, there is only one laptop that butts heads with the HP EliteBook 2560p, and that’s Lenovo’s ThinkPad X220. The EliteBook wins on price only if you take a gander at the manufacturer websites alone. On Amazon and at other online retailers, it appears that the base X220 with a Core i5 processor can be had for around $100 less than the base 2560p.

Despite all our whining earlier about Lenovo’s dedication to rather drab design, the X220 actually wins in that arena. In absolute terms the ThinkPad isn’t technically any thinner at its thickest point, but the design isn’t as blocky, so it feels thinner while in use and while being stored. The ThinkPad also has a better keyboard and trackpointer.

So why would you buy the HP? Well, it’s more attractive, but we doubt that’s a huge advantage for the intended buyer. A better reason is the built-in software, which is excellent and may make-or-break a purchase for certain enterprise buyers. Another bright spot is the touchpad, which is easier to use than the Lenovo’s and offers surprisingly good multi-touch support for such a small space, which will be a big deal for people who don’t want to use the trackpointer.

HP still has some work to do with this laptop. If anything, it is towing the corporate line too heavily — almost all of the EliteBook’s are rugged boxes, and in the larger laptops, that works. Here on the ultraportable end it, it’s more of an issue.