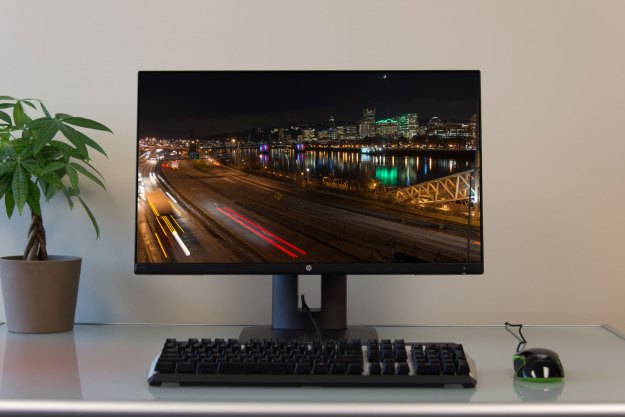 “The HP Z25n is not a bad monitor, but its performance doesn’t justify its price.”

As screen sizes increase and graphics chips, both integrated and discrete, grow stronger and more affordable, 1440p is quickly replacing 1080p as the standard. Especially above 20 inches, it offers a middle ground between the chunky pixels of 1080p and the strain 4K puts on a system. Its proliferation in the marketplace also means features like ultra-thin bezels and high color reproduction are becoming more common, and more affordable.

Which brings us to the HP Z25n. This 25-inch IPS panel boasts 2,560 x 1,440 resolution, with a 60Hz refresh rate, and a 14ms response time. On paper, that’s not an impressive rap sheet. HP also promises some features usually seen on high-quality displays, like an ultra-thin bezel, and factory color calibration.

HP is confident in the display’s quality, as proven by the $430 price tag. Will HP raise the bar, or leave it lower than ever?

When turned off, the HP has a remarkably thin bezel, but it pulls a bit of a trick to achieve that. When turned on, another quarter inch of blank space is flush with the panel, recessed from the bezel slightly. It’s still slim enough to work well in a multi-monitor setup, but not as thin as it appears at first glance.

HP does provide a great stand. The strong base means the screen doesn’t shake unless the desk it’s sitting on does, and it looks subtle and professional to boot. It’s VESA compatible, but with standard tilt, pivot, swerve, and height adjustment, there’s little reason to chase down a different mounting option.

The HP Z25n’s controls opt for the least convenient input possible – touch sensitive buttons. Each is marked by a small divot that’s almost impossible to see in anything but direct light. Attempting to find the right one often results in activating one near it.

A solid stand like the Z25n’s is the mark of build quality that’s ready for primetime.

While the main control buttons are reconfigurable to change most of the available settings, right out of the box they’re set to standard shortcuts. From left to right, the buttons open: the settings menu, current display info, source selection, and brightness from 0-100. There’s color control too, among a list of presets that includes sRGB, warm, neutral, cool, native, and a custom RGB setting.

There are a few non-color related image options, like dynamic contrast, black stretch, video overdrive, sharpness, and image scaling, but most aren’t on a 0-100 scale. They’re simple on-off presets, with the exception of sharpness, which is on a 0-10 scale. Picture-in-picture rounds out the screen settings, with options for both side by side and floating inputs. System settings include tweaking the OSD, changing the language, and turning everything back to factory settings.

The HP Z25n clearly opts for variety over quantity when it comes to ports. There’s one HDMI 1.4 with MHL, DVI-D, DisplayPort in, Mini-DisplayPort in, and a DisplayPort output for daisy chaining monitors.

Underneath the monitor there’s also a group of four USB 3.0 ports, which attach to the computer via a single upstream cable. They’re well positioned for charging devices or accessories.

This is a generous selection of ports that’s likely to cover all the bases for most users, and then some. It’s also a better group than offered by the Acer G257HU, which lacks Mini-DisplayPort, or a USB hub.

Right out of the box, it’s clear that the HP isn’t going to live up to the lofty goals set by its makers. Importantly, HP claims factory color calibration allows the display to cover 99 percent of the sRGB spectrum. In reality, our measurements put that number at 95 percent, which is right at the bottom of the best displays. It displays 72 percent of the AdobeRGB spectrum, a decent score once again, but not in the highest tier.

Average color difference is 2.33, where a lower score indicates colors that are closer to ideal, and one or lower is undetectable by most people. While the best monitors we’ve ever tested score below one, they tend to be more expensive – like Samsung’s U32D970Q. The HP Z25n performs well in its price range.

Its measurements add up to a viewing experience which is reasonable, but not remarkable.

Black levels are poor, never reaching below dark gray. Worse, gamma is way off at 2.6, instead of the desired 2.2. That means scenes appear darker than they should. When combined with poor black levels, that results in black crush, which means detail is often lost in dark images, videos, and games. Contrast ratio is a high point at 630:1, but that’s due to the display’s high maximum brightness of 277 lux.

All of those measurements add up to a viewing experience which is reasonable, but not remarkable. Differences between similar colors suffer, so areas with varied shades like grass end up as flat patches of green. It’s even more noticeable when the areas are dark. The combination of poor black levels and out-of-wack gamma means grey and black areas all have the same, shimmery silver look to them, and it’s impossible to identify differences when cast in shadow.

Even after tweaking and tuning, the monitor’s results fall well short of the benchmarks HP promises on the info page. It’s not a total loss, as the screen still hits a number of our own standards for displays, but the flaws are clear when viewing.

Color accuracy moves from a decent 2.33 to an excellent 1.18 rating, where a difference below one is too close to be seen by most. Gamma ends up at the proper 2.2 rating after calibration as well, correcting the worst measurement from the pre-calibration testing. While maximum brightness sees a slight bump, black levels and contrast basically don’t change after calibration. Color gamut holds firm, never quite reaching the promised 99 percent mark.

Blacks still don’t have a deep inkiness to them, and the separation between shades suffers as a result. It’s still an issue after calibrating that means greys and blacks bleed together indiscriminately. Colors are a bit better, but still don’t pop, and nature scenes lack the vivid, bright colors we expect to see.

Like most expensive displays, the HP offers a three-year warranty on the device. The warranty won’t cover image burn-in if the display is used for a static image, or for over 24 hours at a time, so keep that in mind.

Datacolor S5X100 Spyder5EXPRESS ($100)
The Z25n needs calibration to open up fully, and Datacolor is the industry standard.

Seagate Expansion 5TB Desktop External Hard Drive ($129)
This external data solution is a steal with 5TB of storage for just $130.

At the end of the day, the HP’s Z25n comes across as overconfident. The monitor fell short of the promises made by HP in terms of color gamut, brightness, and contrast levels, but it’s not a total loss. It certainly beats out a few other midrange displays in terms of performance and feature set.

The Acer G257HU is the HP’s most dangerous challenger. It’s a display that pushes the price of the whole category down with regular availability in the $250-$300 range. Its quicker response time of 4ms, built-in speakers, and comparably thin bezel all make it even harder to recommend the HP. Other screens, like the Asus PB258Q, also offer similar features for around $350.

At the end of the day, the HP Z25n lacks the chutzpah we like to see from a monitor priced at the top end of its resolution. It has a great stand, solid feature set, and decent performance, but none of those traits make up for a screen that costs $50 or $100 more than its competition. The only thing that might make this middling monitor worthwhile is a healthy sale price.

Topics
Best 2-in-1 laptop deals: Save on Dell, Lenovo, HP and more
All of Samsung’s videos from today’s Galaxy Unpacked event
Best HP laptop deals: HP Envy, HP Spectre x360, and more
We now know how Apple’s VR headset may handle video, and it’s pretty awesome
Get this Asus gaming laptop with an RTX 3060 while it’s $400 off
The best USB-C cables for 2023
Apple just found a bizarre way to make virtual keyboards less annoying
Forget the MacBook Pro 16: Dell XPS 15 is $400 off right now
This popular HP laptop just got a big price cut — now $270
This 8K monitor has 3D tech that can be viewed from all angles
Microsoft continues its unabashed embrace of ChatGPT and AI
Don’t fall for this Mac Mini M1 deal — buy this instead
No, AMD CPUs and GPUs won’t get cheaper — the CEO reveals why