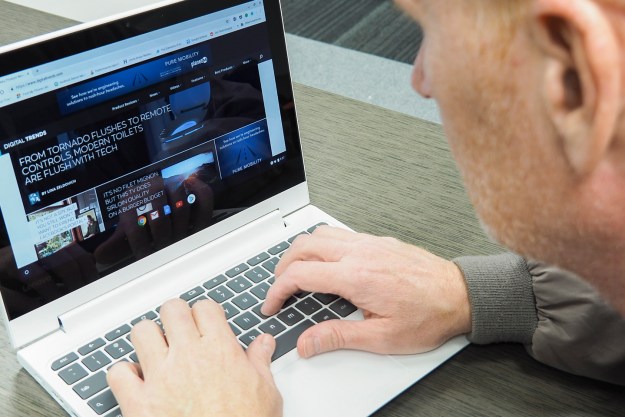 Don’t want to spend a lot of money on a new notebook? Just want an extra machine for web browsing and the occasional YouTube video? If so, then you might very well be considering a Chromebook, a platform that which offers some low-cost options even as it moves upscale. Lenovo’s Chromebook C330 is one of the newer budget Chrome OS machines to hit the market, and it’s a 360-degree convertible 2-in-1 to boot.

That’s a bargain-basement price, for sure, which sounds appealing for a 2-in-1 that’s not going to weigh you down. But does the Chromebook C330 bring enough performance and convenience?

The Chromebook C330 sits at just about the opposite end of the size spectrum from the Acer Chromebook Spin 15. In short, where Acer’s 2-in-1 is comically large, Lenovo’s option seems so small it almost borders on cute. In fact, it’s reminiscent of the netbook given its white color scheme, a failed initiative from a few years ago to make low-cost notebooks good enough for web browsing and not much more.

Of course, we say it “almost borders on cute” because it has very large bezels for such a small notebook. Unfortunately, the 11.6-inch display seems to float in a sea of bezel, and that combined with the all-plastic build makes the Chromebook C330 one of the few we’ve reviewed that feels like it’s a budget machine. The flexing in the chassis and keyboard deck do nothing to change that impression.

Interestingly, the Chromebook C330 isn’t the thickest (0.77 inches) or the heaviest (2.6 pounds) 2-in-1 in its class. The best comparison machine, the Acer Chromebook Spin 11, is slightly thicker at 0.77 inches and slightly heavier at 2.76 pounds. But the Acer also feels a lot more robust than the Lenovo, and it manages to look more modern despite its almost equally large bezels.

The Chromebook C330’s keyboard is the usual island version with black chiclet keys and white lettering, and it’s a nice surprise.

The Chromebook C330’s connectivity is definitely in its favor. There’s a single USB-C 3.0 port, a USB-A 3.0 port, a full-size HDMI connection and a DisplayPort port for connecting external displays, a full-size SD card reader, and a combo audio jack. That’s a good selection of ports for connecting both legacy and more modern peripherals. Unsurprisingly, given the low price and CPU, there’s no Thunderbolt 3 port.

The input options punch above the weight class

The Chromebook C330’s keyboard is the usual island version with black chiclet keys and white lettering, and it’s a nice surprise. The layout fits the Chrome OS standard perfectly, and it has a snappy mechanism with plenty of travel for a precise typing experience. It’s better than the keyboard on the Chromebook Spin 11 and rivals the one the Chromebook x2. It’s only real weakness is the lack of backlighting.

The touchpad is large for such a small machine, and it supports the usual Chrome OS multitouch gestures just fine. The entire surface is clickable, but there’s no right button. You’ll need to use a two-finger tap to pull up the menu. The display is touch-enabled, of course, given that this is a 2-in-1 – but there’s no pen support, which leaves it behind the Chromebook Spin 11 for anyone who wants to write or draw on the display.

The display is bright enough for most indoor environments, but it will get quickly washed out with any significant amount of ambient lighting. The contrast is good, though, and its gamma seems accurate, meaning YouTube videos were neither too dark nor too light. This is nothing unusual for low-priced notebooks, and of course, more expensive Chromebooks like the Chromebook x2 and Google’s Pixelbook have much better panels.

Two downward-firing speakers are on audio duty, and they put out a sound that’s good enough for notifications and other system sounds. You’ll want to pull out your headphones or connect a Bluetooth speaker for anything else, including music and video, because the audio is either too soft or it’s distorted at reasonable volume. Highs and mids are muddled, and there’s no bass to speak of.

One of the slowest Chromebooks available today

Lenovo employed a MediaTek MTK 8173C processor in the Chromebook C330. That’s a quad-core CPU running at 2.0GHz, and it’s just barely fast enough to keep up with the lightweight Chrome OS for basic productivity tasks.

Productivity apps like Microsoft’s OneNote are fine, but that’s as far as you’ll want to push things.

We ran our usual Chromebook benchmarks on Lenovo’s 2-in-1, and it’s one of the slowest we’ve tested. Geekbench 4, running in Android, produced a single-core score of 1,446 and a multi-core score of 2,938. The Celeron processor in the Samsung Chromebook Plus V2 came in at 2,107 and 3,656, and that’s slow compared to more modern Chrome OS machines. The Chromebook x2, for example, scored 3,441 and 6,685 thanks to its Intel Core m3 CPU.

In the Speedometer 2.0 test that provides an idea of how well a notebook will surf the web, the Chromebook C330 scored a very low 23.3. That’s the slowest we’ve seen on a Chromebook since we started running this benchmark. Only the Acer Chromebook Spin 15 with its Pentium N4200 processor was as slow, scoring 24.5, and even the Chromebook Spin 11’s Celeron processor managed a 35.4. By comparison, the Chromebook x2 was more than three times as fast at 75.1.

The Chromebook C330 does enjoy 4GB of RAM, and so that’s a plus. You can keep a lot of tabs open in Chrome and run a few Android apps without running out of memory, but you’ll find things to be rather sluggish no matter what you’re doing. At least the 32GB of eMMC storage won’t make things any slower.

When it comes to gaming, this 2-in-1 won’t impress. You can run casual titles no problem, but open up an action game like Asphalt 8, and you’ll suffer a choppy experience. like Microsoft’s OneNote are fine, but that’s as far as you’ll want to push things.

There are 45 watt-hours of battery capacity tucked away inside the Chromebook C330’s chassis, and Chrome OS is a lightweight operating system. Given the low-power CPU and the small, low-resolution display, we thought the 2-in-1 should get great battery life.

We were correct in our prediction. In our most demanding Basemark web benchmark testing, the Chromebook C330 lasted for almost six and a half hours, which is a very good score. The Chromebook Plus V2 lasted for slightly longer than four hours while the Chromebook Spin 11 managed just under four hours.

Simply put, while the Chromebook C330 isn’t a strong performer, it makes the most of its relatively large battery capacity. You get through way more than a day at work or school and have plenty left over for some Netflix binging.

The Lenovo Chromebook C330 has three redeeming features: It’s one of the least expensive Chromebooks on offer, it’s a 360-degree convertible, and it gets great battery life. But it’s also very slow, its display is disappointing, and it feels very much like a budget notebook.

The most direct competitor is the Acer Chromebook Spin 11, which offers up a similar display at the same size and better performance, but it can’t match the Chromebook C330’s battery life. The Acer is also $70 more expensive, and that includes an active pen that supports Chrome OS inking functionality.

You could also spend just about twice as much, or around $600, and upgrade to the HP Chromebook x2. You’ll get a much better display, significantly better performance, and an overall more robust and better-looking build.

There aren’t many good Windows 10 machines in the same basic price range. If you’re willing to spend around $500 and don’t mind a much larger notebook, then you could consider the Acer Aspire E15 with its better performance, especially in gaming, to go with a better 15.6-inch display. You won’t get the same battery life, though, and you’ll be carrying around a bit more heft.

The Chromebook C330 is a plastic build that’s a little bendy in some places, but that doesn’t mean you need to worry about it falling apart. For this much money, it’ll last long enough to pay back the investment. The one-year warranty is industry-standard.

No, unless battery life is your primary concern. Spend just a little bit more for a better Chromebook – you’ll be happy you did.

Best Chromebook deals: Get a new laptop from $99
The best laptops you can buy in 2022
The best Black Friday laptop deals for 2022
Best stylus for tablets and computers: Top pens for note-takers and artists
Almost a week after Black Friday, the Dell XPS 13 laptop is still $250 off
Warhammer 40,000: Darktide will bring your PC to its knees (and you’ll love every minute)
Apple’s M2 Max chip may bring next-level performance to the MacBook Pro
This free service just hit a huge website security milestone
Best VPN services 2022: today’s top picks
This stunning DIY gaming PC dream machine is made of glass
Apple will pay $50M to settle the butterfly keyboard fiasco
This 15-inch Windows laptop is a great buy while it’s just $139
Get Samsung’s 49-inch Odyssey G9 Monitor for under $1,000 today