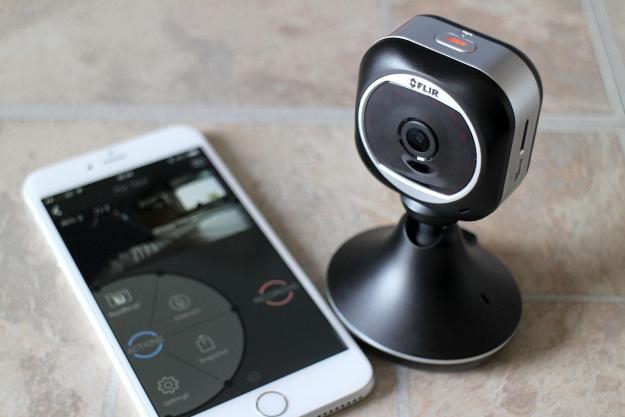 “Versatile, easy to use, and impressively sharp, the Flir FX is let down only by a pricey subscription model.”

Security cameras are dull. They sit in the corner, record your boring day-to-day routine, and maybe prove useful when disaster strikes – if you’re lucky. Not so with the Flir FX. Considering it comes from the same company that makes cameras used by Antarctic researchers, military pilots and firefighters, maybe we shouldn’t be shocked.

It has a clever video playback mode that’s adapted from tech Flir made for the FBI.

When it’s not at home playing sentinel, the camera module detaches from the base and becomes an action camera, ready for use as a GoPro-style cam to record your weekend adventures atop a helmet, or blatant speeding aboard a dash mount. You’ll need one of the optional accessories to make this possible, but it lets the otherwise utilitarian camera moonlight as a toy, like an F-150 out for a night on the town. Just to give it even more cool points, the Flir FX has a clever video playback mode that’s adapted from tech Flir made for the FBI.

The question is: Can it really be good at all of these things?

When it comes to security, Flir has a strong background working for discerning customers from the military to the FBI — but this is its first consumer product. It’s also a mobile-only device at the moment, meaning it operates solely through a mobile app, rather than a Web interface. This may be a restriction for some, but it also puts considerable pressure on Flir to come up with a usable app.

Setting up the Flir FX is simple. There’s a QR code on the base of the stand, and scanning this in the Flir app (Android and iOS) is about all that’s needed to get it up and running, outside of providing a Wi-Fi password and opening a Flir account. The app’s main screen shows a live feed, temperature and humidity levels, plus options to control the recording mode, and access to a few key settings for the cam.

It’s very easy to use, and Flir has opted for big buttons with clear labels, rather than lots of small, technical controls. The cam runs on either battery power or on the grid. The former lasts for about four hours depending on how much activity it records. It’s fine for personal or action use, but for security detail, it has to be powered using the supplied adaptor. Footage is either stored locally on a MicroSD card, of which the cam will accept a maximum of 64GB, or in Flir’s cloud.

FBI surveillance tech at your fingertips

This is where we get to the main selling point — from Flir’s point of view — of the Flir FX. It’s called RapidRecap, and it’s derived from tech Flir produces for the FBI.

RapidRecap can take up to 10 hours of video and compress the action down into a minute or so of footage, overlaying all the key moments into one easy-to watch slice of video. The effect is bizarre. The scene is filled with moving objects, all at the same time, and each with a timestamp telling you exactly what happened and when.

The idea is to end the pain of scanning through hours of video just to see a cat wander into view and set off the motion sensor. RapidRecap not only shows the cat, but everything else that happened in a set period of time, without the time wasting. In the app, you define which period to generate a RapidRecap, and it’s all done in less than a couple of minutes. It takes just a few taps, and because it’s on demand rather than automatically generated, you’re free to set the times which matter the most.

RapidRecap can take up to 10 hours of video and compress the action down into a minute.

It’s an excellent feature, and one that worked faultlessly. However, there is a catch — it’s not entirely free. Flir’s cloud account is free to set up, and it provides three Rapid Recap videos each month. If you want more than that, you’ll have to pay for a Plus or a Premium account, which works out at $10 or $20 per month. If you decide three RapidRecap videos are enough, the camera shoots a 90 second clip every 10 minutes or so, plus each time the motion or sound detection is tripped, and you can review these in the app.

A few too many false alarms

Another handy feature is the ability to set up hot spots. Here, you can define the area where you want the camera to monitor, and ignore other areas. The obvious application is when using the Flir FX outside. You can define an area to watch your driveway and door, but not the public footpath or the road, minimizing false alarms.

False alarms happen, regardless, and it was perhaps the most frustrating part of the Flir FX software. With notifications turned on, it was forever telling me something was happening, when clearly nothing at all was going on. At night, the motion sensor would pick up insects. I turned off the notifications, something that wouldn’t be advisable if it really was guarding my property. That said, the night mode is fantastic, giving a clear view of a darkened room. It doesn’t need switching to night mode either, it just adapts when the light goes away.

It’s also supposed to have a two-way intercom system, which I never managed to make work. My attempts to make the cat wonder where my voice was coming from were useless. The only other negative aspect is the plastic used to make the camera body. It feels pretty cheap, and there are some creaks and groans when you give it a prod.

The camera has a micro USB socket, and when plugged into a PC, you can retrieve any videos you’ve shot, or stills snapped. The camera records locally on to the MicroSD card when it’s not connected to Wi-Fi and syncing with the cloud.

The lens has a 4-megapixel, 160-degree wide-angle sensor capable of shooting 1080p video at 30fps, or 720p for streaming security footage. Expect around 35 feet of standard illumination. The wide-angle effect is superb. I placed it at waist height in the corner of a moderately sized room, and it captured almost the whole scene. Outside, there is enough detail to make out faces from a sensible distance, and there is only a second or so delay in sending footage from the camera to the app, connection depending.

There’s a single button on the top to activate recording, and pressing once takes a snapshot. The base holds the charger, which is a micro USB port, and the pack contains a relatively long cable. The whole thing is weighted well, and sits securely in place. I’ve seen the accessories and they’re all similarly well built, with the action cam container coming with big clips and a water resistant seal to keep the cam safe inside.

Versatile, but that subscription makes it expensive

The Flir FX served as a security camera very well. Outside of the false alarms and annoying notifications — all of which could be tweaked to make them more manageable if you put in the time — it did exactly what was expected. Thankfully it didn’t alert me to any break-ins, but it did reveal what the cat got up to at night. Answer: sleeping.

I liked the fact the Flir FX is very easy to use, and the app is well designed. The FBI-derived RapidRecap videos are generated automatically at the tap of a button, and who wouldn’t want FBI tech in their home security products?

If you’ve never considered a camera like this before, and are concerned the operation will be complex, don’t let it worry you here. Spend a little extra, and the camera can take on a different role, making it more versatile than some of its serious competitors. Being able to remove it from the base and take it out to have fun is a cool bonus. Even if you don’t have use for a security camera on its own, the Flir FX might be just versatile enough to make it worth the purchase.

Video-editing app LumaFusion to get a Galaxy Tab S8 launch
Yale Assure Lock 2 offers a slimmer design and tons of functionality
Amazon’s annual fall hardware event will take place on September 28
IFTTT routines for fall
The best motorized smart blinds for 2022
Best oven deals for September 2022
HelloFresh Free Trial: Can you get your first box for free?
This massive French door air fryer is insanely cheap today
The iRobot Roomba and Braava Jet have sweet discounts today
How to sell your parents on a smart assistant
Best Amazon Echo Deals: Get an Echo Dot for $25
Keurig’s new SMART brewers offer a mind-blowing amount of coffee drinks
The best smart locks for 2022