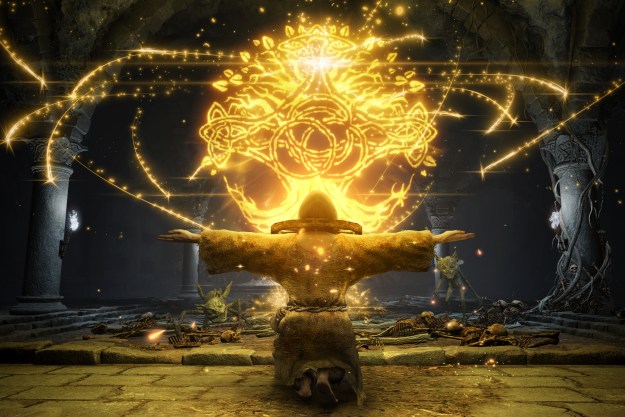 If you have strong feelings about FromSoftware’s games either way, you probably already know what you’ll think of Elden Ring. If you’re a Dark Souls veteran, there’s a fair chance that this takes the throne as your favorite game of all time. For haters who find Souls games tedious and punishing, the praise will sound like a cruel joke. Both sides will have a point.

There’s a good reason that Souls games are so polarizing, and Elden Ring brings the divide into focus. On one hand, it’s an astonishing achievement. The action RPG is frequently mesmerizing, offering the hands down best open-world experience since, you guessed it, The Legend of Zelda: Breath of the Wild. But to give the detractors their due, it’s also a game that demands perfection from players while refusing to clean up the series’ sloppiest quirks.

Don’t let that last part scare you off, though. Despite its lack of finesse, Elden Ring is an all-enveloping adventure filled with incredible landscapes, fantastic enemy design, and deep RPG customization. Even the haters will find something to love here.

If you love Dark Souls …

Elden Ring is going to make a lot of people happy. It takes the ethos of Dark Souls and puts it into a more expansive package without throwing out FromSoftware’s signature ideas. It’s a dark, high-fantasy action-RPG tightly packed with challenging boss fights — a whole lot of them.

Naturally, combat is the heart of Elden Ring. Like any Souls game, battles are all about evading an enemy’s ferocious attack patterns and waiting for the precise moment to strike. What stands out this time is just how many options players have when it comes to creating a combat build. At the start of my journey, I was carefully prodding enemies at a distance with a lance and casting fire spells. By the end, I was summoning an army of spectral soldiers to distract bosses while I performed magic-consuming, whirlwind slashes with a gigantic sword from behind my enemy.

Magic plays a bigger role here than previous Souls games, and it’s a smart move. While Elden Ring doesn’t have difficulty options, spellcasting gives players more flexibility when tackling tough fights. Between spells, summons, and special “Ashes” that can be attached to weapons to give them powerful attacks, there’s a lot to experiment with. New players can essentially create their own set of training wheels through magic, while veterans can ignore the systems entirely and focus on traditional slashing and parrying.

In terms of what you’ll actually be fighting, Elden Ring has no shortage of fantastic boss fights. From fire-spouting dog statues to grotesque flesh gods that roll around like Sonic, each encounter feels entirely different and pushes players to try new strategies. Much of the fun comes from the sense of surprise and discovery each new boss presents. Even in my most exhausting play sessions, I got a hit of excitement every time I was about to enter a cloudy, green boss portal. What fresh hell awaited me on the other side? I always needed to know, even if I knew I wasn’t prepared for the beating that would ensue.

For people who love FromSoftware, none of this is new information. Souls games are immensely challenging, but make the struggle worthwhile for curious players. Elden Ring only amplifies that strength, giving players more tools to toy with and an army of delightfully deranged monsters to use them against.

If you hate Dark Souls …

For those who have never understood the appeal of Dark Souls, Elden Ring’s action is a different story. Even with helpful new features, this is still a tough game that required me to bang my head against individual bosses for hours on end. If that’s never sounded fun, it still won’t be here.

A lot has been made about whether or not these games are “too hard,” but that conversation is a distraction. The real issue is that FromSoftware’s games can often feel too archaic for their own good, adding technical complications on top of gameplay that already requires high skill. Elden Ring is as guilty of that as ever, which is annoying considering that this is the studio’s jump to a more capable console generation.

In many of the fights that gave me the most trouble, I felt like I was fighting around sloppy design rather than dueling a powerful boss. The third-person camera is most notably a mess. When fighting large enemies up close, it’s extremely difficult to see what’s going on. In one fight against a hulking magma dragon, the camera closed in so close that I couldn’t see when it was winding up to attack. I just had to roll at random based on loose sound cues.

There’s always a caveat like that in tough fights. One major boss shoots wind projectiles out, which can clip into the floor, making them difficult to see. Another jabs with a huge rapier that pierces through a stone wall as if it’s not there. Memorizing boss patterns is easy; working around unpredictable technical quirks is much harder. That’s before getting into frame stutters and game crashes, which create additional stress.

In many of the fights that gave me the most trouble, I felt like I was fighting around sloppy design rather than dueling a powerful boss.

Even putting the tech issues aside, the game’s insistence on constant challenge creates puzzling inconsistency that makes it tough to read any given situation. Why does a nine-story reptile slashing me with its claws do the same amount of damage as a pipsqueak grunt tossing a pebble at me? That especially sticks out in the open world. In The Legend of Zelda: Breath of the Wild, players can go anywhere, but difficult enemies make it clear when the player is entering a space they aren’t prepared for. Everything, down to the smallest enemy, is powerful in Elden Ring, so I never understood when I should turn around and come back when I was leveled up.

The list of gripes goes on and on. Stat changes feel like a placebo, as numbers rise with no discernible impact. That makes new systems like Great Runes, which provide temporary stat buffs players get from defeating major bosses, feel superfluous. There’s horseback combat, but it’s a total crapshoot as to whether or not your weapon will actually connect with a foe’s already tricky hitbox.

Souls veterans will learn to live with those quirks, like a teen getting past the taste of cheap beer, but it doesn’t make those issues any easier to digest.

Much of that comes down to the game’s open world, which is one of the best I’ve ever experienced in a game. Rather than leading players through tight dungeon corridors, Elden Ring lets players loose in The Lands Between, a massive continent that snakes around an enormous, golden tree. After creating a hero and getting a bit of setup, players are free to explore every nook and cranny with hardly any restriction.

Players could spend dozens of hours exploring, ogling its gothic art, and uncovering secrets before fighting a single enemy.

It’s an intricately designed space filled with breathtaking landscapes, diverse biomes, and no shortage of discoveries. Rather than taking the Ubisoft route and giving players a map full of question marks, Elden Ring barely ever directs players to anything. The most fun I had came from exploring with no goal in mind. There was always a reward waiting for me no matter where I went, whether it was a mining a cave full of valuable resources or a mysterious shrine that gave me access to powerful spells in exchange for dragon hearts.

The game’s best strength is that it never railroads players into any set path. When I came up against Stormveil Castle’s difficult final boss, I could simply fast travel out at any time and continue exploring. Hours later, I’d come back several levels stronger with a shiny new weapon I found in an underground ruin and a powerful spell I’d grabbed off a dead guy hanging off the side of a crumbling bridge.

I imagine that Elden Ring will be similar to The Legend of Zelda: Breath of the Wild in that few players will actually care about beating its main story — and I mean that in a very positive way. While Game of Thrones’ author George R.R. Martin contributed writing to the game, the overarching story is perhaps the least interesting thing about it (its standard fantasy mumbo-jumbo with lots of kingdom names peppered in). The real fun comes from riding around on horseback, suddenly stumbling upon a stone-giant with a shrine on its back wandering around, figuring out what to do about that, and then comparing notes with your friends.

Like previous Souls games, Elden Ring won’t be for everyone. However, it’s a game that better understands how to let less technically skilled players see why fans love Souls games. Players could spend dozens of hours exploring, ogling its gothic art, and uncovering secrets before fighting a single enemy. I’m confident that you’d still get a fulfilling, lengthy experience playing like that, which is a testament to how spectacular the experience can be when its not getting in its own way.

Elden Ring is a new gold standard for open-world game design, dishing out some of the best freeform exploration since The Legend of Zelda: Breath of the Wild. Curiosity is rewarded at every turn and secrets truly feel secret. For Souls veterans, the number of tools available adds a new level of depth to its combat that makes constant experimentation worthwhile. Even with those strengths, it’s hard to outright ignore the ugly quirks in FromSoftware’s games, which stick out even more on new tech. A stubbornness to fix archaic issues holds back what should be a once-in-a-generation game, but Elden Ring is still a landmark accomplishment in any case.

If you want a similarly organic open-world game without the challenge, The Legend of Zelda: Breath of the Wild will be more your speed. Horizon Forbidden West is also comparable in quality if you want a newer release.

That’s very variable based on how much exploration you do and your skill level, but expect the main story to land around 50 to 60 hours. It feels like there’s over 100 hours of content in total here.

Yes. Even if you hate Dark Souls, Elden Ring’s world is just too astonishing to pass up.

Elden Ring was tested on PC.

Dark Souls 3 PC servers are back online, other titles still to come
New Tales from the Borderlands unveiled, launching in October
Embracer Group continues buying spree, adds Lord of the Rings IP, game studios
Hogwarts Legacy: release date, platforms, gameplay, and more
The best video games of November 2022: God of War Ragnarok, Pentiment, and more
Xbox Series S is cheaper now than it was on Black Friday
This Dell gaming laptop just got a big price cut — now $700
Best upgrades to buy first in Evil West
This Alienware gaming PC with an RTX 3080 Ti is $580 off right now
Warhammer 40,000: Darktide will bring your PC to its knees (and you’ll love every minute)
We need to talk about Pokémon Violet and Scarlet’s funniest evolution
Sonic Frontiers is getting new playable characters and story content next year
How to evolve Dunsparce into Dudunsparce and how to get a three-segment Dudunsparce