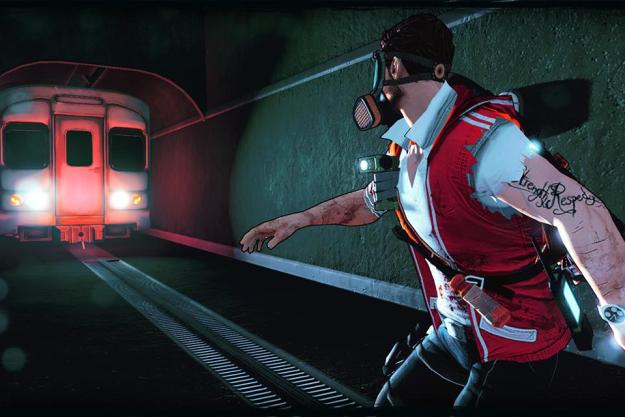 “This spin-off is the unambitious median point in a triple-A market saturated with zombies and stealth-action games that have narrative aspirations.”

Meet Cliff Calo. He’s a white, twenty-something dudebro with journalistic ambitions and serious daddy issues. Along with his sister and college roommate, he has stolen his father’s yacht in order to investigate the rumored zombie outbreak on the tropical island of Banoi.

That’s the same Banoi zombie outbreak from Dead Island, the 2011 first-person zombie survival game from Polish developer Techland. Escape Dead Island is set a few months after the first game on the nearby island of Narapela, where a sinister biochemical billionaire had the lab that created said zombie plague.

Escape Dead Island is a loose assemblage of popular tropes in contemporary gaming.

This game, developed by Swedish studio Fatshark while Yager Developments (Spec Ops: The Line) works on Dead Island 2, is a third-person adventure which dabbles in action, stealth, and story, but doesn’t get very far with any of them.

Cliff sneaks around the island in order to share evidence of the zombie plague’s genesis with the world. Also to earn the affections of his famous journalist father, who has written Cliff off as an alcoholic loser. Along the way, the junior Calo meets Chinese spy Xian Mei from the first game who gives him a couple guns and sends him to fetch a few keycards and elude or kill zombies. Audio logs and other little story collectibles litter the island to fill in the details of how exactly biomedical research led to the creation of a zombie virus.

The game doesn’t do anything you haven’t seen a hundred times in the zombie myth. The twist comes in that Cliff seems to be going insane. Either that or the island has some paranormal happenings akin to Lost–there are a few hatches around. In order to break the monotony of sneaking back and forth through the same arduously long tunnels between the island’s locations, the game occasionally slips into psychedelia. Minor lapses in memory and location grow into full-blown out-of-body episodes, fighting off zombies made of light in dreamy landscapes.

Stealth entails avoiding the zombies’ line of sight and sneaking up behind to stab them in the neck with a screwdriver that you find early in the game. Even the slowest, weakest zombies can kill you with relative ease if they get the jump on you, so often the best course of action is to avoid confrontation, or at least deal with the more challenging zombies before a fight breaks out.

That’s really all that there is to Escape Dead Island. All of the other weapons get an upgrade over the course of the game to add a little variety, but stealth remains exactly the same all throughout. It’s even the exact same stabbing animation every single time, regardless of the context.

The best way to escape Dead Island is to never land there in the first place.

Once they’re on to you it’s all smashing, slashing, and shooting. Mostly smashing and slashing because the guns are not especially useful in a tussle and the clunky animations make switching weapons mid-combat a risky proposition.

Combat is arduous. After dying you can often step back and try a slightly different approach, but some combat arenas lock you in behind invisible walls. In those situations, you can’t escape until you defeat everything or at least get the more annoying zombies to glitch themselves away or fall off a cliff. Fail a few times and the game starts tossing boxes of ammo at your respawn, as if that’s what was holding you back from beating the poorly tuned encounters. By the end of the game when it devolves into a series of psychedelic arena fights, the repetition coupled with the poor design is maddening.

Where the original Dead Island featured some depth in character and weapon customization, Escape Dead Island has only a barebones system of weapons and tools to unlock. It’s similar to Metroid or Zelda, games of that ilk, where finding a new grappling hook or gas mask sends you backtracking across the map to enter a previously inaccessible area. There’s no joy to the exploration though when the most you can expect to find in a secret room are an audio log full of zombie pseudo-science and a couple boxes of ammo.

There’s just no substance to any of Escape Dead Island’s elements. The stealth, combat, and story are all just enough there to hang together, but nothing more. There’s no subtlety or intrigue, no pleasure of discovery in any of it. When the game ends it loops around to start you back in the beginning with slightly more equipment and thus, different options for exploration. But between the shallow mechanics and small handful of locations, the thought of digging up more boilerplate story details is appalling. Most won’t want to continue far enough to even see the New Game+.

Escape Dead Island is a loose assemblage of popular tropes in contemporary gaming. It is the exact median point in a triple-A market replete with zombies and stealth-action games that have narrative aspirations. Protagonist Cliff Calo embodies the game’s middle-of-the-road ambitions. He is a transparent vehicle of identification for the fratty, white dudebros to whom the gaming industry’s lowest common denominator stereotype caters. This is a game dreamed up by a robot that has been fed only AAA press releases.

The best way to escape Dead Island is to never land there in the first place.

This game was reviewed using a Steam code provided by Deep Silver.