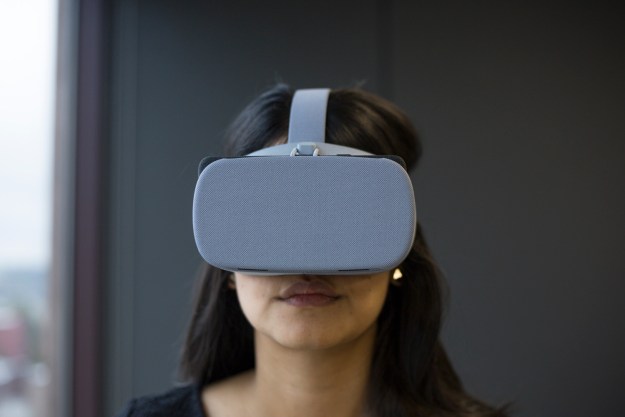 Virtual reality was all the rage last year. The HTC Vive and Oculus Rift VR systems released to much fanfare; Samsung unveiled its consumer version of the Gear VR mobile headset in late 2015; and Google debuted its Daydream VR platform and Daydream View headset towards the end of 2016. This year, the hype has died down somewhat. Nokia even discontinued its Ozo VR camera, citing “slower-than-expected development of the VR market.”

But that doesn’t mean there haven’t been any improvements or new additions to the space. Facebook’s Oculus recently unveiled a standalone headset that’s coming next year, and Google also announced it’s working with Qualcomm, Lenovo, and HTC to introduce untethered mobile headsets that do not require a phone or computer. While we’ve yet to learn more about those devices, we’ll have to make do with Google’s 2017 update to last year’s Daydream View headset. In our review, we found that while the headset doesn’t add much in terms of new stuff, it greatly improves the experience and it’s still one of the most comfortable VR headsets we’ve tried.

Daydream is Google’s mobile virtual reality software platform. Put a supported headset on with a supported phone, and you’ll be placed in a forest with a floating screen of apps and media content. You can look around in 360-degrees by moving your head around, but the headset does not track your position in the room like some high-end VR headsets do — it’s best used on a swiveling chair.

In the Daydream environment, you have access to the Google Play Store, allowing you can install games, apps, or download movies directly in VR. Familiar media services are also available with “VR” attached to them: YouTube VR, Hulu VR, Netflix VR, and more. You’ll primarily want to watch 360-degree content here for the full, immersive experience, but regular videos will play as usual, with you sitting in a comfy living room staring at a large, rectangular screen.

Since its launch last year, the Daydream platform has grown considerably. There are hundreds and thousands of videos you can watch, and a plethora of games. VR’s biggest problem is its lack of appealing titles and content to keep us coming back, and we’re happy to find lots more to dig through on Daydream. Still, just because there are more games, doesn’t mean they’re great. A lot of titles, like Gunjack 2: End of Shift, tend to feel quite repetitive.

There are a lot of free games and content to peruse, but do note that you’ll have to cough up some dough for certain apps and games. Thankfully, most of the paid content is affordable, often under $5 and $10.

Daydream View and its improvements

Daydream View is Google’s headset for the Daydream VR platform. It comes with a controller, but there’s not much tech in the actual headset itself.

We loved last year’s design and material, and said it looks and oozes comfort — almost like breathable sweatpants. However, once you put the new Daydream View next to the 2016 model, you’ll immediately notice the difference. The 2017 design itself is very similar, but everything feels more rigid and tight. The material is textured almost like canvas, the strap is firmer, and the inside lining (removable facepad) where your face rests is softer and more comfortable.

Since its launch last year, the Daydream platform has grown considerably.

We still prefer last year’s softer exterior fabric, but this year’s Daydream View certainly looks smarter. It has a better fit, and there’s an extra strap that goes over your head for additional support (you can remove it if you don’t want it). There’s no need to worry if you have glasses, we had no problems wearing the Daydream View over ours, and the same is true with last year’s model.

Unlike the first generation headset, you can no longer stow away the controller on the inside of the front flap of the new View. Google suggests putting the controller in a loop on the rear strap. It makes sense — we hardly transported our headset, so there wasn’t much of a need to stow the controller. The option to place it in the strap is just as convenient.

The flap where you put your phone now doubles as a magnesium heat-sink, which helps with a very real problem with VR: Burning hot phones. Last year, our Pixel XL often got incredibly hot after about an hour of VR use, causing games to stutter and slow down. We’ve already seen the heat-sink on the new headset help a lot. We played a few games and watched some 360-degree content for about an hour, and our Pixel 2 XL only got warm. This means you should be able to spend more time in VR without heat forcing you to stop.

But the best improvement over last year’s Daydream View is the 10-degree wider field of view. It’s easy to notice the difference when switching between the 2016 and the 2017 model. Ten degrees might not sound like much, but you’re able to see a great deal more on the screen, and best of all there’s far less light leak. Last year’s headset had gaps on the sides and near the nose, which allowed light to leak in from outside and disrupt the experience. You can always turn off the lights, but that’s merely a half-measure. There’s almost zero light leak with the new headset, though we did see a few gaps near the nose — you may have to adjust the headset so everything is completely covered.

The Daydream View is also a bit heavier than before, and while it’s not as comfortable, it’s still takes the crown as the comfiest mobile VR headset. It’s primary competitor is Samsung’s Gear VR, which uses hard plastic. It’s bulkier, heavier, and not as attractive or comfortable.

Not much has changed with the plastic controller. It fits perfectly in the palm of our hands, kind of like a Nintendo Switch Joy-Con, and feels smooth to the touch. The controller now matches the color of the headset you buy, instead of always being a dull gray. There’s an indented trackpad that can recognize swipes and presses, an App button, a Home button, and a volume rocker on the side. Press and hold the Home button to re-center the home screen or the action in any app or game. The biggest physical difference is that the App button is now raised to differentiate it further from the Home button.

You’ll ideally want to use a device with a higher resolution as everything will just look better. Playing a game on the Pixel 2 XL, for example, looked a lot better than on the Pixel 2. There’s no support for iOS yet, so don’t expect to use Daydream with an .

One of the best parts about Daydream is how easy it is to jump right in. You just need to make sure the Daydream app is installed — if not you can find it on the Google Play Store. Place the phone on the inside of the flap, and an NFC sensor will detect it. Your phone may ask you to press and hold the Home button on the controller so it can pair with it. Once done, Daydream mode should automatically launch on your smartphone. Just close the flap and attach the rubber strap to the “front door latch” to keep it secure.

It’s all pretty simple after that. You’ll see a pointer — that’s the direction your controller is pointing. Use it to point at apps or games you want to open and press the trackpad. The controller feels far more responsive and Google said it did make it more accurate. We have yet to run out of the controller’s 220mAh battery, but if you run out of juice, there’s a USB Type-C port you can use to charge it.

While playing a variety of test games (including Eclipse: Edge of Light, and Gunship Battle 2), we had no issues with performance. Most of Daydream View’s supported devices run the Snapdragon 821 and the Snapdragon 835, so you shouldn’t run into any issues. The games we’ve been trying have been fun and interactive, but we’re not so sure if there’s enough here to keep us coming back six months from now.

Watching YouTube videos in VR is comfortable enough, though we still prefer a traditional screen without the headset wearing us down. It still feels as though you can easily exhaust your options of good 360-degree content.

At times, mobile VR feels very much like mobile gaming. Games largely feel repetitive, with a few exceptions, and it’s best to play brief sessions. The best part about the new Daydream View experience, though, is how you can easily cast what you see to a Chromecast-enabled TV. It worked seamlessly for us, and it certainly allows you to extend the fun with more people.

The Daydream platform has come a long way since last year, and we’re excited to see where it will go in the coming months.

The 2017 Daydream View costs $20 more than last year’s model, setting you back $100. You’ll need a compatible phone too — the cheapest being last year’s ZTE Axon 7. It’s available for purchase now in sessions gray, black, and coral.

For a limited time, Google is offering $40 of Google Play Store credit when you purchase the new Daydream View. That should be plenty to get you started with some great games.

Google offers a standard limited warranty that protects your device from manufacturing defects one year since the date of purchase.

At this price point, your next best option is the Gear VR from Samsung. It’s not as comfy, but it has a large library of good games — some of which are also available for the Oculus Rift. The problem is you need a Samsung phone to use it. If you don’t want to switch to a Samsung , Daydream is your best bet.

You may want to wait to see what Google and its partners have cooking for standalone VR headsets. These devices will not require a phone, nor will they have any cables that tether them to a computer. We’re likely going to see news about them closer to the end of the year, so it may be worth the wait. Chances are good they will be more expensive – but also more advanced.

Last year’s Daydream View 2016 continues to work perfectly well, and it’s receiving a lot of the software improvements seen here. Considering there’s not much tech in the actual headset itself, we imagine the 2017 unit will continue working for three to four years, if not more. It largely depends what direction Google takes the software.

Yes, if you’re interested in VR, the Daydream View (2017) is currently the best mobile VR headset to buy. The landscape could change soon, though, as standalone headsets make their way into the market.

Topics
Video-editing app LumaFusion to get a Galaxy Tab S8 launch
The best OLED laptops for 2023
The best gaming tablets for 2023
The best gaming speakers for 2023
The best USB-C monitors for 2023
Despite divisive dialogue, Forspoken gets a lot right about open-world games
The best RPGs for the Nintendo Switch
How to link your Fire Emblem Engage and Fire Emblem Heroes account
Xbox and Bethesda’s Developer_Direct: how to watch and what to expect
Goldeneye 007 comes to Game Pass and Nintendo Switch later this week
The best iPhone games in 2023: 31 games you need to play right now
I can’t believe I’m recommending Forspoken on PS5 over PC
Redfall’s May 2 release date revealed during Developer_Direct