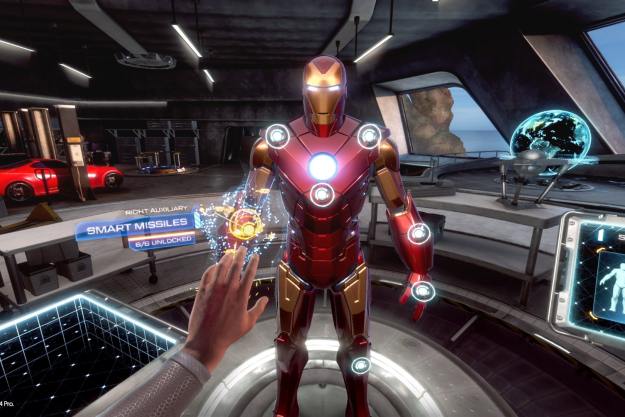 In any other year, Iron Man VR would have flown under the radar. Despite all the simulated heroism and explosions, it’s the kind of licensed superhero fare that feels lean next to a muscular Marvel Studios film.

But, of course, 2020 isn’t any other year. Moviegoers won’t be packing theaters to catch the next chapter of the Marvel Cinematic Universe anytime soon. Iron Man VR might be the closest thing fans will get to a summer blockbuster this year. It’s not an ideal substitute, but the thought of traveling to a fantasy world where good always beats evil sounds more appealing when hope is in such short supply.

While it doesn’t fully live up to its promising potential due to technical limitations and an overall lack of polish, Iron Man VR provides enough fun, action movie heroism thanks to its creative control scheme.

Iron Man VR can be best described as a first-person aerial dogfighting game. Players step into the iconic red-and-gold armor for an original story about a mysterious hacker who has turned Tony Stark’s deadly drones against him. Much of the adventure is spent flying around arena-like locales and blasting waves of robots out of the air.

Both of those actions are accomplished through the PS Move controllers with varying degrees of success. Flying involves holding the Moves straight down and pressing the triggers to boost forward. Pivoting the controllers left or right moves the suit in that direction while tilting them horizontally raises the altitude.

It’s not the most seamless VR flight game, but when it all comes together it’s an undeniably cool experience.

It seems intuitive at first, but it becomes more complicated when steering comes into play. Players can tilt their heads around to turn, but the most effective way to move is to press a button to snap-rotate the camera. Flying becomes a tricky balance between controlling the character’s position in the game and staying centered with the PlayStation Camera in physical space.

It’s not the quickest learning process. In the game’s early missions, I found myself fiddling with my arms and neck, struggling to get a smooth flight pattern started. It felt like I was playing out a scene in a Spider-Man movie where a freshly bitten Peter Parker flails around rooftops trying to learn the mechanics of his webs.

All that trial and error felt worth it once the controls finally clicked. In one standout mission, players soar through a rocky canyon in hot pursuit of a runaway villain. It’s a standard video game chase scene, but it’s also a sequence that rewards the player’s mastery. As I raced through narrow passages and weaved around craggy cliffs with ease, I started to actually feel less like an adolescent Avenger. Instead, the PSVR headset felt like the Iron Man helmet, and the Move controllers became palm boosters. At that moment, I was a superhero hurtling through the air with panache.

It’s not the most seamless VR flight game, but when it all comes together it’s an undeniably cool experience.

The action side of the game has its own ups and downs. While in flight, the Move controllers can be raised up to fire at enemies. Pointing one straight like a sword lets players fire blaster shots from their palm, while tilting it down activates an auxiliary attack, like homing missiles, from the suit’s wrist.

When everything’s working as intended, it’s like all that time spent playing superheroes as a kid finally paid off.

Like flying, shooting takes a bit to get the hang of. The nuance of wrist placement makes it difficult to consistently trigger the intended power during fast-paced battles. Flying and shooting at the same time is its own struggle, which requires players to juggle two separate motions. If flight already feels like it’s taking full focus, the tandem action will feel downright impossible to execute.

Even with the finicky controls, firefights are often fun and frenetic. The waves of jellyfish-like drones give players plenty of moving targets to test their skills on. There’s something uniquely satisfying about using one hand to palm blast incoming enemies on the right while using the other to target five ships and destroy them in one swoop with a barrage of wrist missiles.

Iron Man VR adds in some extra gestural gameplay to increase that feeling of heroism. Holding a button and swinging the controller unleashes a powerful punch that can knock enemies back. There are plenty of other familiar comic book moments, too. Players will pull open impossibly heavy gates and dislodge an airplane’s stuck landing gear through the adventure. That kind of tactile design feels more exciting than rapidly tapping X to perform a feat of strength does in your average game.

The overall combat can feel a little simplistic at times, especially compared to a superhero game as varied and fluid as Marvel’s Spider-Man, but the physicality of VR allows for extra experimentation in fights. When everything’s working as intended, it’s like all that time spent playing superheroes as a kid finally paid off.

Despite a creative approach to controls, Iron Man VR stumbles in its presentation. The story itself is a ho-hum collection of genre cliches, from tortured heroes to predictable red herrings. The constant witticisms feel like they were plucked out of a seminar on how to write a Marvel movie.

The visuals don’t fare much better. Many of the textures wouldn’t look out of place in your average Nintendo GameCube game, and the biggest set pieces tend to fall flat with lackluster effects. That normally wouldn’t be a deal-breaker for VR, but superhero games live and die by spectacle. Iron Man VR presents a lot of potential, but it can’t always deliver its blockbuster moments. Explosions fizzle out anticlimactically more often than they thrill.

It’s not that the game doesn’t feel complete. It’s a weighty package with an eight-hour story, plenty of bonus missions, and full suit customization to play with. The issue boils down to a lack of polish, which feels jarring for the genre.

Love them or hate them, Marvel movies have boiled entertainment down to a science. These superhero adventures are carefully engineered to provide consistent fun for fans. Even at their weakest, it’s rare to see a crack in that ironclad formula.

Iron Man VR presents a lot of potential, but it can’t always deliver its blockbuster moments.

Iron Man VR, on the other hand, is a game where players are constantly seeing the seams. Its technical limitations always poke through, whether in the form of recycled mission locations or excruciatingly long load times. Those limits are especially noticeable in the game’s home base scenes, where Tony Stark’s arms tend to twist and contort in ways that would make a surgeon wince.

The frequent breaks in escapism hold Iron Man VR back from reaching new superhero heights. There are flashes of Avengers action, but the experience is more akin to Tony Stark piloting his Mark I armor for the first time and trying to work out the kinks.

Iron Man VR is an entertaining escape that finds creative ways to transform motion controls into heroic stunts, but it lacks the thrills and polish needed to make it feel like a true Hollywood spectacle.

The story takes around eight hours, and the game features races, combat trials, and free-flying to add some extra weight to the package.

Yes, if you have a PSVR and Move controllers laying around. If you don’t own either, it’s not enough of a killer app to warrant a full VR investment.

Topics
PlayStation VR2 launches in February and it costs more than a PS5
Meta Quest 2 is getting a former PlayStation VR exclusive and more this fall
PlayStation VR games are not backward compatible with PlayStation VR2
Marvel’s Spider-Man: Taskmaster challenges guide
How to charge a Nintendo Switch controller
Best gaming laptop deals: Save on Alienware, Asus and more
Best Alienware Deals: Save on gaming laptops, PCs and monitors
The best video games of January 2023: Hi-Fi Rush, Dead Space, and more
With Valiant Hearts: Coming Home, Netflix finds its video game voice
The best guns in Dead Space
The Crew Motorfest brings a racing festival to Hawaii this year
The best skills to inherit in Fire Emblem Engage
Dead Space: how to fix the centrifuge