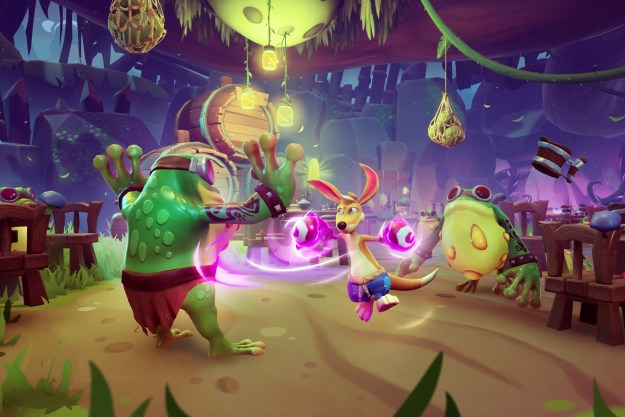 “Kao the Kangaroo is a fun 3D platformer franchise revival with solid platforming and less-than-solid narrative.”

Tate Multimedia is giving a forgotten-turned-beloved platforming mascot a second chance with the rebooted Kao the Kangaroo. This new game, which shares a name with the franchise itself, shows why now is truly the perfect time to bring Kao back. Nowadays, there are a plethora of independent 3D platformers that don’t have to worry about being drowned out by the big AAA platformers, like Kao was back when it first emerged.

While Mario, Crash Bandicoot, Rayman, and Spyro the Dragon were ultimately the platforming mascots that stood the test of the time the best, they are far from the only memorable characters to headline 3D platforming games. Popular YouTube video and Twitter hashtags helped bring this series back, and the effort from fans was mostly worth it. Devilishly simple but surprisingly memorable in most aspects of its design, this classic Kao the Kangaroo is an enjoyable platforming romp despite some shortcomings.

It may be an easy platformer with poor voice acting and a bad story, but Kao the Kangaroo delivers fundamentally enjoyable gameplay in a vibrant world, showing how even the less well-remembered platformers from the genre’s heyday have a better chance at getting the love they deserve now than they did 20+ years ago.

Kao the Kangaroo - Release the Power of the Gloves!

During the late 90s and early 2000s in particular, many developers took cute animals, machines, or kids and turned them into the star of an exciting platformer for players of all ages. Kao the Kangaroo is one of these series, with the first three games in the series being fun, if unambitious, platformers in the vein of games like Crash Bandicoot and Rayman 2.

The rebooted Kao the Kangaroo feels as simple as classic 3D platformers from the N64, PlayStation, and Dreamcast era, but with modern visuals and design intuition. It is a level-based platformer where the player’s primary goal is to make their way to the end of the stage while getting as many collectibles as possible. Like the classic Kao games, this reboot isn’t the most original concept from a gameplay standpoint but executes this tried and true idea well.

Kao the Kangaroo has a vibrant and joyous visual design. While animations obviously aren’t as fluid as AAA games like Crash Bandicoot 4: It’s About Time or Ratchet & Clank: Rift Apart, Kao the Kangaroo’s visuals are still full of charm as Kao takes big strides as he walks and can still pull off some of his unsettling visuals moves — namely extending his neck underwater or while hanging from nets.

The game’s levels are spread across four hub worlds and fit naturally into each area’s design and theme. Every level feels distinct thanks to clear visual theming, distinct color pallets, and unique enemies in each hub. Exploring the relatively safe but jungle-filled Hopalloo Island feels much different than making my way through later levels, like a spa resort located on the top of an icy mountain overtaken by an evil force.

“Kao’s gameplay feels ripped right out of the early 2000s in a good way.”

It might not be AAA quality, but it looks and feels like a Kao the Kangaroo game should. The game even includes Kao’s original design as a costume if you really want to complete that throwback feeling.

Kao’s gameplay feels ripped right out of the early 2000s in a good way. Kao moves slower than your typical platformer protagonist and has a relatively tame move set that consists of a double jump, punch, ground-pound, roll, and spin in the air. While it might not be as complicated as Super Mario Odyssey, it still gets the job done thanks to Kao the Kangaroo’s more relaxed pace and level design that accounts for the game’s speed and Kao’s moves quite well.

While I’m not sure this will be the most fun platformer to speedrun because of that slower pace, the mobility is still diverse enough to enable shortcuts in bigger levels once players learn how to string some of Kao’s moves together. While combat is pretty simple (you’ll mainly use Kao’s basic three-hit combo), fights never overstay their welcome. Platforming and combat are also spiced up when players augment Kao’s gloves with fire, ice, and wind, although these upgrades are temporary and level-specific.

While Kao isn’t the most ambitious platformer in terms of gameplay, it focuses on the fundamentals and gets them right. Kao the Kangaroo is fun to play, and even the most casual of gamers should be able to pick the game up and enjoy it.

Because of that, the game never gets that challenging. I only died a few times throughout the adventure and had more lives than I knew what to do with by the end of the experience. That’s disappointing for those of us who like a good challenge from our platformers, but thankfully exploring every nook and cranny of each level for collectibles is just as rewarding as a tough stage would be. Ultimately, Kao the Kangaroo feels like a throwback to when 3D platformer could just be pure, simple fun and not have to worry about redefining the genre or sporting AAA animation and visuals.

That’s why it’s frustrating when the game stops the player in their tracks to emphasize the story.

Be aware that your first time through Kao the Kangaroo, you’ll constantly have to endure a lackluster story. Even though Tate Multimedia developers admitted in an interview with Digital Trends that the narrative wasn’t a place they could compete with AAA games, there’s still a shockingly significant focus on it here that does more harm than good.

The plot revolves around Kao’s attempts to find his missing father and sister and his fight against an evil Eternal Warrior and a dark spirit within his gloves. It’s a fairly generic “save the family and the world” tale you’ve seen before, and the twist villain is evident from a mile away. It’s an unnecessarily ambitious story for a franchise whose first game was about Kao rescuing his friends from an evil hunter.

“The story just ends up feeling like something you need to sit through.”

Still, this plot could’ve been salvaged if it worked as a fun Saturday morning cartoon. Sadly, weak voice acting and writing mean that it doesn’t hit those highs. In particular, Kao’s voice actor unfortunately never feels like he delivers his lines quite right. as he consistently puts the emotional emphasis on the wrong words. It’s hard to connect with anything going on when the game’s protagonist is so annoying. Other characters, like Kao’s mentor Walt, also just sound stilted in their line delivery, making most of the voice performances in this game feel very amateurish.

The dialogue itself delves into cliché, and its humor boils down to meme references to the game’s determinant. An exchange where Kao’s mother references Skyrim’s “arrow to the knee” meme and Doom’s “rip and tear” mantra left me particularly baffled. Kao the Kangaroo never needed deep narrative or frequent voice acting to be great, and Tate’s attempt to bring those in hurts the quality of the experience. Thankfully, you can skip all the cutscenes, although miss out on important context for each level.

Ultimately, the story just ends up feeling like something you need to sit through so this series can reestablish its narrative identity before getting you to the next dose of fun platforming. Thankfully, that platforming feels fun and rewarding, if not particularly challenging. Tate Multimedia knows how to make an enjoyable 3D platformer, so I hope this isn’t the last we see of this 22-year-old Kangaroo. More of these obscure but beloved series deserve to get modern follow-ups, not just the big guys like Mario and Crash Bandicoot.

Kao the Kangaroo might not be the most innovative, difficult, or narratively satisfying platformer out there, but this game still nails the basics. As such, any fan of modern 3D platformers will find a lot to enjoy with this reboot of Kao the Kangaroo and maybe even be inspired to check out the forgotten classics Kao starred in.

The closest modern comparisons are titles like SpongeBob SquarePants: Battle for Bikini Bottom — Rehydrated and Crash Bandicoot 4: It’s About Time. If those 3D platformers were your cup of tea, then you’ll dig the new Kao the Kangaroo.

Kao the Kangaroo isn’t a massive game, so most players should see and collect everything the game offers within 8 to 10 hours. If you aren’t trying to be a completionist, it will be much shorter than that.

Yes. This isn’t the next classic 3D platformer, but it’s a welcome revival of a classic platformer mascot that never really got the love it deserved.

Kao the Kangaroo was reviewed on Xbox Series X.