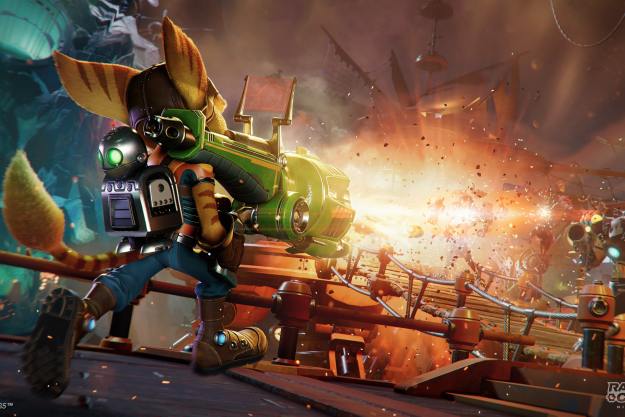 Insomniac sure know how to make a superhero game. Over the past few years, the studio has pumped out two excellent Spider-Man titles full of death-defying action and big-budget set pieces that could make Kevin Feige jealous. So it comes as no surprise that Ratchet & Clank: Rift Apart is a full-blown Marvel movie turned video game.

It’s a natural evolution for one of Sony’s most enduring first-party franchises. While it started out as a standard 3D platformer in an era where Sony was churning out animal mascots, it’s only pumped up the galactic spectacle over the past two decades with each new console. With Sony’s most impressive hardware to date in the PS5, Insomniac Games can finally flex its Hollywood chops and turn the duo into convincing, pint-sized Avengers.

Ratchet & Clank: Rift Apart is a technical powerhouse filled with thrilling platforming set pieces and bustling environments. Its arsenal of weapons doesn’t quite reach the creative highs of previous installments, but the visual razzle-dazzle makes for a fun summer blockbuster.

Like previous games in the series, Ratchet & Clank: Rift Apart is a third-person platformer that’s heavy on action. The titular Lombax hero Ratchet scours planets for collectibles while carving through waves of enemies, while the robotic Clank tackles puzzle interludes. That’s always been a winning formula for Insomniac, and the secret sauce hasn’t changed much here. Everything’s a little bigger and flashier, but the core gameplay is still a rock-solid foundation.

The main difference this time is that the game plays around with alternate realities. Ratchet finds himself lost in a dimension where his rival Dr. Nefarious has finally gained control of the galaxy. It wouldn’t be a “mirror world” story without doppelgängers, so the game features a second Lombax named Rivet who players control just about every other level. Functionally, she’s exactly the same as Ratchet, which feels like a missed opportunity. Gear, weapons, and upgrades are shared between both Lombaxes, so it feels like playing the same character with a palette swap from planet to planet.

It’s hard to complain about that too much when the minute-to-minute Lombax gameplay is so fun. Each level is a finely crafted amusement park filled with exciting rides. When players aren’t searching for secrets or blasting enemies, they’re zipping off-ramps on the back of a bug or grinding on rollercoaster-like rails as explosions go off in every direction.

That’s where the superhero DNA really starts to become apparent. Playing through a world really feels like blazing through a different Hollywood action set piece. That can make the experience feel disjointed at times, as the game’s oddly convoluted story feels like a way to justify stitching dozens of disparate ideas together. But like any good blockbuster, it’s best enjoyed sitting back and letting the colorful sensory explosion take over.

No superhero movie is complete without some sidekicks. The Clank sections are sparse, but a perfectly fine change of pace. They revolve around simple ball puzzles where Clank has to safely lead projections of himself to an exit using orbs that can make them speed up, jump, and more. The more exciting side missions come from Glitch, a miniature mech that Ratchet deploys to fight off microscopic viruses. They’re little shooter sections that feature some mind-bending movement, effective haptic feedback, and the game’s most charming original character.

Ratchet & Clank: Rift Apart isn’t the most narratively compelling adventure out there, but it delivers the same thrills as Insomniac’s Spider-Man games. The heroes are just a bit furrier.

The Ratchet & Clank series sets itself apart from other mascot platformers with its emphasis on action and that holds true here. Rift Apart gives players a buffet of guns and grenades to experiment with. The game does an excellent job of incentivizing players to use them all rather than to pick one and call it a day. Every weapon can be leveled up, which expands its personal upgrade tree. I found myself cycling between my guns in every battle, genuinely driven to see what each one could do in its final form.

Compared to previous entries, the arsenal is a little tame this time around. There are plenty of returning favorites, but few of the new weapons feel as creative as tools like the Groovitron or Qwack-O-Matic, which turned enemies into ducks in Up Your Arsenal. The most memorable tool is the Topiary Sprinkler, which temporarily turns enemies into shrubs. That’s one of the few weapons that nails the slapstick combat the series excels at.

I found myself cycling between my guns in every battle, genuinely driven to see what each one could do in its final form.

It feels a bit like Insomniac played it straighter to better take advantage of the PS5 DualSense controller. Many guns have alternate fire modes or quirks that utilize the controller’s adaptive triggers. The Headhunter sniper zooms in closer depending on how hard the left trigger is held down, for example. Not every gun makes use of that idea, but the ones that do add a little extra depth to the shooting.

It’s a fun use of the tech, but it can admittedly be a pain point. And I mean a literal one. The trigger resistance gets physically exhausting. With a weapon like the Ricochet, players need to hammer down the right trigger multiple times to thwack enemies. The trigger press is so hard that I found myself switching to my middle finger just to give my pointer a break. Returnal really nailed how to design gunplay around adaptive triggers with its alt-fire system, but I imagine many players will find themselves turning the feature off entirely here.

The gunplay is perhaps a little overworked to fit around the PS5 itself, which is something we’ve seen in games like Destruction AllStars. Even with those quirks, the combat is still joyously chaotic. When I electrify a creature with a gun, I create a perfect moment of “comic mischief” where my stunned enemy shakes in place like a cartoon character after sticking a fork in an outlet. Shooting a creature is always rewarded with some kind of detailed animation that’s a delight to watch.

If Returnal is the best showcase of the PS5 controller, Ratchet & Clank: Rift Apart is the game that best shows off the console itself. It’s a visually jaw-dropping game that plays like a CGI movie. There were moments where I didn’t even realize I had regained control of the character after fluidly coming out of a cutscene. The worlds are so intricately detailed that they look like they belong in a pre-rendered cinematic.

In a lot of ways, Ratchet & Clank: Rift Apart is the best example of just how powerful this current generation of consoles is.

Take a location like the game’s opening world, a small slice of a bustling city. It isn’t just a few key buildings with some NPCs milling about. The sky is filled with flying cars zipping around overhead and neon signs blinking far off in the distance. For an even simpler pleasure, smack a wall of boxes and enjoy the particle explosion that ensues as hundreds of wood splinters and bolts fly off in every direction.

The real star of the show is the PS5’s SSD, which Insomniac takes full advantage of. Ratchet and Rivet get a tether that can be used to zip through portals, seamlessly teleporting them forward in a technical magic trick.

That’s especially useful for the whole alternate dimension angle. There are “pocket dimensions” scattered throughout levels, which take players to a completely different challenge stage with zero load time. Whenever games try to pull tricks like that, there’s always some secret seam that it uses to hide the wait. Just look at God of War, which uses a mystic zone to hide loading between areas. If those moments are happening behind the scenes in Rift Apart, they are entirely invisible.

In a lot of ways, Ratchet & Clank: Rift Apart is the best example of just how powerful this current generation of consoles is. It delivers spectacle on top of spectacle, creating gaming’s own version of “movie magic.” I just wanted to dig into a bag of popcorn throughout the whole adventure.

Ratchet & Clank: Rift Apart is another great PS5 exclusive that really shows what the hardware is capable of. It’s a visually detailed platformer filled with three Iron Man movies worth of thrills. The shooting suffers a bit due to some overeager DualSense integration that’s a literal pain, but Insomniac has created a colorful blockbuster that’s loaded with good, old-fashioned comic mischief.

If we’re considering this a superhero game (which it is), it’s about on par with Marvel’s Spider-Man. Super Mario 3D World + Bowser’s Fury offers a fair bit more value as far as platformers go.

The story takes around 10-12 hours and I had hit 100% within 15. There are good reasons to play again though as weapons can be leveled up more the second time around.

Yes. It’s another strong exclusive for the PS5 lineup and one that really gets the most out of the system.