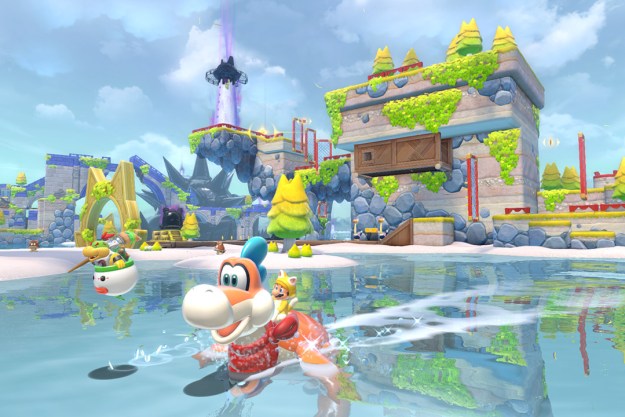 “Super Mario 3D World + Bowser's Fury is a must-own Switch bundle that contains two wonderfully creative Mario games for the price of one.”

Super Mario 3D World + Bowser’s Fury is positively brimming with joy. From its bright colors to its adorable cats, it’s the perfect game to close out Mario’s big 35th-anniversary bash.

Originally released on the Wii U in 2013, Super Mario 3D World was a sort of return to form for the series after more experimental mainline Mario outings like Super Mario Sunshine and Super Mario Galaxy. With its Nintendo Switch rerelease, the standout platformer now has a chance to spread cheer to a wider audience of Switch owners. Nintendo even brought a plus one to the party, packing in an extra adventure called Bowser’s Fury.

Taken as a complete package, Super Mario 3D World + Bowser’s Fury is a must-own game for Nintendo Switch owners. The original Wii U platformer is still as vibrant and delightful as ever, and the new Bowser’s Fury mode iterates on some of the franchise’s best recent ideas to create a memorable adventure in its own right.

Those who never got to experience Super Mario 3D World on Wii U are in for a treat. The game is a traditional 3D Mario title that focuses on clever level design and power-ups above all else. Nintendo quite literally has level design down to a science, and the 12 worlds present in this gameplay like a developer flex. Each stage is overflowing with creative spirit, from a Super Mario Kart-style speed gauntlet to an underground level that mostly plays out in silhouettes.

The bright music, vibrant colors, and general tone all come together to form a game that’s just so happy to entertain without pretension.

The most immediate feature is the cat suit, which turns Mario and his pals into full-fledged felines who can scramble up walls. It’s not just a cute gimmick; the cat suit is one of the franchise’s best power-ups. It’s both an ingenious design consideration that allows for more verticality in levels and a friendly tool that makes the platforming more forgiving. There’s something so satisfying about being able to salvage a botched jump by clinging onto the side of a cage and clawing back to the top.

But Super Mario 3D World is so much more than just the cat suit. Other items, like a cherry that can clone Mario or a giant ice skate, shine just as bright. The overworld is full of secrets and minigames, making it fun to just explore the map between stages. There’s even the diorama-set Captain Toad levels, which were so delightful that they spawned their own game. Every element is so lovingly crafted and nothing feels like superfluous filler.

It never once feels outdated despite being eight years old, but that doesn’t mean it’s perfect. The movement feels clumsy and slow compared to other 3D Mario games. While Super Mario Odyssey lets players string together different jumps to make for some surprisingly complex movement, 3D World feels much more limited. Any time I did a backflip, it was entirely by accident. The game also features some torturously slow auto-scrolling levels, which can kill the pace. Most of my deaths just came from impatiently running too far ahead as the screen moved at a snail’s pace behind me.

Even with those flaws, it’s hard not to be utterly charmed by Super Mario 3D World. The bright music, vibrant colors, and general tone all come together to form a game that’s just so happy to entertain without pretension. It’s a more successful Mario party than Mario Party.

For those who have already played Super Mario 3D World, Bowser’s Fury is the star of the bundle. The entirely new mini-adventure goes above and beyond what’s expected from a package like this. While Nintendo has dropped unmemorable side-games with re-releases like Mario & Luigi: Superstar Saga, Bowser’s Fury is so enjoyable on its own that its puzzling players don’t have the option to buy it as its own standalone download.

The premise is simple and hilarious. Bowser has grown to Godzilla-sized proportions for some reason and Bowser Jr. has to team up with Mario to bring his dad back down to size. Mario must travel around a series of islands and collect enough cat shines to morph into a cat kaiju himself. Sometimes, you forget how funny Nintendo can be.

The islands are dotted with platforming challenges and objectives that seamlessly weave in and out of one another. Imagine if Nintendo took an entire world of Super Mario 3D World and linked all those disparate zones together on one wide-open map. Like Super Mario Odyssey, the result is a relaxing, free-roaming vacation that’s filled with rewards and secrets.

The entirely new mini-adventure goes above and beyond what’s expected from a package like this.

The main event is, of course, Bowser. The oversized Koopa occasionally rises from the water, reigning fire on Mario. That created for some tense moments where I’d be slowly making my way through a tricky platforming section, only to be forced to rush through the end before Bowser messed it all up. Some may find the random nature of it a little tiresome after a while, but it adds a layer of challenge to the game as players never know when they’ll get stuck in a firestorm.

When Mario has enough shines, he can enter a supersized boss fight. Considering how powerless players are whenever Bowser rises from the sea, there’s a special pleasure in suddenly getting to turn the tables and thrash back while towering above the tiny islands. The encounters themselves are somewhat basic (Mario sure loves to ground pound bellies) and the camera often doesn’t know how to handle having two titans on screen at once, but the clashes are as goofy and entertaining as a Saturday morning cartoon.

Bang for your buck

What’s most impressive is how much players get with this package. Super Mario 3D World was already a loaded game with eight worlds and four challenging bonus worlds on top of that. Diehards can spend up to 40 hours mastering each level, collecting each stamp, and hunting down every last star. Toss in Bowser’s Fury, which contains 100 shines to collect, and the total package contains 50 hours of single-player fun.

Every little piece takes an already great Mario game and tucks it into a must-own package.

That’s not even taking the multiplayer into account. Super Mario 3D World supports up to four players, which creates the kind of chaotic 3D platforming that friends can laugh over. Bowser’s Fury includes a multiplayer component as well, with one player controlling Bowser Jr., but it’s more of a sidekick mode that’s meant to keep kids occupied while mom or dad plays.

The package even sports a new photo mode, which is a welcome touch. Any stamps players collect through the game can be used in snapshots, so there’s actually a little incentive to hunt them down.

Every little piece takes an already great Mario game and tucks it into a must-own package. Re-releases rarely ever feel essential for players who owned the original (see Super Mario 3D All-Stars, with its bare-bones ports of three Mario staples), but Super Mario 3D World + Bowser’s Fury breaks the mold by offering two delightful, content-loaded games for the price of one.

Super Mario 3D World + Bowser’s Fury is one of the best Nintendo Switch packages money can buy. The Wii U classic hasn’t aged a day and remains a delightful romp that contains some of the franchise’s most creative ideas. Meanwhile, the new Bowser’s Fury mode is a superb standalone adventure that plays like a short, but sweet Super Mario Odyssey sequel. It’s a joyful duo of games that celebrates Mario’s past, present, and future all at once.

Super Mario Odyssey is still the best Mario game available on Switch, but this package isn’t far behind.

Super Mario 3D World takes about 10 hours and Bowser’s Fury can be completed in around three, but hitting 100% completion between the two games takes its play time up to around 50 hours.

Yes. Even if you owned Super Mario 3D World on Wii U, the re-release is an essential single and multi-player game that’ll sit right alongside The Legend of Zelda: Breath of the Wild as a must-own Switch title.

Topics
Bowser attacks in The Super Mario Bros. Movie’s first trailer
You can play a fan-made Super Mario Bros. 5 in Mario Maker 2 right now
The best weapons in Splatoon 3
Splatoon 3 beginner’s guide: 6 tips and tricks to get started
Best gaming laptop deals: Save on Alienware, Asus and more
Best Alienware Deals: Save on gaming laptops, PCs and monitors
The best video games of January 2023: Hi-Fi Rush, Dead Space, and more
With Valiant Hearts: Coming Home, Netflix finds its video game voice
The best guns in Dead Space
The Crew Motorfest brings a racing festival to Hawaii this year
The best skills to inherit in Fire Emblem Engage
Dead Space: how to fix the centrifuge
How to fast travel in Forspoken