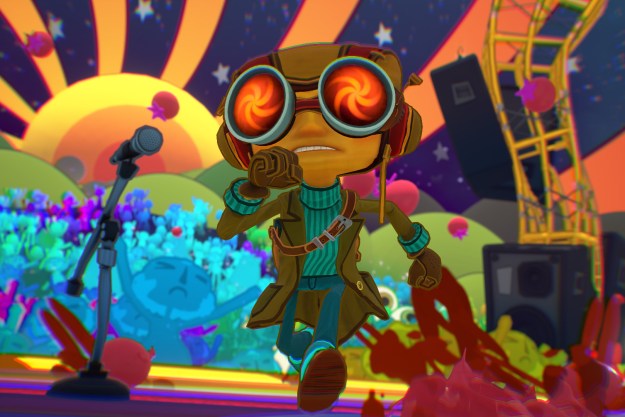 Playing Psychonauts 2 feels a lot like rediscovering a long lost memory. For those who grew up in the era of mascot-driven 3D platformers, it’s a familiar return to a time when games were all about collecting hundreds of items and Nickelodeon was king. It’s a bit of emotional time travel for those looking to reconnect with their childhood.

There’s a good reason that it feels so nostalgic: Psychonauts 2 has been in the works for a long time. The team at Double Fine began kicking sequel ideas around during the development of the first Psychonauts game, which launched way back in 2005. Several publishers reportedly turned the idea down over the years, eventally leading Double Fine to set up a successful crowdfunding campaign in 2015 to bring it to life. While games have evolved quite a bit since the PlayStation 2 era, fans just weren’t ready to let go of the past. That can be unhealthy behavior in some contexts, but it’s a positive one here.

Psychonauts 2 deftly comments on mental health topics through an inventive platformer that’s always sincere and empathetic. It can feel bloated from 16 years of creative brainstorming, but it’s hard not to be charmed by a game that acts as a cheerleader for players of all ages.

Like its predecessor, Psychonauts 2 stars Raz, a 10-year-old circus performer-turned-psychic who can jump into anyone’s mind. The sequel picks up right where Psychonauts (and VR spinoff Rhombus of Ruin) left off, opening with a thorough “previously on” segment that runs through every plot beat one may have forgotten since 2005.

It’s a helpful way to kick the adventure off, because there’s a lot to keep track of in Psychonauts 2. Raz is now an intern for a prestigious group of psychic agents — the titular Psychonauts — and he must help suss out a mole in the organization who aims to resurrect the murderous psychic Maligula. That spy movie setup is a perfect fit for the series, taking players through mind-bending levels where unreliable narrators twist the truth. It’s a kid-friendly Inception.

It’s a little funny that we get such a sweeping tale here, because Psychonauts 2 really excels when it’s telling smaller, intimate stories.

There’s a lot more happening, including a lore-filled deep dive into the political inner workings of Grulovia, a fictional country in the game. We learn a whole bunch about Raz’s family in an interlude that halts the main story’s momentum for a few hours. There’s also a whole ensemble of young interns who simply disappear for the majority of the game and reintegrate into the narrative as if they’ve been there all along.

Considering how long Double Fine has been kicking around ideas for the game, there’s a sense that perhaps too many went into the final project. It feels like three games worth of story crammed into one, because who knows how long it’ll be until part three?

It’s a little funny that we get such a sweeping tale here, because Psychonauts 2 really excels when it’s telling smaller, intimate stories. Every time Raz pops into someone’s head, we get a little self-contained arc that carries emotional depth. One level features a moving love story where Raz has to help a character overcome the mental blocks holding them back in their relationship (all visualized by Raz finding seeds to help a farmer regrow a shriveled-up garden). Those are the tales that ultimately help the game complete its true mission: To help us better understand each other’s struggles and encourage us to grow, no matter how hopeless we feel.

Those little stories come to life thanks to inventive level design that visualizes abstract concepts in creative ways. In an early sequence, Raz tries to convince his teacher Hollis to let him go on more dangerous missions by rewiring her brain. The level begins in a hospital setting, representing both Hollis’ past as a doctor and her fear of endangering her students. When Raz rewrites her thoughts, the level turns into a casino, as Hollis is suddenly willing to take high risks. A platforming section previously centered around X-rays suddenly changes as Raz is hopping on top of playing cards instead.

Each level is loaded with these types of ideas, which narratively justify each new platforming mechanic. One section sends Raz into the mind of a germaphobe who runs a bowling alley. As a result, players need to ride around on giant bowling balls, gliding over piles of green goop, and use ball polishers to activate new paths (or lanes, as it were). Another section turns performance anxiety into a cooking game show where Raz needs to chop up sentient foods and drop them on a serving dish for loudmouth judges. Even when a level doesn’t entirely nail what it’s doing, it’s always surprising and fun to see how each mind palace is constructed.

The platforming is standard for the genre, which makes all the creative visual design that much more key. Raz can grind rails, bounce on ropes, swing from branch to branch, and so on. Different PSI Powers add some extra mechanics to the mix, letting Raz freeze time or burn wooden objects, but the experience is largely unchanged from 2005. Instead, Double Fine doubles down on building more elaborate playgrounds for Raz to weave through. It’s a series of therapeutic amusement park rides (literally, in one case).

Nothing in Psychonauts 2 feels like busy work or content for the sake of content; everything is narratively motivated. Even collectibles serve a greater purpose. Like the first game, figments indicate where to go next in lieu of objective markers. Vaults can be cracked open to get a little slideshow about a character’s backstory. And, of course, players can once again track down pieces of emotional baggage, which remains the series’ best sight gag.

The game doesn’t reinvent the genre, because it doesn’t need to. It recognizes that those ideas can help tell a meaningful story, even if the collect-a-thon platformer is currently out of fashion. Just as Psychonauts 2 tells players that anyone can grow, it believes that video games can always reach new heights without abandoning their history.

The combat side of Psychonauts 2 has its own clever twists. Every enemy is some manifestation of a mental ailment. Panic attacks, for example, appear as erratic monsters that need to be slowed down to better handle them. It’s always fun to see a new condition pop up and how it’s been translated into a physical creature.

Raz can perform basic punches and evasion rolls, both of which feel a little too ineffective, but PSI Powers are what make battles more interesting. Players gain different powers through the game, which have a function both in and out of combat. Mental connections let players zip up to little thought nodes, but they can also tether to an enemy and pull them in. In many battles, I found myself taking full advantage of my toolkit rather than sticking with one basic attack loop.

Psychonauts 2 may not be perfect, but it’s always looking out for its players. Empathy isn’t just a narrative theme; it’s at the heart of the game’s design.

The abilities evolve throughout the game, which continually adds new utility to each one. Every time Raz ranks up by collecting various items, he’ll get a skill point that can unlock a handful of upgrades on each power. Players can also buy and equip pins, which augment abilities further. There’s a surprising amount of potential to each tool, giving players a good reason to engage with the “collect and rank up” loop.

Switching between powers can be a pain, though. Abilities are mapped to a controller’s triggers and bumpers, so four can be active at a time. They can be swapped and remapped on the fly via an ability wheel, but it can be tough to navigate midbattle. I’d often find that a swap didn’t take, forcing me back into the menu to try again. Ability juggling can be a little confusing as a whole, and I found myself wishing that a few powers, like a levitation ball that’s essential to navigation, would just remain permanently mapped to one button.

Those who find these battles frustrating can enable “narrative combat” and dial down enemy health. That kind of considerate design is apparent in the very first moments of the game, when a splash screen, complete with links to helpful resources, encourages players who might have a tough time with the game’s mental health themes to take a break. Psychonauts 2 may not be perfect, but it’s always looking out for its players. Empathy isn’t just a narrative theme; it’s at the heart of the game’s design.

Psychonauts 2 is a sweet platformer that just wants the best for its characters and players alike. By visualizing mental health issues through creative level design, Double Fine is able to tell a series of clever stories where gameplay and narrative go hand in hand. It has a few personal flaws in its fiddly combat and overeager story, but if Psychonauts 2 teaches us anything, it’s that we’re not defined by our problems.

It Takes Two has a similar approach to narrative-gameplay fusion, with tighter gameplay. Ratchet & Clank: Rift Apart features better combat to pair with its platforming spectacle.

Depending on how much you collect, it’ll take around 10 to 15 hours. Plenty of time can be spent grabbing every collectible and reaching max rank after the credits roll.

Yes. Psychonauts 2 is a friendly platformer for players of all ages and those who are familiar with the series. It’s also available on Xbox Game Pass, which is a big plus.