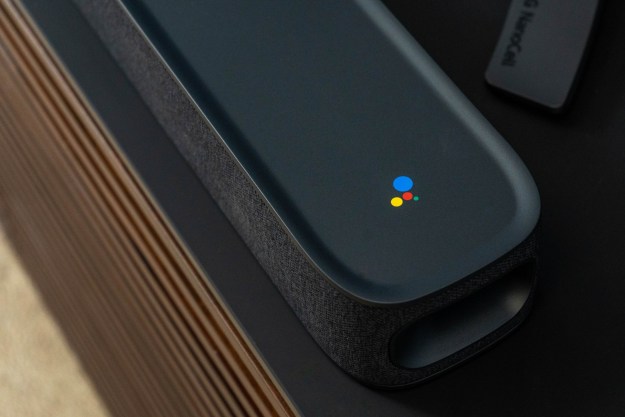 “The JBL Link Bar is a decent all-in-one soundbar with Google smarts, but it'll cost you.”

From the days of bulky disc players, DVRs, outboard video streamers, A/V receivers, and speakers, we’ve transitioned to an era where just two devices — a smart TV and a compact soundbar — can now perform the vast majority of audio or video-related tasks. In fact, we’ve gotten to the point where some of these devices are packing redundant features.

With the new Link Bar, JBL throws its hat into the smart soundbar ring, offering an Android TV and Google Assistant-based device that competes with the likes of LG and Sonos to be the technological brain at the center of your living room. But despite good intentions and surprisingly adept sound, we think the Link Bar is a bit too ambitious (and expensive) when you consider other options.

Like most contemporary soundbars, the Link Bar does well to stay out of your eye line. A simple black device with a cloth grille and rounded edges, the only pop of color you’ll find on the soundbar is a small Google assistant logo on the right-hand side.

The included remote mostly echoes the lines of the bar, a small rounded candy bar with simple controls for changing between the soundbar’s built-in apps, controlling volume, and navigating inputs and menus, as well as offering a button to call up Google Assistant rather than forcing you to shout into the electronic void.

Speaking of inputs: We’re gluttonous, and the Link Bar easily sates our appetites. On the back you’ll find three different HDMI inputs, which is more than most subwoofer-less soundbars we’ve ever seen, as well as many higher-priced options. An extra input offers HDMI ARC connection, which will allow the bar to connect its own built-in Android TV interface to your TV, and source TV sound back to the bar. There’s also digital optical, 3.5 mm, and Bluetooth connection.

As with most models, a few physical buttons grace the bar’s top section, allowing you to change volume and inputs, and to turn off the microphone if you don’t want Google listening in while you binge Netflix.

As with most modern soundbars, setup is an absolute breeze. Just plug the Link Bar into power and into your TV via the corresponding HDMI ARC input and the visual Android TV interface will walk you through a quick on-screen setup to connect to your Wi-Fi (there’s also an ethernet port on the back of the bar). Once it has internet access, the Link Bar is ready to roll.

We’ve waxed poetic about the differences between each of the major smart TV devices and interfaces for years — and talked plenty about our gripes with Android TV — so we won’t use this as a space to review the interface itself, except to say that Android TV’s latest iteration is simple, easy to use, and should serve the basic needs of most people. That said, we will note that the on-board system doesn’t support high dynamic range (HDR) content, so you’ll need an outboard streaming device to get the most out of 4K HDR TVs. That’s a bit of a shocker given that most modern TVs support at least one HDR format.

Then again, if you own a TV that was made in the last half-decade, you almost certainly already have a smart TV interface built-in, so if your TV supports HDR you can just use that to watch your favorite content.

In some ways, that makes the Link Bar’s streaming functionality feel like a solution to a problem most don’t have. There are so many convenient and affordable ways to stream video in 2019, it’s hard to swallow the Link Bar’s $400 price point.

The Link Bar’s voice control functionality essentially makes the Link Bar into a Google Assistant speaker, along with the ability to change inputs, play movies and TV shows from select streaming services (including Netflix), and do virtually everything else a standalone smart speaker would do.

That voice functionality is awesome for playing music or checking the weather, but we can also do that on the $250 Alexa-enabled Yamaha YAS-109 model, then use our smart TV or add on a Roku, Amazon, or Google streaming device for $50 or less.

You could also replicate the features of the Link Bar with a more affordable soundbar like the Vizio SB3621n-G8, then buy a Fire TV Cube to control your entire A/V ecosystem with voice commands — including the ability to change cable channels — again, for a lot less cash.

The seamlessness of the JBL Play Bar experience is nice, but it’s not particularly better than any of the above solutions, which combine to offer virtually all of the same features (plus HDR support) for significant savings.

The JBL Link Bar is easily one of the best sounding subwoofer-less soundbars we’ve spent time with (save Sennheiser’s insane Ambeo). The 40-inch Link Bar offers a bold and dynamic soundstage, bringing an enjoyable depth and nuance to the on-screen action.

When watching everything from dark dramas like the latest season of Mindhunter to action films like Die Hard, we were thoroughly impressed with the Link Bar’s ability to fill medium-sized rooms with truly cinematic sound. The same goes for music, which came through with surprising width, even when set to stereo mode. We were particularly impressed with the bar’s ability to replicate jazz, folk, and other acoustic styles — which often sound tinny or boxy on soundbar speakers.

It’s still limited by the physical space it takes up in some ways, though: The Link Bar, like many others, can tend to get a bit harsh when listening to particularly bright recordings or TV shows at high volumes, but at the kind of volumes this becomes an issue, you’re probably damaging your ears and your relationships with your family and neighbors.

Despite the above-average sound, unfortunately, the feeling that you aren’t getting the best value continues in this context. The fact is, the Link Bar is not dramatically better-sounding than the options offered by Yamaha or Vizio for hundreds of dollars less, with much of the cost of the bar appearing to be attributable to the addition of Android TV and Google Assistant.

Those features are great, but at the end of the day, we expect a $400 soundbar to significantly outperform peers when they are so much cheaper, and while this does outperform them, it doesn’t do so by much. In fact, we prefer the YAS-109 when it comes to music (somewhat important for a bar that will be used as a smart speaker too).

You can add on a JBL-made wireless subwoofer for an extra $300, but that seems like a hefty price to pay when the Yamaha YAS-209, a larger version of the YAS-109 with a subwoofer included, retails for just $350 total.

The JBL Link Bar combines a smart speaker, streaming device, and soundbar in one, but it comes at a high price.

Yes, both the Yamaha YAS-109 and YAS-209 offer built-in Alexa smarts and solid sound for less money, and even similarly priced options like the Sonos beam offer compelling extra functionality, such as the ability to choose between voice assistants and to easily integrate with other Sonos speakers as part of a multi-room system.

The Link Bar is very well made, and even the remote feels solid. We expect it’ll last a very long time.

No. You can get all the same functionality for less, and you probably don’t even need the added streaming interface that comes built into the Link Bar if you have a modern TV.

ATSC 3.0: Everything you need to know about broadcast TV’s next big thing

Sonos announces $279 Ray Soundbar and its own voice control