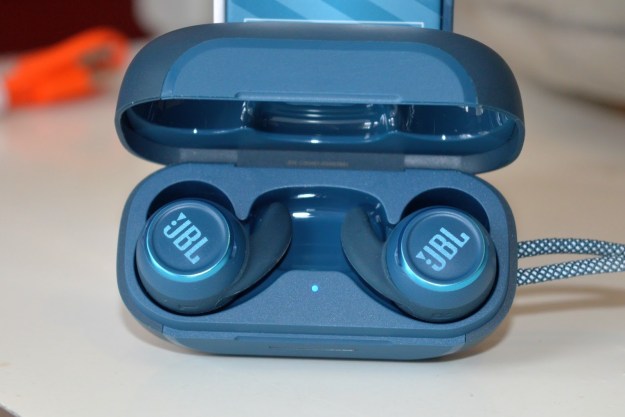 “With pounding bass and a huge list of features, the JBL Reflect Mini NC dial up any workout.”

JBL sells a lot of different true wireless earbuds aimed at fitness fiends. Between the company’s own JBL-branded products and its partnerships with Under Armor and Dwayne “The Rock” Johnson, you can pick from eight different models, ranging in price from $100 to $200. Announced at CES 2021, the newest addition to this lineup are the $150 Reflect Mini NC, JBL’s first workout buds to feature active noise cancellation (ANC).

With an impressive list of features, excellent water-resistance, and a price that’s surprisingly accessible, it makes you wonder: What’s the catch? Let’s take a look.

The Reflect Mini NC, like most JBL headphones, come packaged in a box that is beautifully designed, but a recycling nightmare, with lots of plastic, foam, and embedded magnets. Inside, you’ll find the earbuds, their charging case, a USB-C charging cable, a total of three sizes of silicone eartips and wing-tips, and paper documentation including a quick-start guide.

Most other charging cases feel flimsy by comparison.

Available in black, white, or blue, the Reflect Mini NC and their compact charging case exude ruggedness. Despite its light weight, the charging case is very solid, thanks to a tough plastic shell and a hinge that is impressively robust. The lid opens easily and stays in the open position until you flip it closed, which happens with a very satisfying magnetic snap. Most other charging cases, even JBL’s own Reflect Flow, feel flimsy by comparison. A built-in lanyard loop is handy for toting the headphones along when you have no pockets, or securing it to a gym bag or backpack.

I’m also kind of obsessed with the charging indicator on the front of the case. Most cases feature a tiny LED dot, or maybe a series of dots if you’re lucky. But on the Reflect Mini NC, you get a big, bold LED bar to indicate the charging status of each earbud and the case itself. The only thing missing here is wireless charging.

The earbuds are also solidly built, and true to their name, they’re a little smaller than the Reflect Flows — though not by a lot. As a perk for nighttime runners and walkers, the JBL logos on the touch surfaces have had reflective paint applied.

No workout buds would be complete without some kind of water resistance, and the Reflect Mini NC don’t disappoint, with an IPX7 rating that means they’re effectively waterproof. They won’t work if you go swimming with them, but they won’t be damaged by it either.

True wireless earbuds designed for workouts often use an ear-hook design to ensure a secure fit. The Powerbeats Pro are the poster child for this feature. But if you can get the same level of security without an earhook, I think that’s a plus, and the Reflect Mini NC definitely deliver. The compromise — if you consider it a compromise — is that these earbuds make your ears feel really full.

You’ll have zero concerns about an accidentally dislodged bud.

The silicone eartips and wing-tips are denser than the ones JBL uses on the Reflect Flow, presumably to improve stability, but it means they’re not quite as comfy. You’ll have zero concerns about an accidentally dislodged bud, but you’ll also never forget you’re wearing them, so they’re probably not the best choice for extended wear in an office or on an airplane.

The touch controls respond quickly, as long as you make contact with the logo’s surface and not just the edges. Each earbud comes with preset functions from the factory. The left bud lets you switch between ANC modes, or activate Talk-thru mode (more on that later). The right earbud is set to control play/pause and track skip forward/back. Both earbuds can access your phone’s built-in assistant and both let you answer/end phone calls and mute/unmute the microphones. So far, so good. There’s no volume control by default, but that’s not unusual — many true wireless earbuds lack this function.

The problem comes when you use the free JBL headphones app to customize the controls. Instead of letting you pick which functions go with which gestures, you’re forced to pick from presets. So, the left earbud can control noise canceling, for example, or playback functions, but not a mix of these functions. If volume control is important to you, you can set either earbud to control it, but then you’ll be forced to pick just one other feature to control with the other earbud. What will it be? And if you don’t like the gesture assigned to a specific function (like a single tap for switching ANC mode), you can’t change it.

You can configure the Reflect Mini NC to access Google Assistant or Amazon Alexa instead of your phone’s built-in assistant, but if you use this very cool feature, it takes over an entire earbud. This leaves you with Alexa (for example) and volume. Or Alexa, and ANC. You get the picture. I asked JBL why the controls seem to be set up like a bundle of channels on cable TV, but I never got a satisfying answer.

Like more and more earbuds these days, the Reflect Mini NC have an auto play/pause feature that halts your tunes when you remove an earbud. It’s very responsive and you can disable it within the app if you wish.

You can use the earbuds individually (both can answer/end calls) and their wireless range is excellent. Pairing is also very quick and easy for both iPhone and Android phones.

There’s a bass-forward sound signature that you can feel through your whole body.

In the JBL app, you can pick from three different Smart Audio modes that are claimed to alter the parameters of the wireless connection: Normal for the most stable connection, Audio for the best sound quality, and Video for the lowest latency (also ideal for gaming). I didn’t notice a lot of difference between these modes, but I like that they’re included if you need them.

JBL also includes a “find my earbuds” function, which causes each earbud to emit a high-pitched beeping sound. It’s loud enough that you’ll hear it even if a bud becomes wedged between sofa cushions.

When it comes to a set of workout earbuds, big, bold bass is arguably one the most important elements. After all, it’s the beat that keeps most of us going, whether we’re out for a serious walk or trying to set a new personal best at the gym. Thanks in part to their super-tight seal, the Reflect Mini NC nail this requirement, with a bass-forward sound signature that you can feel through your whole body.

Spin up Post Malone’s Wow. or Ariana Grande’s 7 rings and wait for those ultra-low bass notes to hit — it’s powerful stuff. That same low-end rumble is perfect for action movies, too.

You can tweak EQ to your heart’s content inside the JBL app, with a few presets but also your own collection of custom settings. These are worth exploring — you can drastically change the Reflect Mini NC’s signature.

They’re not the most nuanced set of earbuds I’ve ever heard. The midranges can get a little overpowered by the strong lows and highs,and their soundstage isn’t as wide or as open as you’ll get on models like the Jabra Elite Active 75t. Still, as a workout companion, they couldn’t be more on point soundwise.

After a lukewarm experience with JBL’s ANC technology on its Club One wireless headphones, I was prepared for an underwhelming performance from the Reflect Mini NC as well. Surprisingly, the opposite was true. Once again, their tight ear-canal seal is the key: These earbuds do such a good job of passive noise isolation that the ANC circuitry doesn’t have a lot left to cancel, and it does a very effective job.

It’s so good, in fact, that even without music playing, family members were able to sneak up on me totally undetected while I had the earbuds in.

You can dial in the specific set of frequencies you want to cancel using a slider adjustment within the JBL app — it’s not quite as convenient as the presets you’ll find from Sony, Jabra, or Soundcore, but it’s still very handy for fine-tuning ANC performance to your specific environment.

JBL claims six hours of use between charges for the Reflect Mini NC when ANC is turned on, and seven hours when it’s off. That’s similar to what you’ll find in the Jabra Elite 75t and Elite Active 75t, but not quite as impressive as the Powerbeats Pro’s nine hours. The charging case holds two full recharges, adding another 12 or 14 hours. From what I can tell, these numbers are pretty accurate.

A 10-minute quick charge nabs you an extra hour of playback time, though this is at the very low end for true wireless earbuds.

Once again, JBL has managed to surprise me — the Reflect Mini NC have excellent call quality. To put it in perspective, when using them outside, near traffic, you simply couldn’t tell that I wasn’t indoors. There was an occasional wobble as the noise suppression dealt with car and wind sounds, but overall, these earbuds are impressively clear.

While on a call, you can still switch the ANC to Ambient mode, which is perfect for hearing your own voice without the muffling effects of the earbuds.

Boasting massive bass, the JBL Reflect Mini NC are also well-priced and feature-heavy, making them an ideal set of workout companions. If JBL could fix the awkward and limiting control schemes, they’d be just about perfect.

I think JBL has nailed the sweet spot for workout earbuds with the Reflect Mini NC’s price, sound, and features, but here are three alternatives worth considering:

Sony’s $200 WF-SP800N are some of our favorite workout earbuds and they offer better sound quality and better ANC, plus a massive nine-hour battery life.

The $200 Jabra Elite Active 75t offer better sound quality (though not as much bass) and controls, as well as longer battery life, while still offering excellent water and dust protection. I think they’re more comfortable too, but without ear hooks or wing-tips, they aren’t as secure.

The $150 JLab Epic Air Sport are one of our favorite Powerbeats Pro competitors. They don’t have ANC, and their earhook design makes them less versatile, but they have great sound and enormous battery life.

Backed with a one-year warranty from JBL, the Reflect Mini NC are very ruggedly built and I expect them to last a long time. The silicone eartips and wing-tips will probably need to be replaced after a year of continuous use, but that’s normal for these parts.

Absolutely. As long as you’re OK with a very snug-fitting in-ear design and don’t mind spending some time figuring out which controls you want to use, the JBL Reflect Mini NC are awesome workout earbuds.