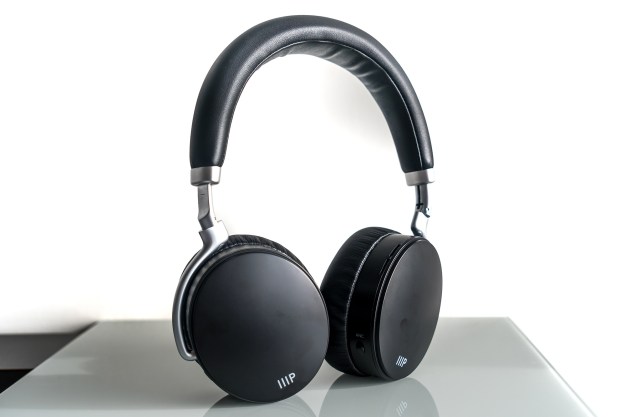 “The Monoprice Sync-ANC are wallet-friendly and comfy, but these cans don't impress on ANC.”

A good pair of noise-canceling headphones can cost you, but they don’t have to cost you a lot. Bargains are out there if you’re really looking to stretch out your dollar these days, and that’s exactly where the Monoprice Sync-ANC fit in. At an affordable $60, and with a decent slate of features, they offer an intriguing mix as an alternative to more expensive pairs.

Cheaper headphones don’t have to look or feel cheap, as evidenced by the thought Monoprice put into crafting the Sync-ANC. The soft protein leather on the earcups and headband is quite comfortable, helping me wear these cans for longer periods, while the extensions are pretty smooth when setting them up to fit right. There are even markings along the metal bands to indicate how far you need to go to get back to your preferred size.

That matters when folding the headphones up. You don’t get a case to put them in, and folding them can feel awkward because you can either twist the cups to lay flat or push them inward. Whichever way you go, the two sides will bump into each other, so there’s no elegant way to do it, though being able to fold a pair of cans at this price is already a win in my books.

Look closer at each side and various controls and ports stand out. On the left, you have the active noise cancelation (ANC) switch and 3.5mm port. On the right, there’s the power switch, plus buttons for play/pause and volume, as well as a Micro USB port for charging. That’s right — Micro USB — a port that’s become almost like a sighting now that USB-C is the clear industry standard. Monoprice includes a Micro USB charging cable and 3.5mm Aux cable in the box, and if you’re taking these with you on the road for any extended period, you’ll need that charging cable to come with you because the battery life will force the issue.

It’s not uncommon to see separate controls to power headphones on and turn ANC on or off, but it’s not as common for ANC to work independently of the headphones’ own power. That lets you block out background sounds without listening to any audio or using Bluetooth, and the feature works with wired connections when you plug in via the 3.5mm Aux port. You’ll know when it’s active via the green LED on the left earcup.

While Monoprice is obviously trying to offer some balance in how and when to use ANC, its performance leads to what I can only assume are unintended consequences. Switching ANC on alters the soundstage considerably by thickening bass at the expense of highs and mids. Don’t get me wrong, it’s not what you would call a true “bass boost” mode, as no such thing exists on the Sync-ANC, but it’s as close as you’ll get to one. What’s weird about this is that in most headphones these days, turning ANC on is supposed to make audio sound better, only it’s clearly the opposite here. You may not care as much if you prefer the bass-heavy curve the feature enables here, but I found it to be a detriment for sone genres, like jazz or rock.

With no app to customize or remedy anything, what you hear is what you get. It immediately made me look over to the Anker Soundcore Life Q30, a pair of $80 over-ears that not only offer better passive noise isolation, but also work with the Soundcore app to offer an EQ and other custom features. Also, when you use ANC on those headphones, the sound doesn’t fall off in any way, maintaining consistency throughout. And even though the Q30’s noise cancellation isn’t exceptional, it’s better than what Monoprice delivers here by a greater margin relative to their price difference.

The issue is that the Sync-ANC only target low-frequency sounds, doing far less to muffle voices or higher-frequency sounds. Even within those limited parameters, results aren’t all that impressive. I had measured expectations going in, given these are $60 cans with ANC support, but when you market a feature this much (and include it in the product’s name), expectations naturally grow because of it.

It’s a shame because the Sync-ANC actually sound pretty good, including those rare times I plugged in via Aux. The default soundstage (with ANC off) is punchy and fairly well-balanced. They don’t push bass to ridiculous levels, nor reduce highs and mids too much. Passive isolation is better than you might expect, even if it’s not as good as it is on the aforementioned Soundcore Life Q30, helping sound resonate further. I also came away impressed at the lack of distortion at higher volumes. At 60% to 70%, the Sync-ANC are quite loud, and while I don’t recommend blasting music above 70% for the sake of long-term hearing health, you can put these on with confidence that they’ll be able to belt out your favorite tracks.

I also like the support for aptX and aptX Low Latency, along with AAC and SBC, and came away away pleasantly surprised at how good they were when I played video games via Xbox Game Pass on one of my Android phones. You could also do the same with the right USB dongle to connect to on a Windows PC or game console. Bluetooth range also proved to be reliable, as I could walk around my home and not deal with crackling or cutouts. Plus, the Sync-ANC support multipoint pairing to connect to two devices simultaneously. The user manual explains how to do this, as it does take several steps to make it happen that include turning the power on and off for the headphones to put them back in pairing mode for the second device. Once done, it’s a pretty seamless transition, like listening to music on your computer while then taking a call on your phone.

Speaking of calls, these headphones do an adequate job of keeping conversations clear, though your background will matter. In quieter settings, you won’t have any problems. Callers never complained about how I sounded when talking to them unless I was in a busier or louder environment. And by “louder,” I’m referring to the TV being on in the same room. The onboard microphones don’t necessarily distinguish between your voice and noises around you, making it more challenging to carry on chatting when there’s activity going around you.

I like physical button controls for their general efficacy, and they work fairly well here. The play/pause button is also considered a “multifunction button” which is to say that it handles various tasks related to calls and other features. Hold it for one second to raise your phone’s voice assistant (you’ll hear an audible tone when done right) or reject an incoming call. Press it normally to answer an incoming call, and in a nice touch, you can mute yourself by double-pressing the button during a call.

With all of that going on, the Sync-ANC do largely meet their rated 20-hour battery life — if you leave ANC off. It will cut in half with higher volumes and ANC constantly on. While hardly amazing by today’s standards, especially when considering that the Soundcore Life Q30 easily hit 40 hours and the 1More SonoFlow can flirt with 50 hours per charge, they’re not surprising figures. Both of those cans are more expensive — the SonoFlow even more so at $100 — but they also give you a lot for the extra cash, like dedicated apps, EQs, LDAC support (for the SonoFlow), and an easy way to upgrade the firmware for either pair to enable fixes and additional features. Not to mention they will both sound better with ANC on.

A sound product with compromises

The Sync-ANC stand out not for the “ANC” in their name, but more for the audio quality you get when leaving that feature off. Cutting corners is standard when talking about any $60 pair of cans, which is why there are physical buttons and a Micro USB port, yet no wear sensors, nor a seemingly “right” way to fold them up, among other things. Cheap and cheerful is a good way to put these headphones in context. They have no IP protection, so working out with them would probably be an ill-advised move, yet they don’t feel as cheap as they cost when holding or wearing them.

What you’re ultimately left with is a pair of cheaper over-ears that don’t offer as much as others that will cost you a little extra. No real surprise there, but if your budget is super tight, you have to go in knowing that you won’t be getting good ANC or exceptionally long battery life. You will get good sound, though, and that might make the $60 price tag worth it when that’s the most important point of all.