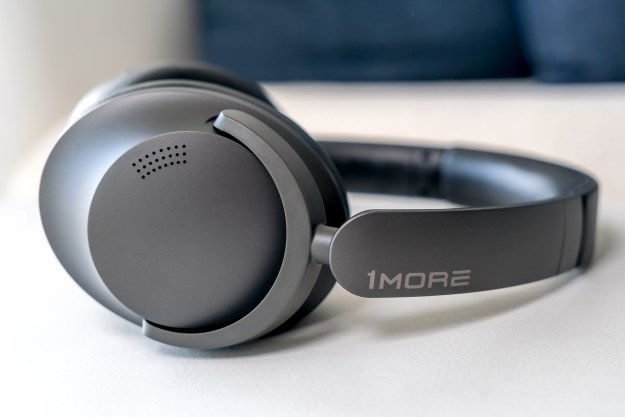 “With hi-res audio and astonishing battery life, the 1More SonoFlow are the best bet at $100.”

Do you have to spend a lot to get really good sound in a pair of noise-canceling wireless headphones? No, you don’t, and 1More proves it with its latest pair, the SonoFlow. For $100 — or less — you get a fair bit to work with for every dollar you spend on them.

That includes support for hi-res audio, plus battery life that crushes much of the competition. You can’t have it all for $100, but all told, 1More makes an intriguing case for spending less to feel like you’re getting more.

I always like it when more affordable over-ear headphones come with a nice protective case, and this one is well-thought-out, and that includes the stumps inside to line up the right and left earcups. There is a USB-C charging cable, along with a 2.5mm-to-3.5mm audio cable for wired playback, and a user guide to get things started out of the box.

The SonoFlow aren’t about unique design treatments, though I liked a couple of the choices made here. One is the red color on the inner earcups — the only real color or flair coming from these cans. The other is how well they fold and fit in the case. It seems so simple, and yet putting corresponding letters in the case take all the guesswork out of how to lay the headphones inside. I would like to see more manufacturers consider doing that when there are stumps inside to anchor the headphones in place.

The headband and earcups are soft enough to allow for longer listening sessions.

Apart from that, much of what’s here is fine. Not just the neutral color and styling, but also the lightweight materials and button placement. The headband and earcups are soft enough to allow for longer listening sessions. The cups are standard as far as sizing goes, but I doubt you’ll feel they clamp hard or place any undue pressure on your ears or head. That’s how it was for me at least.

I can’t tell you for sure if these would stand up to runs or workouts because 1More says nothing about their durability. There is no IP protection, or at least nothing official I can tell you about, so my inclination under such circumstances is to err on the side of caution and steer clear of sweating all over headphones like these. Don’t get me wrong, you’ll be comfortable wearing them, but it’s just hard to tell what kind of punishment they can take.

The SonoFlow pair fairly quickly, though without Fast Pair on Android or anything similar on iOS, you just have to go through the Bluetooth menu on your device instead. All the physical buttons are on the right side, with the power button facing forward, while the noise cancelation and volume buttons line up at the back. It’s also where the 2.5mm headphone jack sits. Only the USB-C charging port is on the left side.

The 1More mobile app is a critical piece of the puzzle because it not only offers a quick-start guide and FAQ section, but is also the means with which to update the firmware and access all of the sound features. The SonoFlow have active noise cancellation (ANC) and passthrough (transparency) modes, as well as a wide assortment of EQ presets for tweaking the sound.

Dig deeper and under Experimental Features you’ll find multipoint as the only current option, letting you connect to two devices simultaneously. There are no ways to customize the onboard controls, though the buttons do serve additional purposes. Hold volume up to repeat a track or volume down to skip one. The power button doubles as the play/pause and answer/hang-up button. Double-click it and your phone’s voice assistant chimes in. Press the noise cancellation button to cycle through ANC, passthrough, and off.

Ergonomically, I didn’t find the buttons too hard to deal with after a while, but I could see it being challenging if you’re used to different configurations on other headphones. For instance, if you prefer to have controls, touch-sensitive or otherwise, on the outer earcup, then muscle memory might take longer to kick in.

Notably absent are wear sensors to automatically play/pause music when putting on/removing the headphones. They keep playing when you take them off, which is a bit annoying when you’re used to sensors doing that for you.

The team at 1More plays up the support for Sony’s LDAC hi-res codec as a differentiator, and given the price, it’s not wrong to point it out. But that’s assuming you have a device that supports the codec, and that the audio content you’re listening to offers a bit rate high enough to be considered hi-res. While the SBC and AAC codecs are in the mix here, aptX Adaptive isn’t, omitting a codec that really serves Android devices well because it includes low latency, which is great for gaming and video playback.

As always, iPhone users can’t take advantage of LDAC, but iOS devices do a much better job with AAC than Android, so perhaps that’s an acceptable trade-off. You get 12 EQ presets, yet no way to adjust or tune them. I expect that to change with a firmware update at a later date because 1More has done it before, releasing an update that enables custom EQ presets. I would think that’s an inevitability for the SonoFlow.

You may not be able to perfectly dial in the EQ to your tastes, but the SonoFlow’s 40mm drivers deliver quite a punch. Indeed, the SonoFlow sound very competitive compared to the $150 Anker Soundcore Space Q45 or $130 Sennheiser HD 450BT. The default EQ preset has a nice clarity to it. It doesn’t swing the lows too far and gives some space for the mids to come through. Playing around with the presets while switching from one genre to another, the sound stays consistently good, providing a nice balance that could easily rival headphones costing more.

I never got the impression I was listening to headphones that just use crowd-pleasing tuning and leave it there.

I also came away impressed with playback, both in hi-res and with ANC on. Even when turned off, it was good. I never got the impression I was listening to headphones that just use crowd-pleasing tuning and leave it there. These are more balanced than that, and I would suggest that’s true for most of the presets. To my ears, LDAC does make a difference over AAC, though only when the available content can provide more nuance to listen for. For instance, when listening to songs on Amazon Music HD, LDAC let me hear more detail, while tracks from Spotify didn’t seem to benefit much at all.

The onboard mics play their role in clearing up phone calls as well. Unless I was in a loud or crowded environment with sustained noise, callers never complained about how I came through audibly. Bluetooth Multipoint serves a good purpose here, too, especially when it comes to listening to tunes on one device while taking a call on another. It’s not quite as seamless as other headphones or earbuds that do itm though. For instance, when calls came in, I would accept the call and there would be a noticeable delay when switching between devices.

Plugging in the audio cable to go wired disables the other features and silences the app, so while convenient, it doesn’t give you access to other features the way the Treblab Z7 Pro do, for instance. Those cans let you go wired and also tap into noise cancellation.

ANC performs admirably at flushing out much of the low-frequency noises you come across. It won’t match what the likes of the Sony WH-1000XM4 or XM5 can stamp out, but for a fraction of the price, the SonoFlow come closer than you’d expect. High-pitched sounds will squeak through, but even then, not in a way that’s grating or frustrating. More importantly, they do a good job of drowning out voices and noise around the house.

When it comes to wanting to listen to ambient sounds, passthrough is good at making that work. The folks at 1More talk up the microphones inside the SonoFlow, and they do a fine job piping in the background. I had no problem having a quick conversation or hearing vehicle traffic while walking down the street with these on.

Here’s where the SonoFlow truly impress. At up to 50 hours of battery life with ANC on (70 if you leave it off), you could literally listen to them for days and not have to charge them back up. Volume levels will determine the real number, but I easily reached a cumulative 48 hours at 60% volume. That’s really good by any measure for any pair of over-ears.

A quick five-minute charge is enough to deliver five hours of playback, which is mostly true if you stick to reasonable volume levels. In a pinch, that’s a lifesaver and long enough to cover most flights, too.

The longevity, at least when referring to battery life, is a big part of the value proposition in making the SonoFlow a good buy at $100. They will probably cost less along the way, given the company’s penchant for sales and routine price drops. Considering how good they sound, how comfortable they feel, and how long they last, it feels like you’re getting more than your money’s worth.

Assuming 1More takes its usual approach and updates the app to add extra features and customizations for the SonoFlow, which only builds on what is a really good foundation here.