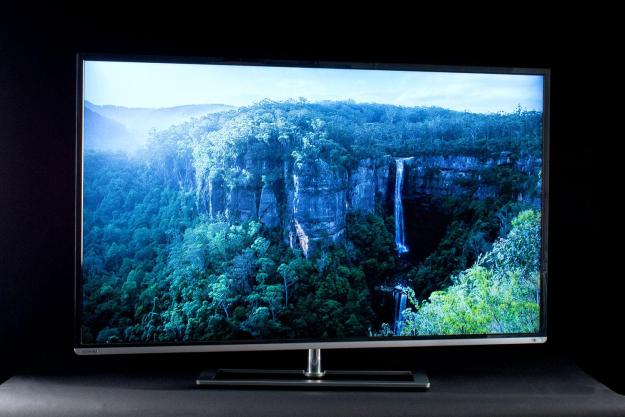 “The L7300U is a bit of an enigma in that it offers terrific picture quality and an attractive design, but a dismal smart TV experience and sluggish response times.”

Toshiba L7300U series information: This review is based on our hands-on experience with the 50-inch 50L7300U TV. However, our observations also apply to the 58-inch 58L7300U and the 65-inch 65L7300U. According to Toshiba, the three sets differ only in dimension and weight and offer identical features and performance.

By steering clear of gesture control, voice control, motion remotes and other frilly features, Toshiba can offer the picture quality expected from a premium set at the fraction of the price its competitors charge. It’s just the kind of approach purists like to see. All we needed to know was whether Toshiba was able to make some refinements to its flagship’s picture quality, or if it took a step backward.Last year, we praised Toshiba’s L7200U for delivering premium picture quality at a steal of a price point, so when the L7300U was offered for review, we gladly accepted. This year, Toshiba’s flagship LED TV continues Toshiba’s no-nonsense approach by keeping things simple and ditching 3D capability in favor of a slightly updated smart TV interface.

We were able to lift the 50-inch L7300U model we received from its box on our own, though we don’t recommend the practice. No sense in taking the risk of dropping a brand new TV, right? But the fact that we were able to speaks to the TV’s manageable weight and overall size. Again, Toshiba has produced an attractive television with a thin bezel and an updated stand. While the stand is plastic (most are these days) it is super stable, and we appreciate the fact that it offers a wide range of swivel as well.

In the box with the TV we found a predictably large backlit remote control with batteries, an IR blaster cable, and, most notably, a wireless QWERTY keyboard with hybrid trackpad/number pad.

The L7300U is part of Toshiba’s “Cloud TV” offering, which is meant to deliver an enhanced smart TV experience. Aside from access to a limited number of apps (Netflix, Hulu, Vudu, Pandora and Skype are the most notable) this set promises access to a family calendar, photo album, media guide, streaming news and personal messaging. There’s also a fully-functional Web browser built in, which is where that aforementioned keyboard comes in.

Wi-Fi is standard, along with Wi-Di, a wireless display method that hasn’t really taken off on either the computing side or the television side. Toshiba has lots of proprietary names for its image processing features, but the important thing to note here is that it offers most of the refinements you’d expect from a premium TV, like dynamic gamma, edge enhancement and dynamic contrast. A notable addition for gamers is a gaming mode, which is meant to reduce input lag. We were not able to benchmark the lag, but we found it to be virtually unnoticeable during our game sessions.

The L7300U offers better black levels and exhibits less edge-light bleed than we recall the L7200U exhibiting. The effect was a picture that had more pop, and richer color. We don’t feel like shadow detail was particularly good, though, and that’s likely due to a lack of backlight dimming technology in the set. Thanks to its solid blacks and bright backlight, the L7300’s contrast was above average. We also appreciated that Toshiba reigned in the color enough that we didn’t have to make drastic adjustments to the color settings. In fact, we didn’t have to make many adjustments to the TV’s cinema preset to get performance that we think most viewers will be very pleased with.

While the L7300U can’t offer the kind of super-deep blacks, shadow detail or color accuracy that better plasmas can, it offers a high level of brightness and an anti-reflective screen that daylight TV watchers will prefer. We also found that, as LED/LCD TVs go, the L7300U offered decent motion resolution without the blurring that is commonly found in lower-tier televisions. To be sure, the L7300U is no videophile’s TV, but the vast majority of viewers would be thrilled with its picture quality.

Here is where the L7300U falls flat. Bluntly stated, the L7300U’s smart interface is light on apps, agonizingly sluggish, and full of stuff nobody will ever use.

The L7300U’s smart interface is light on apps, agonizingly sluggish, and full of stuff nobody will ever use.

It’s browser seems promising, but the experience is frustrating enough that we gave up on it entirely after about 15 minutes of trying. It’s too bad, too, because the browser is the only app that works with the included wireless keyboard; you can’t use it to enter usernames or passwords through other apps, sadly.

That may seem like a damning evaluation, but it isn’t. Actually, if you just pretend the smart TV interface isn’t there and tack on a Roku box or Apple TV for smart TV functionality, you still have a serious bargain on your hands.

This TV is plagued with a couple of slow transitions that potential buyers should be prepared to accept. For one, the television takes about 17 seconds to display an image once the power button is pressed. And it takes a few more beyond that before any of the smart TV functionality is accessible. Also, expect a bit of wait time between backing out of Netflix (or other apps) and returning to watching live TV.

The L7300U is a bit of an enigma in that it offers terrific picture quality and an attractive design, but a dismal smart TV experience and sluggish response times. However, if you take the smart TV functionality out of the equation, and you don’t mind the long start-up time, you will be rewarded with a terrific-looking TV that can be had for a song. While the L7300U’s quirkiness prevents us from bestowing a high rating on the television, we still recommend it for the value its price-to-picture-performance ratio represents.

Topics
Best 65-inch TV deals: Save on QLED and OLED for Super Bowl
The best wireless earbuds for 2023
McIntosh’s new $8,000 AVR: gigantic power, with a Dolby Atmos catch
Sony’s 2023 AV receivers are Sonos-ready and work with wireless speakers
The best anime on Netflix right now
Best new movies to stream on Netflix, Hulu, Prime Video, HBO, and more
The best Google TVs of 2023: from Sony, Hisense, and TCL
Best TV antennas of 2023 for local news, sports, and more
It’s still not cheap, but Samsung’s 120-inch 4K projector is $500 off today
The best kids movies on Disney+ right now
One of our favorite 65-inch OLED TVs is $400 off right now
Best Headphone Deals: Sony WH-1000XM5, Bose QuietComfort 45
You’ll be surprised how affordable this 75-inch QLED TV is