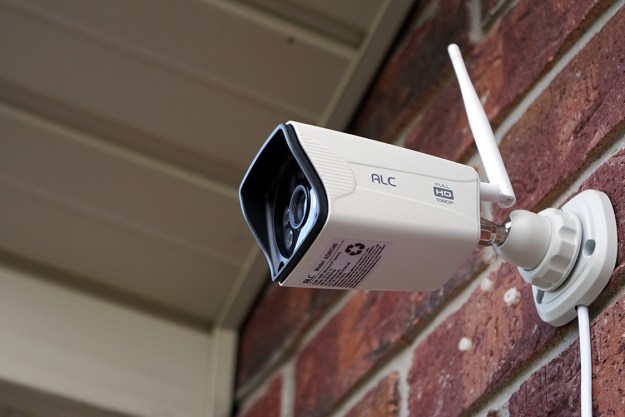 “A good step up from single-camera systems, but there’s plenty of room for improvement.”

While the majority of modern smart home surveillance systems rely on remote cloud services for video recording and playback, some users prefer their clips to be stored closer to home. The cloud is certainly convenient, but usually incurs annual subscription charges and the potential risk of service outages that can leave your video footage unavailable.

If you’re the kind of smart home admin that likes to keep their video as secure as the rest of their possessions, a network video recorder is the way to go. The $549 ALC Patrol HD Surveillance System is an attractively priced security bundle, combining four weatherproof 1080p HD cameras with a standalone 1 TB wireless network video recorder. We found it to be a good-value, functional package, but if you’re looking to step up to this multi-camera smart home security package, there a few compromises to be aware of before making the leap.

With streams available from a monitor plugged into the NVR or to smartphones and tablets via a free mobile app, Patrol HD seeks to deliver a versatile blend of traditional and modern surveillance. In terms of aesthetics and ease of installation, this system is decidedly old-school.

Forget the curvy form factors and battery-powered simplicity of the likes of Arlo Ultra — the four 1080p cameras included in box feel well-built, but are ungainly in design. The camera hardware is reasonably compact, but six frosted IR sensors and exposed screws on the front face of the camera provide an industrial air. Connect the included external antenna and it’s clear that Patrol HD is far from the prettiest smart home surveillance solution we’ve reviewed this year.

Installation also offers more challenges than some systems, so have your drill at the ready. Fixed power and data cables running from the rear of each device should be pinned to the wall for a neat finish. Unless you can protect the power adapters from the elements, you’ll also need to punch through your external walls to run those cables inside the home.

As usual, wall mounts, screws and anchors are included in the box, but as a wired system, the installation of Patrol HD will take longer to plan and complete than a simpler, sleeker wireless system like Arlo.

The Patrol HD is far from the prettiest smart home surveillance solution we’ve reviewed this year.

The 1TB network video recorder (expandable to 4TB) is a basic set-top box, resembling that which decodes your cable TV. An innocuous front panel offers single power and hard drive status indicators, while around the back, you’ll find VGA and HDMI video out connectors, twin USB, and an Ethernet port. The latter requires connecting to your router if you need remote access, but for ease, the NVR can access cameras feeds wirelessly and directly, with twin fixed antennas at the rear detracting from the simple, sleek design.

Unlike most smart home surveillance systems, which are configured via your smartphone, you must first hook up the Patrol HD NVR to a monitor (or TV) and connect the cheap USB mouse supplied in box. Initial setup is performed directly on the NVR.

Once the NVR booted up, we were pleased to see the cameras automatically connect to a private, direct wireless network. Output can be monitored almost immediately from the NVR without the need for configuration. It’s practically plug and play. Wireless signal strength from the cameras to the NVR was strong — even through brickwork, with no interruptions. From a simple start, however, life with Patrol HD quickly became complex.

Compared to the simplicity of the latest smart home surveillance apps, ALC’s NVR software feels like a swamp. The split-screen camera view is clear and tabbed presentation of settings is logical enough, but you’re left to wade through each menu to find and configure even basic options like screen resolution, hard drive formatting, and so on.

That’s not to say that ALC’s NVR software is short on features -– but they could certainly be easier to work with. Inconsistent grammar and unhealthy use of technical jargon throughout the user interface will leave many newcomers scratching their heads. (Would you prefer the N1 or ONVIF protocol for “Video Manage”?) Even seasoned security and network enthusiasts should reserve a few hours to get to grips with the swathe of settings available.

Invest some time though and you’ll find the system is highly configurable. Recordings — per camera, or for all — can be scheduled or triggered by motion, while a timeline view allows reasonably easy navigation and local playback. If you spot an event you wish to export, you can copy it to a connected USB drive. Elsewhere, you’ll find tweaks for camera imaging and advanced network settings that all but the most hardcore home admins will wish to delve into.

Compared to the simplicity of the latest smart home surveillance apps, ALC’s NVR software feels like a swamp.

We can say that once we figured out how to operate the NVR, it performed well and the ability to simultaneously monitor and record four 1080p HD video streams is a real bonus – particularly given Patrol HD’s price point. But the lack of a detailed manual or an on-screen guided walkthrough of the available settings is a miss.

We hoped the Patrol HD smartphone app, neatly linked from the NVR user interface via a QR code would provide a simpler way to manage surveillance. To a degree, that’s certainly the case but we found the app to be poorly localized, again with dodgy English grammar and exotic feature translations like “hard decode” and the engaging, if mysterious, “shake and shake” toggle. Elsewhere, the app offered features like push to talk for two-way chat — a curious choice for cameras that have neither microphone or speaker.

Cheap laughs aside, while manufacturers could get away with cutting corners on user experience a decade ago, in 2019’s highly competitive smart home market it’s simply not good enough — even on a budget system. We’d encourage ALC to invest the time in overhauling both the NVR interface and app design to compete more effectively with leading smart home brands.

High quality day/night imaging, but a lack of audio is a letdown

Thankfully, Patrol HD’s camera image quality is very good. We found the 90-degree field of view to be narrow and output somewhat darker than we would like, but imaging was sharp and clear with good color rendition. As mentioned, output can be tweaked from the NVR interface (but not the smartphone app), so if the cameras are positioned in shadow, you can easily enhance the output. The system’s night vision feature was similarly impressive, boasting well-illuminated images at long range.

As mentioned, while benefitting from motion detection, the Patrol HD camera lacks some of the more common features you will find on most competitors. Notably, there’s no integrated microphone or speaker, so sound detection and two-way chat are not available. If you’re seeking advanced features like facial recognition, automatic zoom and tracking, or even integration with smart home assistants from Amazon and Google, this isn’t the system for you.

The ALC Patrol HD Surveillance System is supported by a one-year limited warranty.

Delivering a four-camera 1080p HD surveillance system with a stand-alone 1TB NVR, at a low price of $549 is a remarkable feat. But it’s one that comes with compromise. From a hardware perspective, Patrol HD’s cameras aren’t the sexiest you’ll find on the market and are trickier to install than wireless systems. They also lack audio support but, importantly, they deliver great images.

ALC’s NVR software and, more importantly, their smartphone app certainly need work on design and user experience. Both are functional and offer a rich suite of configurable features, but a lack of documentation and translation issues mean they’re more complex to use than competing systems. As such, we can give Patrol HD a guarded recommendation. There’s a lot to like, but there are certainly some elements that need work.

ALC isn’t as well-known for leading smart home brands, so its service and support track record is unknown. We were impressed by the sturdiness of the camera hardware, but the poorly translated smartphone app dented our confidence when it comes to quality. Fingers crossed, that will be addressed in time but for now, the jury’s out.

No. The Patrol HD is not a bad value, but it has plenty of room for improvement.