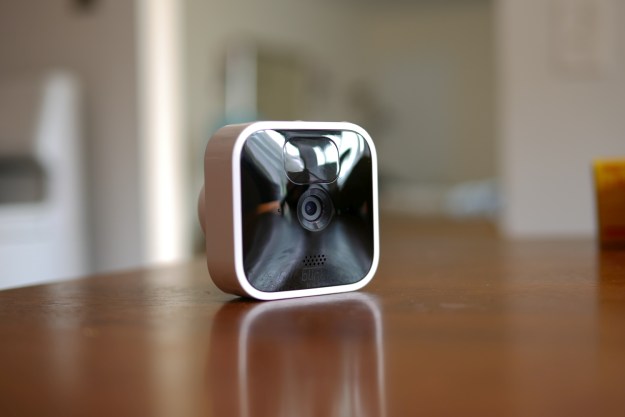 “Despite its name, the Blink Indoor just doesn't cut it to handle the inside of the home.”

Earlier this year, security camera maker Blink released the Blink Mini to expand its portfolio. It’s certainly a step in a new direction, since it was the first indoor camera from the company after the success of its line of Blink XT outdoor cameras.

Now we’re getting yet another indoor camera, aptly named the Blink Indoor, which looks a lot like its sibling – the Blink Outdoor. Compared to the Mini, the Blink Indoor boasts a higher $80 price tag, and is billed as a wireless solution. Are you willing to pay the premium when the Blink Mini sells for $35?

Place the Blink Indoor and Blink Outdoor cameras next to one another, and it’s tough to distinguish them apart from one another. From their squarish plastic design, to how they’re powered by two AA lithium batteries, they share many similarities. The only difference, though, is how the rear cover of the Blink Indoor doesn’t have the same weather-resistant covering. And, oh yeah, the Indoor is available in white, while the Outdoor is in black. You could use the Blink Outdoor camera indoors if you wanted, but you can’t use the Indoor outside, since it’s not weather-resistant.

On the specs side, it’s exactly like the Blink Outdoor, which in itself is similar to the previous Blink XT2 cam. It features 1080p video capture, up to 30 frames-per-second capture, infrared night vision, and the same 110-degree field of view. The narrow field of view is still limiting compared to the Ring Indoor Cam’s 140-degree range for example, but if you intend on monitoring entryways in the home, it suffices by capturing the important stuff.

Given that it shares the same specs at the Blink Outdoor, its performance is no different. The 1080p video it produces is passable, with enough clarity to make out scenes, but fine details are tough to discern. It suffers with its dynamic range, often blowing out the highlights. Night vision holds up with its range of about 25 feet, but it tends to be on the softer side.

Due to its battery power, the Blink Indoor has a fairly short live view when accessing the camera directly from the app – and that’s a problem. When you access the live view, you’re given a smidgen over 30 seconds before the connection cuts. I thought there would be an option to adjust it, but there isn’t one. Once it nears that 30 second mark, a button pops up on-screen asking if you want to continue. Sure, you could press it after each 30-second mark, but that’s a pain.

Interestingly enough, you can actually hardwire the Blink Indoor to a power source, since there’s an exposed microUSB port on the back. Even with the constant power supply, though, the live view is still limited to about 30 seconds. Besides that, there are controls for its motion detection sensitivity, as well as the ability to set up motion zones to reduce false alerts. Speaking of that, it lacks the advanced detection of its peers, like person or pet detection, that help to reduce false alerts.

Less of an indoor camera

As I’ve mentioned earlier, the Blink Mini was released earlier this year as the company’s first indoor camera solution. The Blink Indoor, though, acts more like an outdoor camera than an indoor one, especially when it includes the same wall mount found with the Blink Outdoor. Due to that, you won’t be able to articulate it for different vantage points if you decide to place it on a table or countertop.

Let’s talk about battery life. It’s neat the battery can last up to two years, but the app does a terrible job indicating its remaining battery life. Instead of a percentage or bar, it only gives a vague “OK” in the app after nearly a week’s worth of use. Of course, battery life will be impacted mostly by how frequently it’s triggered. There is an option to wire it to a power source, but it’s aggravating that no wire is offered in the box.

There’s only a $20 difference between the Blink Outdoor and Indoor, with the main difference being the weather-resistant construction of the former. With its $80 price, the Blink Indoor makes for a hard sell given the limitations of streaming video in real time and how it lacks the advanced features of its contemporaries.

The all-plastic construction makes it lightweight, but it still feels solidly constructed to withstand minor drops. If there’s a defect, you’ll have a 1-year limited warranty to cover it.

While its video quality is no different, the cheaper Blink Mini is a better buy given its $35 cost. You’re certainly saving the money, while also not having to worry about any live-streaming limitations.

Alternatively, the Eufy Indoor Cam 2K Pan and Tilt is an excellent offering. With tons of features including 360-degree coverage. The Ring Indoor Cam is also a solid choice at $60. It offers person detection to reduce false alerts, as well as integration with the Ring ecosystem.

No. It lacks the necessities to make it a viable indoor camera, and it’s more expensive than much more capable peers.