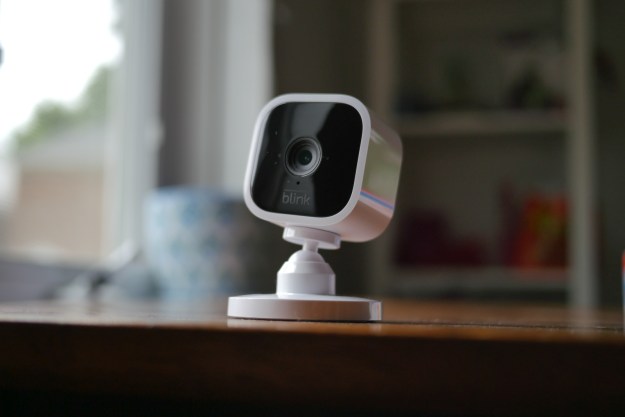 “Just another middle-of-road offering in an increasingly competitive low-cost space.”

After tackling the outdoors with its wireless security camera, Amazon subsidiary Blink is out to replicate the same success indoors with the Blink Mini. What’s notable about it from the get-go is its super-affordable $35 cost. Price alone, of course, isn’t a measure of a camera’s true worth.

Setting up the Blink Mini is a breeze, especially when you compare it to its outdoor sibling, the Blink XT2. Unlike that camera, the Blink Mini doesn’t require a sync module because it connects directly to a home’s Wi-Fi network. Which makes sense, given that it’s meant to be stationary somewhere in the home.

The app offers a straightforward layout that makes it easy to quickly jump into a live view, see all of the clips stored in the cloud, and even modify some of the settings. While the app’s look won’t win any awards, I don’t mind it at all because all the functions of the camera are easily accessible and not tucked away underneath a cumbersome menu interface.

During the setup process, the app required me to verify my email address in order to log in properly. While it wasn’t apparent, this is actually 2-factor authentication, which is a relief because it’s an extra layer of security for those worried about hacking. It’s only available via email address — there’s no option to choose a phone number instead.

I’m happy to see there’s an option to set up activity zones, so that motion detection can be set for specific areas within the camera’s view. I can block out areas to reduce false alerts, but it won’t stop the Blink Mini from constantly recording footage whenever movement is detected in those zones — like a door opening, a pet coming into view, or some other minor activity. In contrast, cameras like the Google Nest Cam IQ Indoor leverage facial-recognition technology to record only when an unknown face is encountered.

Currently, the Blink Mini uploads video clips to the cloud with a total allotment capacity of 120 minutes, thanks to the free trial of Blink’s Subscription Plan. This will change come December 31, 2020, when users will need to subscribe to its $3-per-month plan for continued cloud storage. There’s no local storage, but the company plans to release the Blink Sync Module 2, which will work with the Blink Mini to store clips locally onto a flash drive.

I’m happy to see there’s an option to set up activity zones.

When accessing a live view, a blue LED lights up inside of the camera to indicate someone is watching. While having a visual cue is great, I would have liked an accompanying audible alert.

There’s nothing pretty about the Blink Mini’s design. It’s generic, with an all-plastic construction that feels a bit on the cheap side.

I do like that the included USB cable has a long enough reach to mount it to a wall. This gives the Blink Mini a more commanding presence than when it’s simply laid on top of a flat surface. Due to its 110-degree field of view, it’s best to place it in corners to adequately cover an entire room.

Soft on the details

The Blink Mini captures video in 1080p resolution. Looking over the footage, it’s a bit soft on the details, which is expected given its price. Some other notable quirks include artifacting elements that pop up in the shadows even when there’s ample lighting, a colder color temperature, and an inability to handle high-contrast scenes. It’s far from perfect, but at least the footage is usable enough to determine who’s in the frame and what’s going on.

The infrared night vision kicks in to provide some clarity when there’s not a lot of ambient lighting around. Details take a significant hit, but that’s generally expected. The built-in speaker produces crisp audio, which makes two-way conversations a breeze.

It may not look pretty, nor does it pack a ton of features, but the Blink Mini offers all the bare essentials of a security camera.

Yes. The Wyze Cam V2 offers an impressive range of features, including the option to transform into a webcam.

It looks and feels cheap, but if it’s left undisturbed on some wall or counter, you shouldn’t have to worry much about it going bad. Blink offers a 1-year limited warranty that covers it for defects and normal use.

If you’re already invested in the Blink ecosystem, it’s a sensible addition because of its low cost. If not, you can find better alternatives without spending a fortune.