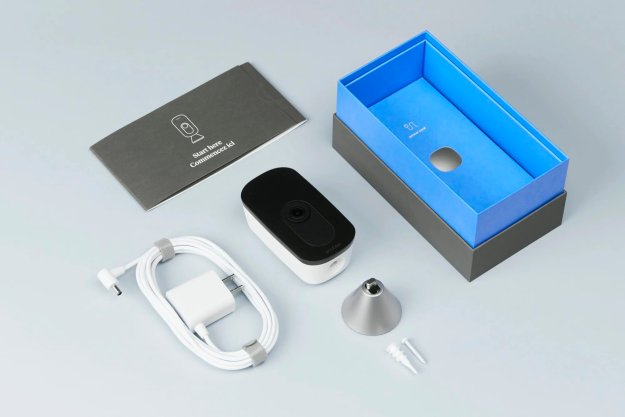 “If you're serious about privacy, the ecobee SmartCamera is the home security cam for you.”

The Ecobee SmartCamera is a small, powerful security camera that packs a lot of features into its tiny frame. It’s also one of Ecobee’s first endeavors beyond the popular smart thermostats for which the company is best known.

This $179 security camera records 1080p video with a 5-megapixel sensor, a 180-degree field of view, and pan-and-tilt capabilities. It also has a siren built into it that, while not loud, will at least startle anyone that doesn’t expect that much volume to erupt from a camera so small.

The SmartCamera can tie into existing Ecobee equipment, like smart thermostats, motion sensors, and door/window sensors. We received a unit to try out and review, and found it to be both easy and intuitive to use, but the setup process was more complicated than it needed to be. The Ecobee SmartCamera provides an overall great experience, but could use refinement in a few areas.

Out of the box, the device is easy to assemble. The base attaches to a magnetic piece and holds the camera securely in place, either from the back or from the bottom. The next step was setup. Unfortunately, this is where a few problems cropped up.

The Ecobee SmartCamera can be set up via HomeKit or through Airport setup. The HomeKit installation is a simple step-by-step process. There’s even a HomeKit registration sticker on the back of the camera that you can scan to simplify things. After this, the connection had to verify the camera. This step failed numerous times, requiring a hard reset after each failure.

To Ecobee’s credit, the app walks the user through every step of the process. Every error code is documented and a solution given. The app even makes it easy to contact Ecobee support if you encounter something that isn’t so easily remedied. First impressions matter, however, and the SmartCamera left us frustrated with the installation.

Frustrating installation aside, once the SmartCamera was up and running, it operated like a dream. The 180-degree field of view is impressive. The entire field isn’t visible at once, but the pan-and-tilt capabilities allow the user to move their viewpoint around the room. The SmartCamera also has a tremendous digital zoom function, allowing you to focus on minute details in the frame.

The video feed is clear and sharp during the day. We could easily read text on boxes and a set of hand trucks (the camera was tested in the middle of a move.) At night, the camera still provides a clear view, but its range takes a hit. The feed remains clear, but loses resolution when zoomed in.

The included siren is just loud enough to be annoying, but not so much so that it hurts the ears. It also isn’t loud enough to draw much attention from the neighbors, but it might startle an intruder. It isn’t likely to scare anyone away, as it can be easily muffled with a blanket.

The SmartCamera will alert you via push notifications when it detects motion and can save videos for up to 2 minutes. You can review footage for up to 14 days if you subscribe to Ecobee Haven. There’s a free one-month trial of the service, which includes entry and occupancy detection, smart notifications, and auto arm/disarm. The service is reasonably priced at $5 per month for the “Essential” plan and $10 per month for the “Extended” plan. The “Essential” plan covers home monitoring and video for a single camera, while the “Extended” plan covers the same for an unlimited number of cameras.

The 180-degree field of view is impressive.

The Ecobee SmartCamera also has Alexa built right into the device, and is capable of music streaming, calling, and smart home control. In a growing smart home ecosystem, it’s convenient to be able to tap into Alexa. There’s also a feature called SmartFocus, which will leverage the digital pan-and-zoom feature to keep a person focused in the center of the frame when motion is detected. This is especially useful and something you don’t find too often in home security cameras.

Overall, the features on the Ecobee SmartCamera set it apart from much of the competition. It has a number of minor features, like Window Mode, for use when the camera is facing out a window. It disables the infrared lights to eliminate reflections off the glass.

Ecobee nailed privacy right out of the gate. You are required to use two-factor authentication with the SmartCamera, which shuts out many of the biggest potential threats right away. The video feed is encrypted, and all video is processed onboard the camera, not in the cloud. This means the footage is significantly safer than it would be were it broadcast back and forth. The Ecobee app isn’t password-locked by default, although users can add more security in their phone settings.

The most interesting privacy feature is that the SmartCamera shuts down when you’re at home. This feature can be disabled, but is activated by default. The SmartCamera uses your phone’s location to detect when your phone is close by and automatically turns off recording for total privacy for you and your family. It’s a great feature, especially if you dislike having a security camera recording you while you’re at home. It’s easy to forget to turn the camera off manually, so enabling the auto-shutoff feature removes one more layer of complication.

At roughly $180, the Ecobee SmartCamera is priced similarly to some of its rivals. While the upfront investment is definitely more to get the full use out of the device — and you’ll need the subscription service on top of that — it isn’t a bad price given the features. Ecobee has proven itself to be one of the top players in the world of smart thermostats, so it’s exciting to see the company enter a new segment of the smart home market with such an impressive debut.

The Ecobee SmartCamera is a great option at its price point, but if you’re looking for a slightly more affordable security camera with better resolution, check out the Nest Cam Indoor. It’s cheaper at $130, but trades a few features in favor of 4K resolution and a lower price. If money is no object and you want the absolute best security camera for your home, the Arlo Pro 3 is a great choice.

The Ecobee SmartCamera is designed to operate between 32 degrees and 104 degrees Fahrenheit, at an optimal humidity below 85%. Unless something catastrophic happens, the indoor conditions of your home should never exceed this. If the camera is in storage, it’s even more durable. An inactive SmartCamera can withstand temperatures from -4 degrees to 140 degrees Fahrenheit. It’s a robust, sturdy camera that should last for years with proper care.

If that’s not enough to convince you, there’s also a 3-year limited warranty that covers defects and normal use.

Yes, the Ecobee SmartCamera is a solid purchase. Despite the issues with setup, the number of privacy features the SmartCamera offers make it a great investment in an increasingly privacy-focused world.

Don’t make another PowerPoint without knowing these 3 tricks

The last Nvidia GPUs have been cracked by crypto miners

Can your smart home save you money on homeowners insurance?