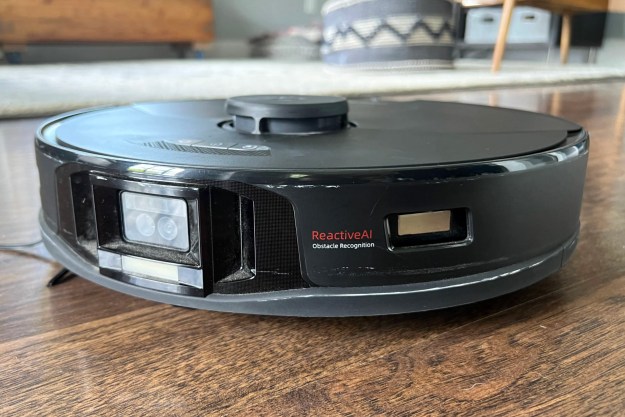 “Go back to your Netflix. Roborock's S7 MaxV Ultra has the cleaning handled.”

Roborock’s S7 MaxV Ultra has all the deliver-me-from-inconvenience appeal of a ‘90s infomercial: It’s a robovac! It’s a robomop! It’s a robovac and mop in one! And when it’s done, it cleans and empties itself. Cue black-and-white footage of a frazzled guy fussing with a mop and bucket — cut to color footage of a sleek robot prowling the floor, leaving gleaming hardwoods in its wake.

There’s a reason I named the Robovac S7 MaxV Ultra my most coveted product of CES 2022. And that reason is my 95-pound Great Pyrenees mix, Marty, whose abysmal shedding necessitates near-daily vacuuming. So when I had a chance to test the real deal in my fur snow globe of a home, I took Roborock up on the opportunity. While reality might not be quite as dramatic as my Ron Popeil fever dream, there’s no question that the S7 MaxV Ultra is a next-level robovac with skills that almost nothing else can match right now.

A class of its own

Robovac-robomop combos have come a long way in a short time. Ecovacs Deebo Ozmo T8 AIVI was one of the first in 2020, but it and others from its generation came with one big sticking point: they don’t actually mop and vacuum at the same time. You need to run it as a vacuum, then manually stick on a mop pad and run it again as a mop. Roborock solved this issue with the S6 MaxV, which vacuums and mops in one run, but that bot came with its own asterisk: you needed to manually wash the mop pad after a mopping run, which is not exactly automatic.

The S7 MaxV Ultra banishes all these hassles with a jack-of-all-trades base station. After mopping and vacuuming your home in one sweep, the S7 MaxV Ultra returns home to charge, empty collected debris into a bag, drain dirty water into a reservoir, refill with fresh fluid, and even wash its own mop head. If your standard robovac charging station is a Chevron, this one is a Formula 1 pit lane.

In light of everything it does, I expected setting up the S7 MaxV Ultra to require the patience of assembling an Ikea air purifier, but in truth, it’s a 20-minute weeknight task. After finding a home for the absolutely goliath base station (which could be a challenge for apartment dwellers), you plug it in, remove a few packing pieces, top it off with water, and drop the vacuum down to charge. A QR code on the robot is supposed to effortlessly connect to the Roborock app, but it didn’t like my home network. Instead, I had to manually connect to the temporary Wi-Fi network the bot created.

If you’re used to watching robot vacuums aimlessly bounce into chair legs and baseboards, seeing the S7 at work will be a revelation. With the magic of LiDAR (think radar but with light), the S7 actually sees your home in 3D and plots a path around obstacles. On the S7’s first run, I watched it proceed cautiously through a maze of chair legs once, then weave back between them as gracefully as a human would drive.

All that sensor data adds up to a startlingly accurate rendition of your home’s floor plan, which you can pan around in the Roborock app with all the ease of Google Maps. We’re not just talking walls. It automatically names rooms, differentiates carpet from tile from hardwood, and even identifies furniture like sofas and TV stands. While it’s not perfect (it thought my clawfoot tub was a bed), it’s incredibly impressive, and you can easily correct the little bits it gets wrong in the app.

Room detection also means you can clean just a few areas of your home rather than firing it up for the whole house. This feature is a bit clunky in the app, but it’s effortless after connecting to a voice assistant. Asking Alexa to clean the kitchen on the way out the door and return to sparkling floors really does feel like the future.

Not all the bells and whistles made us swoon, though. The onboard camera is one of those nice-in-theory options you’ll forget about after spying on the dog once, and the remote control option is kind of baffling. If I wanted to manually position a vacuum over a mess, I’d use a stick vac, not a controller.

So how does it clean?

On our hardwoods and tile, the vibrating mop did an admirable job banishing dust, dirt, and paw prints in a single pass. You can use plain water or spike it with Roborock’s $16 cleaning solution, but we didn’t notice any difference in cleaning ability after the upgrade. We got clean, streak-free floors that dried in just a couple minutes either way. Thanks to a remarkably efficient mopping process, the dock’s 3-liter water capacity lasted us weeks of frequent mopping. In fact, we found ourselves maintaining the reservoirs for another reason first: stink.

Dumping rancid mop water down a utility sink is a hold-your-breath chore.

Yes, while the S7 MaxV does away with the ickiness of cleaning mops, all that waste water has to go somewhere. It turns out that wringing concentrated floor goo into a room-temp reservoir eventually stews up a nice odor. This lovely aroma wafts from the dock after a couple weeks, and dumping rancid mop water down a utility sink is a hold-your-breath chore you’ll want to draw straws on.

As a vacuum, the S7 MaxV effortlessly handled our hardwoods but seemed to be leaving a lot of dog fur embedded in our carpets. As a test, I ran my four-year-old Roomba on a 12-by-10 area rug immediately after the Roborock finished, and it pulled up a downright embarrassing amount of dog fur. Something wasn’t right.

Upon further investigation, I found that Marty’s coat was completely jamming the S7’s internal dust bin: the clots of fur were so thick, even the dock’s powerful suction couldn’t dislodge them. No wonder it wasn’t cleaning well.

After manually cleaning the bin, it performed better, but it still seemed to be missing some hair. I retested the Roomba on a carpet the Roborock had “cleaned” and once again discovered that it was leaving behind a disgusting amount. This is what it missed:

If that sounds puzzling given its impressive-sounding 5,100pa of suction, consider the business end of this bot. The S7 MaxV has just a single rotating beater brush, while the Roomba has two, with a more aggressive pattern. The S7 doesn’t perform an unacceptable job on carpet, but it’s clear that other machines offer a much deeper clean.

A bot you can live with

What it lacks in sheer cleaning power, the S7 MaxV Ultra makes up for with its tank-like mobility. We have one rug that is too tall for Roomba to climb up on and another that’s simply too shaggy. The Roborock bulldozes over both without complaint, intelligently lifting its mop right on cue.

Roborock’s ReactiveAI 2.0 obstacle avoidance also helps keep it out of trouble. You can watch it approach an obstacle like a sock or shoe, examine it, and then work carefully around it. But the technology doesn’t work as well for smaller obstacles, like charging cords and shoelaces, which our review unit ingested a few times. And though its hazard detection correctly identified a floor heating grate as a hazard after getting snagged on it multiple times, the vac won’t start to automatically avoid it. You still need to manually box out a “no-go zone” in the app.

As someone who grinds his teeth at the whir of a Roomba, I was delighted by how incredibly quiet the S7 MaxV Ultra is. While I still scheduled it to run it when I’m out of the house, it produces more of a tolerable hum than a dental drill whine, and you could easily watch TV in the same room as it does its thing.

We’ve already conceded that the S7 MaxV is not the strongest robovac on the block, so what could possibly make it worth $1,400? Well, suction isn’t everything.

When we first published this review, nothing matched the Roborock S7 MaxV Ultra, but a new competitor has since emerged: The new Roomba Combo j7+. We haven’t yet had a chance to pit it against Marty’s fur, but with dual beater brushes, a smaller base station, and iRobot’s sterling reputation, it’s worth a close look. Right now, we’re also seeing the new Roomba retail for around $899, while the Roborock fetches $1,060.

Older competitors both come with caveats that prevent them from matching the S7 MaxV Ultra. We haven’t tested the less expensive Narwal T10, but the lack of a beater brush suggests it will perform poorly on carpet (and other reviewers agree). The more expensive Ecovacs Deebot X1 Omni nearly matches the S7 MaxV Ultra feature-for-feature, but without the ability to raise and lower its mop on the fly, it needs to do two separate sweeps of your home.

Roborock isn’t quite as established as iRobot in this game, but it’s not a fly-by-night Amazon competitor, either. The lifespan of any mechanical device like this will depend a lot on how often you use it and how roughly you treat it. After six months of extremely frequent use, all signs point to a long life. From the silicone-gasket reservoirs with sturdy handles to the flip-top door for the dust collection, everything feels well-built and durable. We also like that the Roborock app recommends simple DIY maintenance, like cleaning sensors.

When something inevitably breaks, we’re encouraged by the availability of replacement parts and accessories like mop cloths and filters in the Roborock store at reasonable prices (a new beater brush, for example, will set you back only $23).

Yes. It may seem odd to recommend a robovac that can be out-cleaned by a cheaper competitor, but these devices are all about convenience, not sterilizing your home to a surgical clean. With its all-terrain tenacity, obstacle avoidance, and self-emptying features, the Roborock S7 MaxV Ultra is the most hassle-free robovac you can buy. But if you’re a pet owner or your house has a lot of carpet, you may be happier with a dedicated robot vacuum.

Topics
The j7+ is iRobot’s first two-in-one vacuum and mop combo
Is a bidet worth it?
What are HEPA filters, and can you clean them?
How often should you use your robot mop
Cyber Monday: Save on Google Nest Mini, Nest Hub, and Nest Audio
The best air purifiers for mold issues
Dyson’s best cordless vacuum (V15) is $100 off for Cyber Monday
Lorex Cyber Week Sale: Save up to 50% on smart home security gear
This robot vacuum is $99 in Walmart’s Cyber Monday sale
This self-emptying Shark Robot Vacuum is $200 off for Cyber Monday
The best smart plugs of 2022: Our top picks
Score $90 off an Alienware gaming chair for Cyber Monday
This Keurig coffee maker is super slim, and $50 off for Cyber Monday