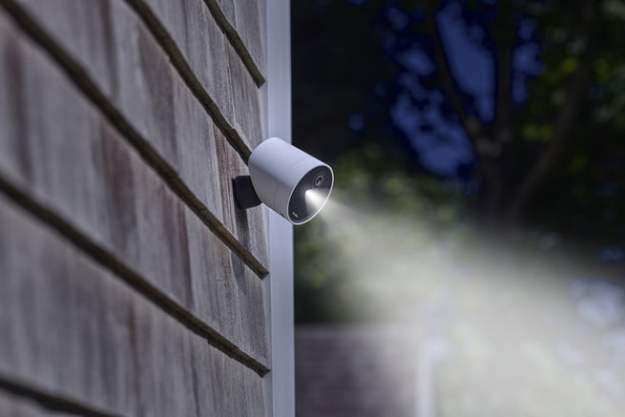 “The SimpliSafe Outdoor Security Camera is a long-awaited, but slightly flawed addition to the lineup.”

Outdoor smart security requires multiple levels of ingenuity and protection as Mother Nature, UV rays, and other suburban and city-based variables are forces that indoor tech simply doesn’t have to contend with (for the most part). Fortunately, many smart brands are on top of this, offering home security products tailor-made for your backyard, patio, or open-air space in the form of cameras, floodlights, and video doorbells.

SimpliSafe, a leader in the smart security marketplace, has long offered a myriad of in-home security tech, encompassing nearly every element of a full-suite surveillance system, from cameras and smoke detectors to temperature and glass-break sensors. One area where the company lagged behind the competition (a bit) was outdoor products — but not anymore.

The new SimpliSafe Wireless Outdoor Security Camera is the company’s first dedicated outdoor offering, a fairly small camera that we had the great pleasure of testing out.

If you’re looking for an outdoor camera that you can buy on a budget, pair to your Wi-Fi, download an app for, and start using right away, the SimpliSafe way may not be the ticket. In order to use the SimpliSafe Wireless Outdoor Camera, you’re going to need to purchase one of SimpliSafe’s starter kits. Do know that even the most basic starter kit (with the Outdoor Camera add-on) will run you about $250. Compared to competitive outdoor cameras like the Nest Cam ($180) and Ring Spotlight Camera ($199), you’ll be investing a little more from the get-go if SimpliSafe is your brand of choice.

For my setup, I went with the bare essentials — a base station, keypad, and the Wireless Outdoor Camera. Getting my system activated and online was quick and painless. All you really have to do is download the SimpliSafe app and follow the on-screen prompts for configuring a system for the first time.

Once your base station is live, adding the Outdoor Camera is easy, too. Just tap the hamburger-dropdown in the top-left corner of the Home Screen, select Set up a camera, then follow the on-screen prompts. A word to the wise is that you’ll want to map out a decent block of time for actually charging your Outdoor Camera’s battery (SimpliSafe recommends five hours for a total juice-up).

From an aesthetic standpoint, I really love the way the Outdoor Camera looks and feels. Just by holding it, one can tell it’s a sturdy piece of hardware. An IP-65-rated device, the Outdoor Camera is built to withstand heavy rain, snow, and winds, as well as offer total protection from dirt, debris, and insects. You won’t have to worry about temperature either, as the Outdoor Camera can withstand temps as cold as -20-degrees and as hot as 113-degrees Fahrenheit.

Visually, the off-white casing and black lens housing blend in pretty well with most outdoor décor. When installing and mounting my grandmother’s Blink Outdoor Camera, expletives filled the air as I tried, again and again, to get the camera body clicked into the mount barring. So you can imagine how much I loved SimpliSafe’s super-easy magnetized mount. Just two screws into the vinyl siding and you’re ready to pop the camera on.

The Wireless Outdoor Camera handles up to full 1080p recording and live views, with options to scale down to 720p or 480p (both are less taxing on your internet connection). Real-time footage and event clips look great. The visuals I experienced were bright and clear, with super-accurate colors and contrast — I’m guessing that’s thanks to the camera’s onboard HDR support.

The 140-degree lens presents an impressive vantage, too. From my second-floor apartment’s porch, the camera captured a near-perfect wide-angle view of the entire parking lot and building across the street — with little to no pixelation. When a person walked into view, the camera followed their every move with minimal lag.

While the camera lens lacks an optical zoom, what you will get is an 8x digital push-in for locking onto faraway people or object of interest. To use this feature, all you have to do is launch the camera’s live view, tap the image with two fingers and pinch out. The results are serviceable, but not astonishing. Similar to the type of zoomed-in quality you may get from a basic point-and-shoot camera, pixelation and distortion start occurring pretty rapidly, but the most essential shapes and colors remain intact.

Such a feature may not go too far in helping authorities establish what a faraway perpetrator looks like, but it’s still useful for things like zeroing in on the make and model of a car parked across the street.

One of my favorite features of the Outdoor Camera is the ability to choose between two different Night Vision experiences. Standard is the default setting (it’s better on battery life) and it displays images up to 30 feet away in black-and-white. Then there’s Spotlight (harder on the battery), a mode that balances the camera’s built-in spotlight and to display a colorized nighttime view up to 10 feet away.

As mentioned, you’ll want to allocate about five hours for your first total charging of the Outdoor Camera battery. Depending on what settings you have assigned to your Outdoor Cam, SimpliSafe promises between three to six months of battery life before a recharge is required.

The SimpliSafe app (for iOS and Android devices) is a feature-laden controller for your entire SimpliSafe suite and a great (but not perfect) way of accessing, controlling, and customizing your Outdoor Camera. We’ve covered the finer details of the app before, so for this review, we’ll just focus on what it brings to the camera experience.

When you launch the app, a static image from each of your SimpliSafe camera feeds will be displayed on the Home Screen. By tapping the Watch Live icon, you’ll be taken to a real-time view of what your camera is currently seeing. While in live mode, you can pinch out for digital zooming, start a two-way audio chat, and record video clips. Once you’ve finished recording, you can save the clip to your phone or share it with others through text or across certain social media platforms. There’s also a jump-to-timeline button that will bring you to the app’s log of motion-triggered event clips.

The motion event log is also accessible from the home screen (simply tap Timeline in the bottom-right-hand corner). Each recording features its own dropdown window that will tell you what time the event was captured and how long it lasted, along with the option for video playback. If you’ve initiated any recordings yourself from the Watch Live screen, they’re logged here, too (designated as User Recording).

By tapping the gear icon in the upper-right-hand corner of the home screen, you’ll be taken to Camera Settings. Here, you can do things like change your camera’s name, adjust picture quality, choose between night vision modes, toggle mic, audio, and sirens on/off, and more.

One other field that offers quite a bit of customization is Motion Detection. When you tap this option, you’ll be taken to a separate Motion Detection menu where you can adjust motion sensitivity and choose whether or not you want the camera to detect people only or all motion (a convenient adjustment for busy apartment developments like my own). Then there’s my favorite add-on — a gridded Activity Zone customizer that allows you to choose what areas you don’t want the camera to pay attention to.

One major and infuriating trouble I had with the app was getting one of the most basic commands to even work — launching the live view. After tapping Watch Live, my SimpliSafe app would often start buffering like the days of dial-up. After about 30 seconds (or more), this would result in a “camera disconnected” message. I would then have to try and relaunch the live view, or completely restart the app. On average, I would have to try and launch live view at least three times before it actually worked.

To troubleshoot, I even unplugged and relocated the base station to several new points in my living room, which did nothing to help.

Whether you want to experience SimpliSafe’s full assortment of monitoring features or just want your camera(s) to be able to record video, a SimpliSafe subscription is required. There are two memberships to choose from, with no contracts and anytime cancellation for both tiers.

Camera Recordings Only is just that — unlimited HD recordings and real-time footage for up to five SimpliSafe cameras, priced at 33 cents/day (about $10/month).

The second tier, Interactive 24/7 Professional Monitoring, includes 24/7 police, fire, and ambulance dispatch, built-in cellular data support, water and temperature monitoring, and unlimited recordings and real-time footage for up to 10 Simplisafe cameras. It is priced at 83 cents/day (about $25/month).

If you’re looking for a stand-alone outdoor camera that you can chuck on a mount, pair to your network, and tap into from a mobile app, the SimpliSafe Wireless Outdoor Camera does most of these things well — with the exception of being system-inclusive.

If you already own a SimpliSafe system and want an outdoor add-on, or are building a new smart security suite, the Wireless Outdoor Camera is one component you probably want to add. Yes, it can be glitchy now and then, and some touted features (like the 8x digital zoom) aren’t as good as you’re led to believe, but in terms of overall quality and performance, it’s a solid outdoor offering.

Based on its weatherproofing and temperature protection, we doubt you’ll experience much in the way of element-driven hardware failure from the SimpliSafe Wireless Outdoor Camera. For those faults that do sneak in, the company offers a three-year warranty on all its equipment.

In terms of image quality and reliability, the Arlo Pro 4 is one of our current favorites for outdoor cameras, offering a 160-degree lens, plenty of customization, and advanced monitoring plans. For a budget-friendly stand-alone option, there’s also the Wyze Cam Outdoor — featuring an IP-65 bite-sized body with Alexa and Google Assistant support and a convenient time-lapse feature.

If you’re a SimpliSafe devotee, then yes. The SimpliSafe Wireless Outdoor Camera is a fine addition to a full SimpliSafe system, providing a set of eyes (and ears) for the world outside your walls and windows.