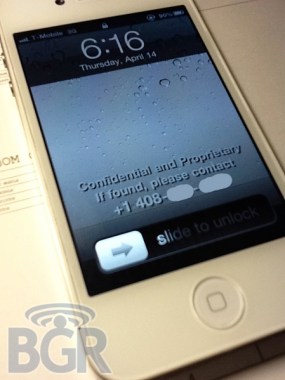 Apple is reportedly testing a model of its popular iPhone for the T-Mobile network, according to Boy Genius Report. The rumor is backed up by pictures of a device with, sure enough, a little “T-Mobile” on the indicator bar on the top of the phone, which these days only reads “AT&T” or, now, “Verizon,” in the United States.

According to BRG, the model number on what appears to be  a white iPhone (but not the iPhone 4 or iPhone 5) is N94. The model that runs on Verizon’s CDMA network is N92, while the AT&T (GSM) version is the N90. So the model number sequence adds weight to the theory that this is, in fact, an iPhone for T-Mobile’s AWS 1700 MHz 3G band.

Another interesting tidbit is that the device is running what is rumored to be the next version of iOS, which appeared on two videos from Vietnam earlier this week. In both cases, the iOS included internal Apple apps, like Radar and the company directory, suggesting that they come straight from Cupertino.

The device is not, it seems, your standard white iPhone 4. (Not that many of us know what one of those looks like — at least, not until next week.) The T-Mobile version has a different proximity sensor than the currently available iPhone. And other factors indicated that the pictured device is a testing unit that’s not intended to be sold to the public.

So, that’s all the reasons to believe that this rumor might be true. Here’s why it’s possibly all bull pucky: First, T-Mobile exists in Europe, as well as the US, so this could be white European model being passed off as a test unit for T-Mobile USA. As BRG points out, it could also be an entirely different device disguised as an iPhone. And, of course, someone could have photoshopped the whole darn thing.

Of course, AT&T is in the process of purchasing T-Mobile. It’s unclear if the $39 billion deal will be approved by federal regulators. But chances are it will — in which case, the iPhone will be available to T-Mobile customers, regardless of whether this rumor is true or not.

Video-editing app LumaFusion to get a Galaxy Tab S8 launch
The best phones for 2022: Which smartphone should you buy?
Reverse wireless charging on the iPhone gets one step closer to reality
Does the iPhone 14 have an always-on display? Know this before buying
How to hide photos on your iPhone with iOS 16
Google wants you to know Android apps aren’t just for phones anymore
I have a confession — I may have been wrong about the Apple Watch Ultra
The best Samsung Galaxy Watch 4 screen protectors
Can’t stand using Instagram in 2022? This app fixes everything you hate about it
Apple AirPods Pro 2 vs. Google Pixel Buds Pro
These 80+ apps could be running adware on your iPhone or Android device
Stage Manager is coming to older iPad Pro models after all
Samsung just copy-and-pasted iOS 16’s lock screen in its One UI 5 beta