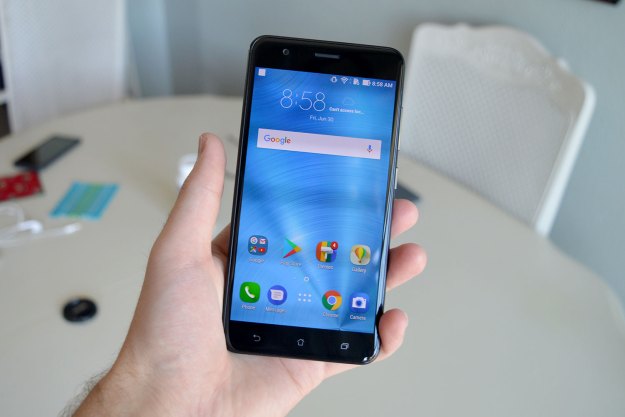 “The Asus Zenfone 3 Zoom has some great qualities, but its signature camera is a mixed bag.”

Asus has dropped the bulky camera bump and the price of the latest entry in its Zenfone Zoom smartphone series. Unlike its predecessor, the Zenfone 3 Zoom doesn’t look like a point-and-shoot camera, but it still retains a 2.3x optical zoom. The question is, has the camera, the spotlight of the Zoom lineup, improved? The answer is yes, but our Asus Zenfone 3 Zoom review finds the camera capabilities are hindered by the phone’s other shortcomings.

The Zenfone 3 Zoom isn’t a bad-looking device, but it’s hardly unique. It has a sleek metal unibody with a minimalistic rear, which houses the camera, fingerprint sensor, and the Asus logo at the bottom of the device. The all-metal unibody design looks good, and the added durability is a plus. Glass-backed phones look great – but they have a far higher risk of being easily damaged and cracked.

On the front of the phone, Asus has gone for capacitive navigation buttons on the bottom rather than on-screen icons. The front does look a little outdated – capacitive buttons seem to be on their way out and displays are starting to get larger, with smaller edges around like the Samsung Galaxy S8, LG G6, or even the recently-announced mid-range LG Q6.

On the right edge you’ll find a volume rocker and power button, while the left edge is where the SIM card slot is located. On the bottom there’s a USB Type-C charging port, which is the growing standard for most smartphones these days. Flanking the charging port are a headphone jack and speaker grill.

Overall, the design is uninspiring, and we also have a few qualms. For example, the fingerprint sensor is a little high up on the back of the phone, making it a little hard to reach. That’s also true of the volume rocker.

The display is more promising, though nothing to get excited about. The 5.5-inch AMOLED screen has a 1,920 x 1,080 pixel resolution that does the job — it’s sharp, with vibrant colors, and deep blacks.

Under the hood, there’s a Qualcomm Snapdragon 625 coupled with 3GB of RAM keeping things running (there’s 4GB in the international version). For storage, there’s a choice of 32GB, 64GB, or 128GB, and there’s even a MicroSD card slot in case you wanted to add more space.

The specifications are quite similar to the $280 Moto G5 Plus, which comes with 4GB of RAM in the U.S.  We found the performance to be more than enough for day-to-day use, unless you’re a heavy mobile gamer. Multi-tasking performed well with apps like Gmail and Facebook, and the user interface was generally quite smooth.

Don’t expect top-tier performance with the Snapdragon 625. If you’re a heavy gamer, you need the best multi-tasking abilities out there, or you simply want to future-proof your device a little more — you may want to go for a phone with a slightly more powerful chip (check out the OnePlus 5). If you only use your phone for web browsing, email, social media, and some light gaming, you’ll find more than enough power in the Zenfone 3 Zoom.

Here are a few benchmark scores we received for reference:

The results are pretty much on par with the likes of the recently reviewed Lenovo Moto Z2 Play, which has a slightly more powerful Snapdragon 626 processor, and the Moto G5 Plus, which has the same Snapdragon 625 processor as the Zenfone 3 Zoom.

It’s a solid mid-range phone, and its performance should be good for most people.

What makes this device unique is the camera, or so Asus says. It was easy to point out with last year’s Zenfone Zoom, thanks to the large camera lens on the rear. But with the Zenfone 3 Zoom, things are a little more subtle — even with the dual-camera setup.

There are two 12-megapixel camera on the rear with f/1.7 aperture, optical image stabilization, laser and phase detection autofocus, and 2.3x optical zoom – though you can go all the way to 12x with digital zoom. The results are hit or miss, but let’s start with the good.

One of the great things about this camera is that it offers an excellent manual mode, with a ton of different preset modes for those who don’t want to delve too deep into the settings. The 2.3x optical zoom is helpful and offers solid detail, but you really shouldn’t go up to the max 12x digital zoom, as you’re simply just cropping the image.

The camera is equipped with 4-axis optical image stabilization, which helps eliminate blur from shaky hands or sudden movement.

Now, this is a midrange device – so don’t expect top-tier performance, because you won’t get it.

Now for the bad — the camera is only just usable in low-light. It’s not all that surprising – few phones have come close to offering great low-light capabilities, but with such a camera-centric device, you might expect better. In broad daylight, photos are more saturated than we’d like, and details aren’t as sharp. Not only that, but colors just seem a little off. Photos look somewhat like an oil painting rather than a photograph – something we found in the original Asus Zenfone Zoom too.

A recent update added a Portrait Mode, similar to the one found on the iPhone 7 Plus. Sadly, it doesn’t work that well. It’s supposed to blur out the background of a subject, for a nice “bokeh” effect, but Asus’ version blurs the photo in weird places, and often only spots behind the subject of the photo. It certainly needs work.

The camera is good for a mid-range phone, but it’s far from the huge selling point it should be.

Things are a little better in the battery department – it has a hefty 5,000mAh capacity, which translated to easily two days of use without any issues. It last for days when left on standby, which is always a plus. If you’re looking for a device with a long battery life, this is an great choice.

A key part of the user experience is software, and traditionally Asus hasn’t done too well in the category. During the course of this review, the phone was finally updated to Android 7.1.1 Nougat, but the update didn’t really change all that much apart from making the phone a little more secure.

To be fair, ZenUI is much better than it ever has been, and since the phone is carrier unlocked, it means there’s less bloatware on it. There are some handy features, such as how you can create app folders in the app tray as well as on the home screen. The pre-installed apps present can be helpful, like the FM radio, and the built-in file manager. Thankfully, you can disable or even uninstall some of these pre-installed apps if you don’t want to use them.

But the user interface just feels clunky. There are oversized icons, overly bright colors, and far too much content crammed into small spaces. It often feels as though there’s just too much going on — quite the opposite of what you’d expect for a user interface called “ZenUI.”

Asus offers a standard one-year limited warranty on the phone, and it covers the basics – manufacturing defects that cause problems to the phone’s performance.

The Asus Zenfone 3 Zoom costs $330, which is affordable, but it’s not an absolute bargain either. You can get it now from a range of different websites, including Amazon, Best Buy, B&H, or the Asus website itself.

The Asus Zenfone 3 Zoom is a mixed bag. It has great battery life, and solid performance for its price, but while the camera has improved it still doesn’t live up to expectations, and ZenUI is far from our favorite user interface.

Yes. The Asus Zenfone 3 Zoom offers a solid camera and great battery life, but there are better phones for the money. Read the Best camera phones and Best smartphones lists for our top picks. For not much more, for example, you could get the new Lenovo Moto Z2 Play on Verizon, which places an equally heavy emphasis on the camera, is a better performer, and offers a less cluttered user interface. The only downside is that it costs $500 unlocked. If you’re not willing to spend the extra money on the Moto Z2 Play, you could also go for the Moto G5 Plus, which will offer equivalent performance thanks to the Snapdragon 625, and a similar camera and Android experience.

The Asus Zenfone 3 Zoom should get you through a standard smartphone upgrade cycle, which is two years. If you take excellent care of the device, you may get a little more use out of it, and if you tend to use high-performing apps and multi-task a lot, you’ll find it will slow a little sooner.

No. There are simply better phones for the money out there, like the Moto G5 Plus, the Moto Z2 Play, or the OnePlus 5.

Update: Corrected the article to reflect the fact that there’s only one variant of the phone available in the U.S.