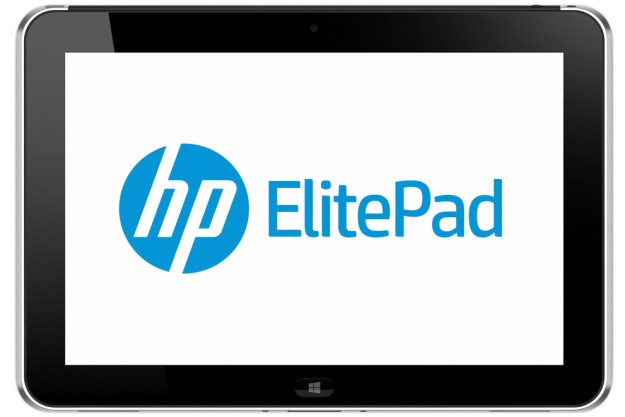 “When judged only as a tablet, the 900 impresses with its light weight, cool operation, bright display, and excellent build quality.”

Technology companies have entered a race. The goal? Successfully fusing the tablet with the laptop. The prize? A product as revolutionary as the iPad. Oh, and money … lots and lots of money.

While the finish line is within every company’s sight, no one knows how to reach it. All attempts so far (including some we’ve reviewed, like the Microsoft Surface Pro and Sony Vaio Duo) are marred by obvious flaws. Worse, those flaws aren’t the result of neglect or stupidity. The problem is just that difficult.

Yet no PC manufacturer can afford not to try. And so we come to HP’s latest entry, the ElitePad 900. This enterprise tablet takes the kitchen sink and serves up three different peripherals that convert the tablet into a laptop – no, wait, a desktop – no wait, a tablet (with ports!). Is HP on to something, or has it created a Frankenstein-like monster that stumbles where it should excel?

My, you’re a small one

Our first thought upon unwrapping the ElitePad 900 was dang, that’s small. We immediately compared it to an iPad (4th generation) and were surprised to find the 900 was slightly smaller in all dimensions and even felt lighter in-hand. The scale confirmed this to be true. The 900 weighs about 630 grams (about 1.38 pounds), while the 4th-gen iPad weighs just over 650 grams (1.43 pounds).

Most of the tablet’s body is constructed from rugged aluminum, though a strip of black plastic exists on the back to improve Wi-Fi and cellular reception. The round edges improve comfort and provide grip when the tablet is laid on a flat surface. We like that the wrap-around aluminum back frames the black bezel, but this touch is slightly soured by a visible gap between the display and the frame.

The ElitePad 900’s display measures 10 inches diagonally and fits a 16:10 aspect ratio, which is better suited for productivity than the 16:9 “widescreen” format most Windows tablets and laptops use. HP has wisely placed the volume and power buttons along a single corner so they’re easy to access in both landscape and portrait orientation.

Ports everywhere (except the tablet)

Enterprise users might scoff when they hear the 900 doesn’t offer any ports besides a proprietary connection along the bottom of the tablet which can connect to USB via an adapter. But don’t worry! There are peripherals that provide ports – lots of ports.

The first is an “expansion jacket” that provides some protection while adding two USB, one HDMI, and a card reader. Though bulky and a bit heavy, it’s a cinch to install or remove. As a bonus, the jacket supports an optional extended battery.

Next up is the keyboard dock, which adds two USB ports and a card reader. HDMI-out is available only through a separate adapter. Like the expansion jacket, this dock is made of plastic – and unfortunately that extends to the hinge, which feels flimsy. HP stressed to us that the dock we tested was pre-production, but also did not claim it would use different materials.

And lastly is the desktop dock. This little wedge of weighted plastic provides four USB ports, Ethernet, VGA, and HDMI. And the dock chargers the tablet when it’s plugged into power (you can also charge via the adapter which comes with the tablet). Though basic, the weighty desktop dock feels sturdy and does its job without issue, which is all we can ask of it.

The hands have it, but don’t want it

Let’s circle back to the keyboard dock, which is the 900’s only distinctive interface feature, and one important to its mission. This is a product of the Elite family, so it’s meant for productivity. A decent keyboard is a must.

Unfortunately, HP failed on the execution. Instead of building a cutting-edge dockable keyboard, the company has produced a subpar peripheral that pales in comparison to the tablet it’s built to accompany. Besides dismal material quality, and a poor hinge, the keyboard dock also suffers from so-so key feel and excessive weight. The only plus is protection. The thick plastic and rubberized frame should withstand a few good wallops. Oh, and the case provides three different levels of tilt, which is nice.

We can’t help but wonder why HP, like Microsoft, has failed to at least meet the standard set by third-party companies like Logitech and Kensington. This is a feature the company should have nailed. Instead, it’s the 900’s most glaring flaw.

The ElitePad 900 ships with a 1280 x 800 display. Compared to the 1080p (and higher) resolutions found in some mobile tablets, the ElitePad’s display may seem lackluster – and it is. Close inspection of fine details, particularly small text, reveals artifacts and pixilation that’s not found on tablets packing more pixels.

That, however, is the entirety of the bad news. The 900 posted strong numbers in our tests for brightness, black levels, and color gamut, all of which lead to a pleasant visual experience. Movie clips were vibrant and documents clear – even in direct sunlight.

Audio quality also proved adequate. Bass is missing in action, but music and movies were enjoyable even at the tablet’s robust maximum volume. Users who need functional sound for presentations and Skype should have no complaints.

As said earlier, the ElitePad 900 is remarkably light and thin. There’s little in the Windows world that can compete (Samsung’s ATIV dockable is closest), and even the current iPad weighs more. Toting the 900 across the country is as easy as carrying it across a room.

But can the battery hold during cross-country flights? Yes – if your plane is quick and you don’t have a layover. Our Battery Eater stress test ate through a full charge in 4 hours and 12 minutes, one of the best results we’ve ever received. The light-load Reader’s Test extended life to 7 hours and 25 minutes, and the Peacekeeper browser benchmark returned 5 hours and 53 minutes of endurance.

These figures don’t reach HP’s stated minimum of 10 hours, but that figure is within reach if the display’s brightness is kept low. HP says life can reach 18 hours with the expansion jacket’s optional battery, but we weren’t able to confirm that given the review unit we were provided.

Of course, without optional battery, the iPad and most Android tablets trounce this tablet’s endurance. There’s simply no way for a light Windows tablet to match the incredible battery life provided by competitors that run a mobile operating system. With that said, we do think the 900’s endurance is enough to get most users through their day.

To obtain tolerable battery life in a small package, HP had to make a sacrifice: the processor. All versions of the ElitePad 900 ship with an Intel Atom Z2760 instead of the more powerful and modern Intel Core architecture.

The consequences of this choice were apparent in our benchmarks. SiSoft Sandra’s Processor Arithmetic benchmark returned a result of 8.32 GOPS, and 7-Zip came to a combined score of 2,659 MIPS. Both numbers are between three and four times behind the figures that an Intel Core i5 mobile processor can reach.

PCMark 7’s general system test further strained the 900, reaching a score of just 1,291. And we couldn’t even run the new 3DMark benchmark we’ve begun to use on all laptops. Instead, we ran the older 3DMark 06 benchmark, which served up an awful score of 449. A typical Intel Core laptop with integrated graphics scores between 3,500 and 4,500.

All these results suggest a tablet that’s embarrassingly slow. However, the 900 can feel quick at first touch. The tablet is responsive to input and the Windows interface never lags. Even Web pages load quickly.

Once you begin to task it with serious work, however, problems appear. Most games are often a lost cause. YouTube is generally smooth but can stutter if other tasks are running in the background. And large documents, such as PDFs and Excel spreadsheets, can sputter and lag at times.

Cool to the touch

Unlike larger Windows tablets, the 900 is passively cooled. There are no vents, and no fan, so the tablet generates no unwanted noise. It does create some heat, warming to as high as 105 degrees Fahrenheit at maximum load. But an iPad running 3D games will often be warmer, and the 900’s back barely rises above room temperature at idle.

HP believes there’s a demand in the enterprise market for tablets that can go feasibly go anywhere and do anything. We agree, but don’t agree that the 900 is capable of filling that role.

Much of the problem lies with the limits of current technology. Atom is the only processor available from Intel that can be used in a thin, light, passively cooled tablet – and it’s too slow. All small Windows tablets will suffer so long as that remains true.

Another obstacle is the price of the extras required to make the ElitePad more than a tablet. The desktop dock and keyboard case are sold for $119 each. The total cost of even the most basic model, with both peripherals added, borders $900. And that doesn’t include the expansion jacket, which is $79.

But while we don’t think HP has fulfilled its stated mission, we do think that the company has crafted a good Windows tablet. When judged only as a tablet, the 900 impresses with its light weight, cool operation, bright display, and excellent build quality.

Even the MSRP of $649 is reasonable because the base model comes with 32GB of storage. The price is right, so the question is: do you want a Windows tablet?

Video-editing app LumaFusion to get a Galaxy Tab S8 launch
Nreal’s Air AR glasses head to the U.S., ready to rock with iPhones
Best Phone Deals: Save on Google Pixel 6, Galaxy S22 Ultra
Best tablet deals for September 2022
Huawei’s Mate 50 Pro is here with an insane 200x zoom
Pixel Watch design video reveals what Google doesn’t want you to see
The best wireless keyboards for 2022
The best wireless earbuds for 2022
Apple rolls out iOS 16 update to fix frustrating camera-shake, paste bugs
Hey look, the iPhone’s Dynamic Island has come to … Android?!?
Why I stopped wearing my smartwatch — and why I haven’t looked back
How to transfer your SIM from an Android phone to an iPhone 14
Google Pixel Tablet leak reveals key specs about the mysterious device