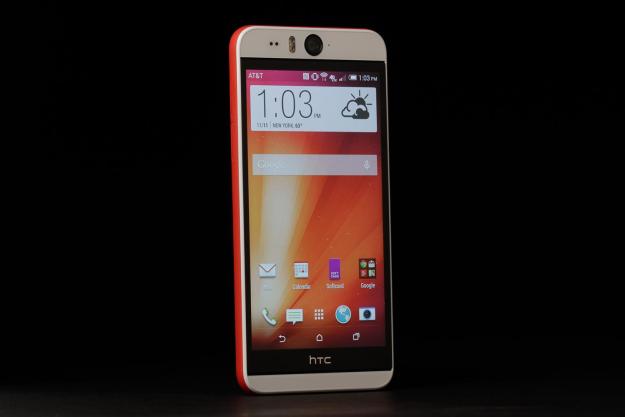 “The HTC Desire Eye is the best selfie camera money can buy. At $550 it is as powerful as some of the best phones on AT&T, and a good deal cheaper, too.”

Do you take at least as many smartphone pictures of yourself as you do of the rest of the world? Do you often find yourself complaining that your selfies just don’t look as good as your “someoneelsies?”

Are you in search of a phone that takes great selfies, doesn’t skimp (much) on specs, and is waterproof so you don’t have to worry about dropping it in a puddle while snapping a photo of your Cronut during your morning commute?

Then HTC’s Desire Eye is undoubtedly the phone for you. Its dual 13-megapixel (front- and rear-facing) cameras take very good photos, and both include dual-LED flash for better shots in the dark.

But beyond the device’s versatile image-taking abilities, it’s also a great mid-range phone, with specs that would have been considered top-of-the line just six months ago.

The Desire Eye makes me wish HTC designed every phone. The mostly metal HTC One and the HTC One M8 look and feel great. And while the Desire Eye’s plastic shell sounds like a big step down, it’s really not.

Rather than opt for the glossy plastic of a typical Samsung or LG phone, HTC went with matte plastic that comes in either white with red edges (the version I tested) or dark blue with light-blue edges.

HTC also managed to make the phone water-resistant up to 1 meter for 30 minutes, despite the fact that it has an exposed Micro USB port. This is much better than the annoying cover flaps that Sony and Samsung use on their water-resistant phones.

The Desire Eye makes me wish HTC designed every phone.

The SIM card and MicroSD cards on the Desire Eye’s left edge are also housed in removable trays, rather than hidden behind flaps. In case it isn’t clear, I like the Desire Eye’s design a lot. Hopefully it will usher in an era of waterproof phones without fiddly doors. Because most of us just end up breaking those off and losing them — or at least I always do.

The Desire Eye’s 5.2-inch 1080p screen isn’t impressive by superphone standards, but it’s high-res for a mid-range phone, and both brightness and viewing angles are good. Like the M8, the Desire Eye also has front-facing speakers. They’re reduced to small slits here, on the top and bottom of the screen (in portrait orientation). They don’t get as loud or have as much low-end punch as the speakers on the M8. But they definitely sound better when watching a YouTube clip than the single speaker found on the back of Samsung’s Galaxy Note 4.

The Desire Eye runs the last version of Android before Lollipop (4.4.4 KitKat) on top of HTC’s Sense 6.0 skin. This means the Flipboard-like BlinkFeed lives to the left of the home screen, extra home screens are found to the right, and the full app drawer scrolls vertically, rather than horizontally. Overall, Sense still feels a little strange to use if you aren’t coming from a previous HTC Android phone. But the design and layout looks less cartoony and feels less bloated than Samsung’s TouchWiz skin. And as always, if you don’t like Sense, it’s easy enough to grab a different launcher from Google Play and make most of it disappear.

The Desire Eye is, for now at least, an AT&T exclusive, and the phone comes with a collection of about 25 pre-installed extra apps, including several of the carrier-branded variety, as well as Beats Music, WildTangent games, the Yellow Pages app, and Uber. Many of these can’t be easily uninstalled, just disabled. Still, the app clutter here doesn’t seem nearly as bad as on several recent Sprint phones I’ve tested. And while the phone’s 16GB of internal storage isn’t roomy, at least there’s that MicroSD card slot for file storage.

Not quite a superphone

The 2.3GHz Qualcomm Snapdragon 801 chip and 2GB of RAM in the Desire Eye aren’t a match for the Snapdragon 805 in some newer, pricier smartphones. But these specs are in line with the company’s One M8, which debuted as a flagship earlier this spring.

Everything we ran on the Desire Eye felt snappy and responsive. And not that we put much stock in mobile benchmarks, but for comparison, the Desire Eye’s Quadrant score of 23,802 and 3DMark Ice Storm Unlimited score of 18,113 was roughly in line with the One M8, which did a little worse on Quadrant (22,700), and a bit better in 3DMark (20,600). Samsung’s Note 4 did slightly worse on Quadrant, scoring 23,541. But in 3DMark, the Note 4, with its extra gigabyte of RAM, scored 21,061. Again, benchmarks on mobile devices are often inflated. But the Desire Eye seems to compare well against phones that cost much more, and we didn’t notice any slowdowns or lag when testing.

Attractive photos, as long as the light is good

Both of the Desire Eye’s 13-megapixel cameras are fantastic — for a mid-range phone. In good light, they produce vivid photos with plenty of detail. And both the front and back shooters are supplemented by dual-LED flash, which helps when taking photos in the dark.

The latter feature is key because the cameras aren’t great at low-light photos. Compared to photos taken in the same lighting conditions with the Galaxy Note 4, the Desire Eye’s images were darker, less detailed, and noisier. So while it’s easy to say the front-facing camera, with its 13-megapixel sensor and dual-flash, is the best I’ve seen on a smartphone (or any mobile device, really), the rear camera isn’t as nice as those found in recent Samsung flagships and the iPhone 6. Camera focus is very quick, though, as evidenced by the photo I took of pigeons in mid-flight, which I took while walking through a feeding flock.

Considering this is a mid-range phone, image quality is still pretty good. Just remember to turn on the flash when the lights get dim. Otherwise, you won’t likely be pleased with the results.

Battery life is where the Desire Eye winds up feeling the most like a mid-range phone. The device’s non-removable 2,400mAh battery is smaller than the one found in the One M8. And given the Desire Eye has similar specs and a slightly larger screen, I didn’t have high hopes for its longevity.

If you’re making it a late night, you’ll want to top off in the afternoon.

Indeed, the phone doesn’t have the stamina of more expensive phones like the M8 or the Samsung Galaxy S5. If you aren’t a heavy phone user, you should still be able to get through a day without recharging. But if you’re making it a late night, you’ll want to top off in the afternoon.

After 10 hours of intermittent, but sometimes heavy use, downloading and installing apps, running benchmarks, taking photos, and playing a few rounds of Plants vs. Zombies 2, battery life was below 30 percent. If your days last longer than about 14 hours, you’re probably going to need to recharge at some point, unless you make heavy use of HTC’s robust battery saving modes.

If it’s a selfie-centric smartphone you’re after, HTC’s Desire Eye is an easy choice, unless you’re willing to import Oppo’s N3, with its motorized, swiveling 16-megapixel camera when it arrives, reportedly in December, for $650.

But even if you don’t care that much about selfies, the Desire Eye is a fine mid-range phone with plenty to like, including nearly top-notch specs, an attractive, though slippery, water-resistant shell, and cameras that, while they aren’t the best you’ll find in a smartphone (the iPhone 6 and the Note 4 take better low-light photos), are still great for a phone that costs $150 with a two-year contract, or $550 without a new agreement.