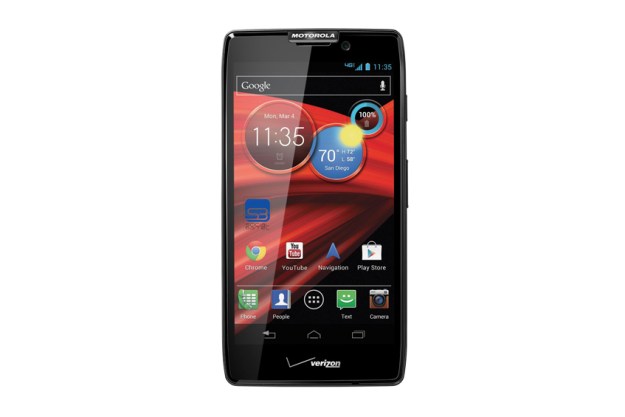 “At $300 on contract, the Motorola Droid Razr Maxx HD is on the expensive end of the smartphone spectrum. Is the extra battery life worth the extra $100? If you value battery life, the answer is yes.”

The last and best of the new generation of Motorola Droid phones is finally here: the Droid Razr Maxx HD. This Android smartphone is almost identical to the Razr HD. It’s a tiny bit thicker, a hair heavier, and $100 more expensive. What do you get for that extra Benjamin? Battery life that you can, supposedly, measure in days, not hours. Is the bump in juice worth that extra money? Read on to find out.

The most impressive thing about the Droid Razr Maxx HD design-wise is how thin and light it is. It’s just 0.37 inches thick with a 5.2 x 2.7-inch footprint and weighs only 5.6 ounces. That’s barely thicker than the Razr HD (0.33 inches), which you’ll only notice by careful examination of the two side-by-side. The weight difference is also negligible, meaning the Razr Maxx HD feels just like the Razr HD, which we judged to be quite holdable.

Also impressive is that it’s almost the same size as the previous generation Maxx, yet has a larger 4.7-inch display. More screen without more bulk? Sign us up.

To achieve this slimness, Motorola opted for a sealed-in battery design – a la the iPhone. This means users cannot replace the battery. This won’t pose an issue for most users, but will make it impossible to replace the battery, should it go bad.

The rubberized coating on the back, which wraps around the bottom edges, makes for a good and secure grip; this phone won’t slip from your hands easily. The top edges aren’t as rounded, giving the Razr Maxx HD a precision look. Nice touches like the rough surface on the power button and the placement of it and the volume rocker on the top right edge show that Motorola is paying attention to the details that make for comfortable design.

The headphone jack sits up top and the Micro USB and Micro HDMI ports are on the left edge near the bottom. Just above them is a door for the microSD and SIM card slots. It sits flush with the edge and requires a special tool (included) to open.

We like that the camera is flush on the back, which helps protect the lens from scratching. A small speaker sits to the right of the camera and delivers good volume and decent audio quality for alarms and speaker calls.

The Razr Maxx may not qualify as “rugged,” but it should prove to be a tough phone to mess up. The back plate is made from Kevlar; a metal band reinforces the sides; Gorilla Glass protects the front; and the device is coated with water-repellent to protect it from minor splashes. The Kevlar backing may be more of a gimmick than a useful design inclusion (it won’t stop a bullet!), but could prove necessary for people who carry their phones in their back pockets – few phones can survive a sitting.

Despite Motorola now belonging to Google, the Droid Razr Maxx HD is launching with Android 4.0 instead of the newer version 4.1 (Jelly Bean), though the company promises that Jelly Bean is on the way. At least with this phone you get an un-messed with version of the operating system and no MotoBlur – and much-despised skin that Motorola was infamous for forcing on users over the last few years.

The same things we liked about the interface on the Razr HD we like here in that the Razr Maxx keeps things simple. There’s only one widget pre-loaded, called Circles, and it’s a nice little information area that offers the time, weather, and battery level at a glance plus a few other bits of info if you swipe it. Off to the left of the main Home screen is a quick settings area that gives easy access to Wi-Fi, Bluetooth, GPS, and Airplane Mode on/off toggles and other oft-needed functions.

The default on-screen keyboard is an improvement over some recent Motorola offerings. Whether typing with one hand or two, we found the keyboard accurate and the auto-correct function very helpful. It even makes suggestions for the next word before you start typing, similar to SwiftKey. The overall functionality isn’t as good or robust as SwiftKey, but it’s definitely a step in the right direction. Motorola also pre-loads Swype as an option.
There aren’t a ton of pre-loaded apps to contend with on the Razr Maxx HD. Aside from Verizon’s offerings — which can be useful, especially My Verizon Mobile and the data usage widget — there are a few games plus media and productivity apps. Motorola’s “Smart Actions” is among the most useful, as it makes scheduling daily functions and tasks easy and even makes suggestions based on how you use the phone. We also like the Favorites section of the App drawer where you can drag the apps they use most.

The Droid Razr Maxx HD runs on the same 1.5GHz Qualcomm Snapdragon S4 processor that’s inside the Razr HD, Razr M, and the Galaxy S3. It’s backed by 1GB of RAM and 16GB of internal storage and has a Micro USB port for charging and connection, Micro HDMI, and microSD ports, plus a headphone jack. NFC, DLNA, Wi-Fi, Bluetooth 4.0, GPS, and 4G LTE connectivity over Verizon’s network are also included.

Outdoor visibility is no problem, just leave brightness set to auto and it will adjust up even in bright sunlight. And thanks to the big battery, you don’t have to turn the brightness down indoors to save juice.

Since the Droid Razr Maxx HD is just the Razr HD with a larger battery, it is unsurprising that it scored about the same on the Quadrant benchmark (4,920). It’s not as high as the Galaxy S3’s 5,000+ score, but the difference is negligible. Our hands-on performance tests offered the same result. When watching video and playing games like Temple Run, Grabatron, and Modern Combat 3, we saw smooth gameplay and frame rates.

Internet connectivity proved fast both when connected to the Verizon Wireless 4G LTE network (average 19.6Mbps down and 17.2Mbps up) and Wi-Fi.

The justification for the Razr Maxx HD’s extra $100 price bump over the Razr HD is the bigger battery. That massive 3,330mAh battery may not add much thickness or weight, but don’t let that fool you.

To test it, we left screen brightness on auto and turned on the GPS and Wi-Fi radios, so the phone was forced to connect to 4G LTE service the entire time – a battery drainer. With medium usage that included playing games and videos, taking pictures, apps downloading data in the background, and other normal tasks, the Maxx HD lasted for 2 days, 11 hours, and 38 minutes. We decided to charge it when the battery got down to 1 percent. During this time we never plugged the phone in or turned it off. With the screen off in sleep mode the Razr Maxx used very little battery.

In our next test we set the screen at 100 percent brightness, added Bluetooth radio, and used the handset heavily for a day, which included even more video watching, game playing, and leaving the screen on and active. This time the Maxx HD made it 12 hours and 31 minutes before getting down to 1 percent.

Most users won’t leave every radio on, are more conservative about display brightness, and will connect to a Wi-Fi network at some point. Under those circumstances, the Droid Razr Maxx HD’s battery can last for days, even with heavy usage

This is a big improvement over the Razr HD’s battery, which would last all day if you tweaked it correctly. It’s also greater longevity than the Galaxy S3 offers.

The 8-megapixel camera on the rear of the Razr HD isn’t as impressive as the HTC One X or the iPhone 5. The Galaxy S3 is better as well, though not by as wide a margin. In good lighting, the shutter proved speedy. In darker scenarios it took a while for the camera to focus correctly, and the resulting shots are only okay. The flash on the back helps a little, but sometimes results in blown-out subjects.

The rear camera’s usefulness is hindered a bit by Motorola’s custom camera app. It’s a step up from the stock Android app, but does lack a few key settings options, like white balance. We do like that the app will suggest settings when it detects certain shooting conditions.

Like HTC and Samsung, Motorola now includes the ability to take pictures while shooting video. Other advanced features include panorama shots, scene mode, and filters. While there’s no dedicated hardware shutter button, users can use the volume toggle for this function or use it to zoom.

The front-facing 1.3MP camera does all right outside, but when taking pictures or facilitating video chat in low light, the results are very pixilated and grainy.

Call quality is above average for smartphones, which don’t usually wow us. Callers reported hearing us very clearly even with low to medium amounts of background noise. The earpiece delivered loud, clear audio as well.

At $300 on contract, the Motorola Droid Razr Maxx HD is on the expensive end of the smartphone spectrum. Is the extra battery life worth the extra $100? If you value battery life, the answer is yes. If you don’t mind tweaking some settings or using SmartActions to get the most out of your battery, then the Droid Razr HD is a more budget-friendly choice. Either way, you’re getting a good phone.

Just remember that smartphone prices are bound to fluctuate. And with the holidays coming up, the Razr Maxx HD may end up discounted down $50, $100, or more. In that instance, snap it up and don’t look back. Between the good performance, beautiful screen, comfortable design and longer battery life, the Maxx HD is the best Droid and one of the best smartphones available right now.