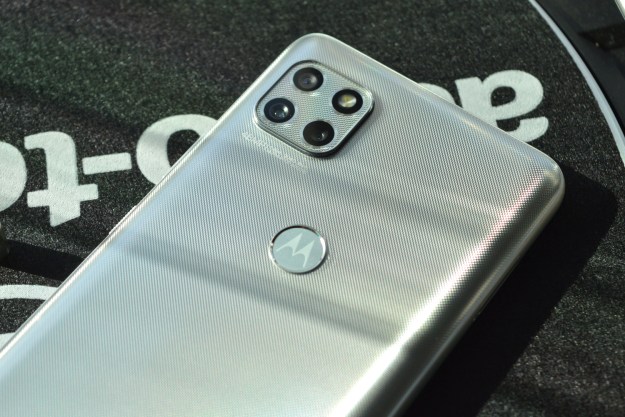 Motorola One 5G Ace review: Good at most things, great at nothing
MSRP $400.00
Score Details

“You get good performance, great battery life, and a nice big display. But subpar cameras and a short software life span hurt the One 5G Ace.”

Motorola recently unveiled the 2021 Moto G series, which offers solid value for those who don’t want to spend more than $250. But alongside the Moto G, the company also launched a new model in its higher-end One line: The Motorola One 5G Ace.

At first glance, the Motorola One 5G Ace is a bit of a confusing launch (and an awkward name), but it’s important not to think of it as a replacement to last year’s Motorola One 5G. This device has a lower-end processor, a worse display, and other cutbacks — but it also comes in at $400, or $150 cheaper than the standard Motorola One 5G.

There’s no shortage of competition at this price range, though. With the Pixel 4a and iPhone SE among its rivals, does the Motorola One 5G Ace compete? We put it to the test to find out.

Motorola has done well offering relatively modern-looking phones for the price, and the One 5G Ace is no exception to that rule. It’s a tall phone, with a large 6.7-inch display at a 20:9 aspect ratio, and that makes it great for scrolling through Twitter, seeing all your emails at a glance, and simply being able to see more at any time. Of course, there’s a trade-off: Don’t expect to be able to reach the top of the display without the help of a second hand.

While the original One 5G had a dual front-facing camera, the Ace has a centered single cutout for the selfie cam. And, there’s a small chin at the bottom of the display, though it’s not too intrusive, and you likely won’t notice it at all in day-to-day use.

At first glance, the back of the phone looks metallic, but you won’t be fooled for long. It feels like plastic. Now, that’s not a huge deal for the price — it’s not as premium-feeling as a glass or metal device, and its weightiness helps make it feel solid. Plastic will help make the phone more durable to typical bumps and scrapes, which is usually a solid selling point for those buying a device on a budget. Also on the back is a fingerprint sensor, which worked relatively quickly and accurately, and a triple-sensor camera module.

Apart from the standard power button, volume rocker, and USB-C port around the edges, you’ll also get a headphone jack. It’s nice that Motorola has stuck with the headphone jack for this long on its budget phones.

The display is a clear step up from the Moto G series, thanks to its higher 1,080p resolution. Unfortunately, you won’t get the 90Hz refresh rate that you get on the standard Motorola One 5G, but it still offers decently vivid colors and gets relatively bright. It’s a good-looking display for a phone in this price range.

Under the hood, the Motorola One 5G Ace is a clear step up from any Moto G device, thanks to its Qualcomm Snapdragon 750G processor, coupled with 4GB or 6GB of RAM and  64GB or 128GB of storage. It’s a solid setup, and the Qualcomm 7-series has really proven itself over the past year as a great way to get good performance without buying a flagship phone.

In day-to-day use, the phone is more than capable. It rarely had any issues, even when used for heavy multitasking, mobile gaming, and more. I have the 6GB RAM model, and I never had any issues with apps closing in the background before I was done with them. It even handled some Call of Duty: Mobile and Asphalt 9: Legends with ease. Sure, load times may be slightly longer than on the Snapdragon 765G-equipped Motorola One 5G, and it may start to slow down sooner, but in normal use, at this point in time, they feel almost identical.

The phone boasts a 5,000mAh battery (yes, the same as a Galaxy S21 Ultra), which is more than enough for a full day of heavy use. While it doesn’t last quite as long as that on the Moto G Power, due to the higher resolution display, most people will still be able to get two days of moderate use from it, which is what Motorola advertises. If you’re good at keeping your phone charged up each day, you’ll have nothing to worry about here. Unfortunately, there’s no wireless charging, which is a little disappointing. It’s still tolerable that a $400 phone wouldn’t offer it, but it won’t be for long — and it would have been nice to see the One 5G Ace be ahead of the curve.

Having 5G on board is a win for a device in this lower price bracket, but soon it won’t be all that remarkable as every phone will come with 5G. How well the One 5G Ace performs on the network will be determined more so by your carrier and 5G coverage, but it’s great to know that when you have access to 5G, your phone will be ready.

As mentioned, the Motorola One 5G Ace has a triple-camera system featuring one 48-megapixel main sensor with an f/1.7 aperture lens, one 8MP ultrawide camera with an f/2.2 aperture, and one 2MP macro camera. I still don’t believe that people really use macro lenses (more than just to review them, anyway), but Motorola begs to differ, arguing that in the era of COVID-19, more people than ever are taking photos of things up close at home. I would have preferred a telephoto to a macro.

The camera on the One 5G Ace is fine, but not much better than fine. In good lighting conditions, it’s able to produce a solid shot, though colors aren’t very vivid, and details aren’t as crisp as they could be.

In low light, images are far worse. There’s little detail to speak of, and a whole lot of noise — if you can actually lock focus and capture a nonblurry image in the first place. Highlights are often way overblown, which is common among low-end phones in low light, so while you’ll be able to tell what you’re taking a photo of most of the time, don’t expect much more than that.

The same is more or less true on the front of the phone. The 16MP front-facing camera can take fine selfies, but nothing that’s going to fool anyone into thinking you have a higher-end phone.

The Motorola One 5G Ace’s main issue in the camera department has more to do with competition than anything else. The fact is that excellent phone cameras are getting cheaper, and that charge is led by Google. The Pixel 4a is $50 less, but offers a camera that’s an order of magnitude better than that of the One 5G Ace. If you’re willing to jump ship to iOS, the iPhone SE has a better camera too — though it’s not as good as the Pixel 4a’s. Lastly, the OnePlus Nord may not have the best camera out there, but it’s still better than the One 5G Ace’s.

Motorola has offered near-stock software on its phones for years now, and the Motorola One 5G Ace is no exception to that rule. The software is stripped-back, easy to navigate, and well-designed.

Motorola’s My UX offers a range of extra features and gestures, too, all of which can be enabled or disabled at will, and all of which can help make using the device more natural. Things like pressing three fingers down to take a screenshot, twisting your wrist to jump to the camera, and more, are all useful.

There are also mobile gaming settings that can be tweaked. My favorite thing about all these features is that they’re all contained in the Moto app, not spread out through Android as other manufacturers tend to do. That means that if you don’t want to use or see them, you can hide the Moto app and essentially use the phone as a stock Android device.

Well, almost a stock Android device. While other stock Android phones, like the Pixel series, get quick updates for at least a few years, the same cannot be said for the Motorola One 5G Ace. It ships with the already-dated Android 10 (Android 11 has been out for months now), and while Motorola has said that it will bring Android 11 to the Ace, it hasn’t said exactly when. And, that’ll likely be it for the phone. Motorola has promised “at least one” operating system update, but I wouldn’t count on more than one — its track record is poor in this department. Thankfully, you’ll get security updates for two years.

It’s really disappointing to see old software paired with a lack of updates. It’s more acceptable on a $150 Moto G Play, but at $400, it’s tough to deal with, and we really hope that Motorola steps up its game in the near future.

The Motorola One 5G Ace is a solid phone. It performs well, has a nice display, and a great battery life. But in 2021, sub-$500 phones still need to go that extra mile — and this one just doesn’t. The Pixel 4a‘s advantages are years of software updates and a flagship-quality camera. The iPhone SE gets flagship-level performance and even longer updates. The Motorola One 5G Ace, on the other hand, is “good” at pretty much everything, but “great” at almost nothing — expect battery.

Of course, we haven’t really mentioned the “5G” aspect of this phone, but there’s not much to talk about there. I would caution against buying this phone for its 5G support — get the Pixel 4a instead, deal with the lack of 5G, and by the time you’re ready for your next phone, getting something that’s 5G-capable will be more important. Alternatively, get the Pixel 4a 5G — which offers an even better camera and improved performance for $60 more.

Yes. If $400 is a hard limit for your budget, you can save $50 and get the excellent Google Pixel 4a. If you can stretch just a little bit, and care about 5G and prefer a large display, then go for the Google Pixel 4a 5G instead.

The Motorola One 5G Ace has a plastic back, so it should survive most drops — but it doesn’t have water resistance, so you’ll want to keep away from anything wet. Given the lack of software updates past Android 11, you may find it dated in terms of features within a few years — but that hardly prevents it from actually working.

No. Go for either the Google Pixel 4a or the Pixel 4a 5G instead.