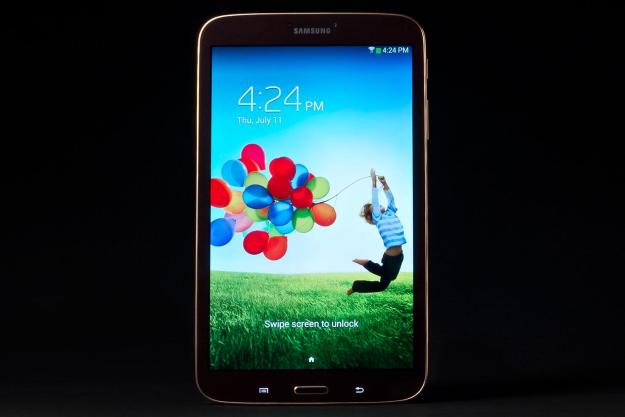 “The Galaxy Tab 3 line family are priced reasonably and offer a great Android tablet experience in every way you'd expect. We prefer the 8-inch model.”

Third time is a charm. Samsung has been playing the tablet game for years now, and it’s finally getting the mix right. There are three new Galaxy Tabs this year: a 7-inch, an 8-inch, and a 10.1-inch. The most promising of the bunch is the $300 Galaxy Tab 3 8.0. The screen size and pricing make it a clear challenger to the $330 iPad Mini and other popular 7-inch tablets like the Google Nexus 7 ($200). Plus, the Tab 3 8.0 is also competing with Samsung’s Galaxy Note 8.0, a similar tablet priced $80 higher.

The difference in price is wide enough for many shoppers to wonder if the Tab 3 is a viable alternative to the Note or worth the $100 premium over a 7-inch tablet. Thanks to a slim, lightweight design, smooth performance, and a beautiful display, the answer for many will be yes.

Unless you’re looking at them side-by-side, the Galaxy Tab 3 8.0 could easily be mistaken for the Galaxy Note 8.0. The design language is the same, down to the physical buttons under the screen, but the Tab 3 is narrower and lighter than the Note because Samsung didn’t have to make room for a S Pen. The difference of a few centimeters and fractions of a pound mean the Tab 3 is just that much easier to wrap a hand around. Like the Galaxy S4, the Tab 3’s edges curve up slightly for a comfortable fit in the palm. The flat, chrome band that circles the edge doesn’t mess up that comfort and it makes it easy to find and press the power button and volume toggle on the side.

With this generation, Samsung finally dropped its proprietary connectors in favor of a Micro USB port for connection and charging. It’s MHL-enabled, so the slate doesn’t lose the ability to output to an HDTV and it should also connect just fine to USB peripherals like keyboards and mice.

We’re glad that Samsung offers the Tab 3 in a color other than white. The Gold Brown option is much better looking even if it does show smudges more readily.

Seven inches is the established “small” size for Android tablets, yet now that 8-inch slates are here we much prefer the larger size. That extra inch of screen real estate doesn’t add much bulk or weight, so the balance between size and portability remains good. The Tab 3’s 1280 x 800 pixel resolution is crisp enough to make reading comfortable and we enjoyed watching video on the bright display thanks to its vivid colors and deep blacks. Wide viewing angles mean you won’t have to hold it in an exact sweet spot for the best experience and playing games that utilize the accelerometer won’t get ruined by occluded views and distorted colors.

Thanks to a slim, lightweight design, smooth performance, and a beautiful display, the 8-inch tablet is worth its $300 price.

The two speakers on the bottom edge pump sound loud enough to be heard over medium to loud background noise. The problem is, when holding the tablet in landscape mode our hands covered them. Speaker audio quality is average for a tablet – tinny though not completely unpleasant. Output via headphones and Bluetooth is good enough for non-audiophiles.

This size tablet is more likely to leave home than the 9-10 inch models, but will probably still be a couch companion during TV time. Samsung all but assures this with the inclusion of the WatchOn app coupled with the infrared port on the side. Together they turn the tablet into a universal remote with a smart channel guide that learns what you like as you watch.

Like the Galaxy S4, the Galaxy Tab 3 8.0 utilizes hardware Home, Back, and Menu buttons even though it runs Android 4.2 Jelly Bean. Also like the S4, the buttons are multi-functional, which justifies their presence. Hardware buttons are nice to have when the OS goes wonky, but Android purists will likely turn up their noses. This is one of the most obvious examples of Samsung’s interface tweaks under the TouchWiz skin. If you’ve ever used a Galaxy S3, S4, or Note 2, then the overall look and functionality will be familiar.

As always, we’re not fans of the toyetic look of TouchWiz but we do appreciate many of its enhancements to Android. The toggles in the Notification drawer for Bluetooth, Wi-Fi, Reading Mode, Multi-Window, and more make it easy to access and enable/disable commonly used wireless radios and features. Rich widgets make all that Home screen space more useful by providing rich information at a glance. A few of our favorite pre-loaded apps from the Galaxy S4 family also make an appearance here: GroupPlay, S Voice, S Translator, Story Album, etc.

We’re glad to see the Multiwindow feature on the Tab 3. Once activated, you can use two apps side-by-side on the screen for decent, if not Windows-like, multitasking. Not all apps work with this feature. Those that do aren’t limited to Samsung apps – we noticed that Evernote, Papyrus, GMail, and YouTube also show up as options.

Samsung’s on-screen keyboard deserves some attention for how robust it is. It incorporates functionality developed by SwiftKey for word prediction and Swype-like trace-to-type for faster input. We like that you can split the keyboard into two parts for easier typing in landscape mode and make the keyboard smaller and moveable, so it doesn’t take up such a large portion of the display. Best of all, the handwriting keyboard is available even though the Tab 3 doesn’t come with an S Pen. Using a capacitive stylus didn’t prove a problem; the handwriting recognition engine works almost as well as on the Galaxy Notes.

A major difference between the Tab 3 8.0 and the Note 8.0 that may affect your decision to buy one or the other is internal hardware. Overall, the Tab 3 is less powerful. It sports a 1.5GHz Exynos 4212 dual-core chip backed by 1.5GB of RAM and 16GB of internal storage (expandable by up to 64GB more via microSD card slot). This combination scored 4,861 on the Quadrant benchmark, well above the Kobo Arc (3,000) and the Nexus 7 (3,500). That matches with our hands-on experience. The Tab 3 is smooth and speedy when opening apps, swiping around in the interface, and playing games like Temple Run 2 on high graphics quality.

Wireless radios include b/g/n Wi-Fi, Bluetooth, and GPS. No NFC on board.

The rear 5-megapixel camera is a little above the average tablet camera and gets a significant boost from a good camera app. This is another element that will be familiar to Galaxy S4 owners, because the app has the same layout and much of the same functionality. It has most of the typical scene modes (Sports, Night, Beauty Shot) and none of the really fancy ones like HDR. That’s the right balance for this camera – decent enough to benefit from some fiddling with white balance and exposure, but not good enough to bother with advanced camera tricks. The resulting images have soft edges and only a little noise, just be sure you’re in good lighting. There’s no flash – not that having one would help. The 1.3-megapixel front-facing camera is okay for video chats, just know that your face will come out grainy on the other end.

With medium to heavy on-and-off usage (leaving brightness on Auto), we were able to go two days before needing to charge the Tab 3 8.0. The 4450mAh battery lasted around 5 hours streaming video before getting down under 15 percent with the brightness set to 50 percent. That translates to about 8 or 9 hours of continuous mixed use, a nice chunk of time for a tablet this size. The iPad Mini is still the champion here with its 9 to 10 hour battery life, though the Tab 3 isn’t far behind.

The Galaxy Tab 3 8.0 is yet another strong tablet from Samsung and a great alternative to the Galaxy Note 8.0 if you don’t need the pen capabilities or just can’t afford the $380 price tag. At $300 the Tab 3 is less expensive than the iPad Mini and $100 more than most 7-inch slates. The extra screen size is worth the premium, and the combination of long battery life and great design round out what we think is one of the best 8-inch tablets available.

Video-editing app LumaFusion to get a Galaxy Tab S8 launch
First Samsung Galaxy S23 design leak shows a floating camera bump
Samsung just copy-and-pasted iOS 16’s lock screen in its One UI 5 beta
These 80+ apps could be running adware on your iPhone or Android device
Can’t stand using Instagram in 2022? This app fixes everything you hate about it
Best Apple deals and sales for September 2022
Make your fortune with the best stock-trading apps for iOS and Android
Best smartwatch deals for September 2022
The best Samsung Galaxy Tab S8 keyboard cases
Apple AirPods Pro 2 vs. Samsung Galaxy Buds 2 Pro
How to add multiple wallpapers and change your home screen on iOS 16
The best touchscreen laptops for 2022
Which $1,000 phone has the better camera — iPhone 14 Pro or Galaxy Z Flip 4?