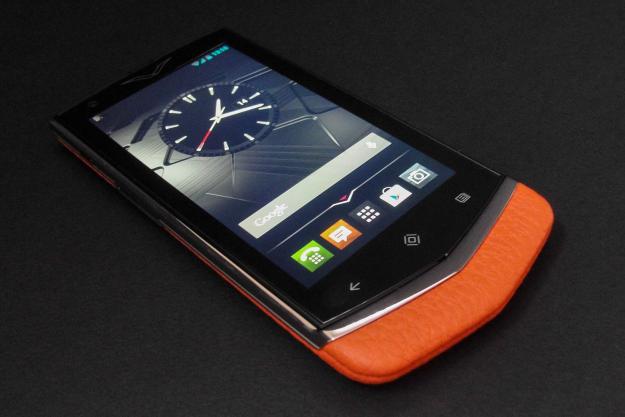 “The Constellation is half the price of the Vertu TI and is a much better phone, but at $5700 it lacks the crazy Concierge service and flash that some might expect in a luxury device.”

Cheaper is sometimes best, but almost never when it comes to luxury goods. Luxury is defined by price. You won’t find a prestigious luxury hotel at a low price, nor will you find a ‘luxury’ Hyundai that matches the price of a BMW and Mercedes-Benz. The Vertu Constellation is the second Android phone to come from the British luxury smartphone maker this year, and it’s half the price of its counterpart, the Vertu TI.

I like Vertu as a company, and I’m a fan of it first Android phone, the Vertu TI, having spent an enjoyable weekend with it earlier this year. The TI is an unashamed luxury product. Bold and expensive, it’s impossible to ignore. The Constellation on the other hand, is a conundrum. It’s more powerful than the TI, has a nicer screen, features a more contemporary design that appeals to more people, and is still hand built with high-end materials synonymous with the Vertu name like sapphire and titanium. The problem is that it’s cheaper than the TI by a considerable amount. Granted, in any other context, 4,200 euros ($5740) for a phone is not cheap, but when you compare it to the 7900 euro ($10,700) TI, it’s bargain bin.

So why is it a conundrum? Because I vastly prefer the cheaper model over the expensive one, mostly because it’s nowhere near as insane looking. Surely this is all wrong? Vertu makes luxury phones, and as we’ve established, that should mean the more expensive and flashy it is, the better. But it’s not the case here; at least, not for me, and that makes the Constellation fascinating.

We’ll get to why in a moment, but first let’s talk about feelings. Don’t worry, I’m not about to bleed my heart out like we’re in therapy session. I’m talking about the feeling you get when you own something really special. Top Gear’s James May describes a, “Fizzing” at the base of his spine when he drives a really exciting car, and that’s close to what the TI gave me when I flashed it around while pretending to be a rich guy. After it went back to Vertu, I missed that fizz.

The Constellation feels grown-up, sensible, and more equipped to deal with a real person’s everyday life.

During my time with the Constellation, I never fizzed once. The excitement disappeared because the Constellation feels grown-up, sensible, and more equipped to deal with a real person’s everyday life. It’s as if Vertu has come of age with a cheaper, less visually dramatic phone.

The TI is like Vertu at age 18, full of bravado and garnished with “Look at me” visual flair, while the Constellation is Vertu age 30. Much of the maturity comes from the design. While it’s still clearly a Vertu phone, the overall shape of the Constellation is more familiar, primarily thanks to slim profile and larger screen. The display measures 4.3-inches, but it’s mounted beneath a 5.1-inch slice of sapphire – the largest piece of sapphire crystal used on a mobile device yet. Sapphire is still so rare that it takes six months for Vertu to receive sapphire panels after ordering.

But it’s a much better phone

Vertu has upped the screen resolution to 720p, and the processor is a dual-core 1.7GHz Snapdragon chip. The 13-megapixel camera on the back of the phone is encased in the same chromed plate as the TI, which also houses the brilliant speaker. It’s loud and amazingly clear, shipping with specially recorded – by the London Symphony Orchestra, no less – ringtones and other audio clips sound fantastic.

It runs Android 4.2 Jelly Bean, which is a huge improvement over Android 4.0 on the TI. Google Now is in place for a start, and the whole phone feels snappy and alive. It wasn’t without its troubles though. Chrome crashed and rebooted the phone on my first day of use. Vertu hasn’t fiddled with Android much, adding only its own apps and services. For the most part, it’s left the UI alone. There are a few cool touches, my favorite being the way a Vertu V shape slides in and darken the display when you close the screen, then seals it closed with a tiny red heart as it goes dark. It’s beautiful; I watched it every time.

The Constellation’s chassis is made from super tough grade 5 titanium, and the entire rear panel and the base of the phone is wrapped in leather sourced from a tannery in the Alps. There are five colors available – Cappuccino, Black, Mocha, Raspberry, and Orange, which you see pictured here. When I first saw the Constellation, the orange definitely stood out. I wasn’t sure I liked it, and told the Vertu representatives that it may grow on me. I was then sent an orange model with a note reminding me of my words. I’m still not sure about the color, but the leather used is absolutely gorgeous.

The phone also comes with a slip case made from the same material, and it started out stiff as a board, only to become supple and pliant after two days use. Annoyingly though, the cut out for the Vertu symbol on top of the phone doesn’t show the notification light, an odd omission for a company so dedicated to getting things just right. The sleep/wake key on the side of the phone is also hard to find because it’s small and completely flush with the edge of the phone. And on the subject of things that could be better, the camera could do with some image stabilization. Getting a steady shot was difficult in low light. On a more positive note, I liked that Vertu supplies both a Mini and Micro SIM card tray, aiding the transition from another device.

At half price, it’s still 10x more expensive than most phones

Vertu reps told me they want the Constellation to bring them new, younger customers, probably one’s who have never owned a Vertu before. The slick design, paired with the removal of the physical Android Navigation buttons below the screen (one of my least favorite things about the TI) helps give the Constellation a subtle and attractive look. The phone itself performs in the same way as any other mid to high-end Android smartphone in terms of ability and performance.

I can’t help but think if it were closer to $1000, it would find a far wider audience.

However, I can’t shake off the feeling the Constellation will end up being the phone for the “other half.” The TI is absolutely a man’s phone, while the Constellation’s sleek looks and bright leather covers will inevitably make it more attractive to women and fashionistas. It doesn’t come with Vertu’s Concierge service as standard either, which takes away some of the business focus and flash. Who wouldn’t want to be able to order a servant to come fluff your pillow at the push of a button. I mean, what’s another five grand when you’re already spending thousands on a phone? If it were me, I’d put the TI down and buy a pair of Constellations, but that flashiness may be what people want in a luxury phone (if they want luxury phones at all).

Vertu makes expensive phones, and although this isn’t the most expensive in the range, it’s still damn pricey to anyone, and frustratingly expensive to people like me. The phone is so much closer to what one would think of as a “normal” smartphone than the TI, yet unusual enough to standout. I could see myself owning it, but at $5740 (4200 euros) I still couldn’t possibly hope to afford the Constellation. In the time I had with the phone, I used its GPS to find a car dealer with a friend, and we chuckled about how the Constellation cost nearly twice his budget for a car, but the laughs quickly turned into disbelief the more we thought about it.

The Constellation vaguely looks like a smartphone I could afford, which is new for Vertu. The TI always felt like a phone for … someone else. So, we’re back to it being a conundrum. I wouldn’t want to change anything about it just so it would fall into my price bracket, but when phones that cost close to $1000 are shockingly common these days – the Galaxy Note 3 and the 64GB iPhone 5S for example – I can’t help but think if it were closer to that figure, it would find a far wider audience. It’s Catch 22. I wouldn’t change anything, but I wish it were cheaper. I have a feeling we’ve all said that about a car, a watch, a holiday or something else we’d love, but just can’t afford?

Video-editing app LumaFusion to get a Galaxy Tab S8 launch
The iPhone 14’s car crash detection might be a little too good
Samsung Galaxy S23 leak teases a disappointing charging spec
Have a Fitbit? You’ll soon be forced to link a Google account
The iPhone 14 gets a stunning transparent back with this new mod
Best cheap Fitbit deals for September 2022
The Uber hack is an outrageous tale of a teen hacking for fun
The best Samsung Galaxy S22 screen protectors for 2022
LG’s doomed Rollable phone appears on video to show us what we missed
How to transfer your SIM and phone number to an iPhone 14
Amazon’s new Fire HD 8 tablets run faster, last longer, and start at $100
Samsung Galaxy S22 buying guide: everything you need to know
Watch the iPhone 14’s car crash detection get put to the test