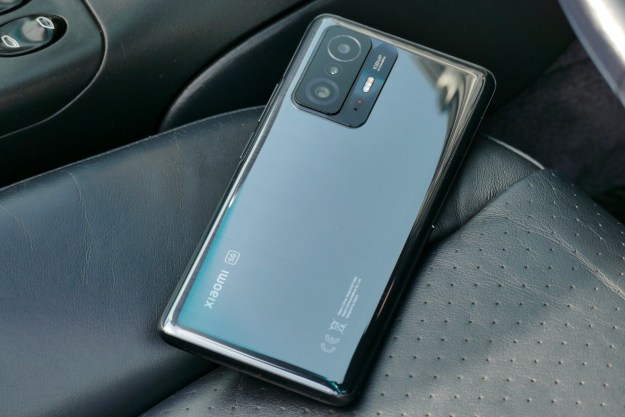 “The Xiaomi 11T Pro isn't an upgrade to the Mi 11, more a sideways step at best, and although it has all the performance you need, it struggles to justify its Pro name everywhere else.”

Pros
Cons
This review definitely isn’t about Mi, as Xiaomi has dropped the “Mi” name from its phones, with the refresh to the six-month-old Xiaomi Mi 11 simply being called the Xiaomi 11T. There are three models in the new range — the 11T, 11T Lite, and 11T Pro — and I’ve been using the top model, the 11T Pro.

You can’t call the 11T Pro a sequel, as it’s not drastically different from the Mi 11. Even worse, there’s nothing here that makes it a Pro phone either, and that causes me to wonder why it exists. Let’s see if there’s a hidden reason.

The Xiaomi 11T Pro weighs 204 grams, measures 8.8mm thick, and has a flat screen and a rear panel that looks like glass covering metal, but feels and sounds more like plastic. The addition of the “T” to the name indicates this isn’t a full sequel to the Mi 11, but a refresh, just like OnePlus once did with its own T models. However, this Pro version doesn’t look as modern as the basic, older Mi 11.

The curved glass over the screen on the Mi 11 may not have had a functional element, but it did give it some character, as did the multistep camera module on the back. For the 11T Pro, that’s all gone. The rear panel has a glossy finish and an attractive brushed metal look, but it gets smudgy and sounds quite hollow. It does provide enough grip to keep it safe in your hands. though. It’s seen here in the Meteorite Gray color, but there are also white and blue versions.

What does it say about the rest of the phone’s design when it’s the power key I like best?

My favorite design element is the power key because it’s very easy to use. It stands proud of the chassis on the right-hand side, but still incorporates the fingerprint sensor. Since the last phone I used was the Nokia XR20, with its practically hidden fingerprint sensor, it’s nice that the 11T Pro’s sensor is easy to locate and ultra-responsive. I have never needed to fall back on any other unlock method while using the 11T Pro.

However, what does it say about the rest of the phone’s design when it’s the power key I like best? It says it’s a bit dull and forgettable. There’s nothing wrong with the 11T Pro’s look, but there’s nothing particularly stylish about it ,either. The 20:9 aspect ratio screen, chunky body, and weight of more than 200 grams doesn’t make it especially pocketable or feel very modern. There’s no IP rating either, which puts it behind most of its competitors and at greater risk from damage.

Covered in Gorilla Glass Victus, the 11T Pro’s screen is a 6.67-inch AMOLED with a 120Hz refresh rate, 1000 nits peak brightness, a 480Hz touch sampling rate, HDR10+ certification, and a 2400 x 1080-pixel resolution. This is a downgrade from the higher-resolution screen on the Mi 11, and it really shows. It’s less vibrant, has a cooler tone, worse contrast levels, and is generally less visually exciting to look at. At best, it’s perhaps a little more natural-looking, but when viewed side by side, your eyes default to the Mi 11.

The screen does not have an adaptive refresh rate, so it’s either set at 60Hz or 120Hz. While the smoothness of 120Hz is always evident when it’s active, it does have an odd tendency to slow scrolling down in some apps and the menu. In Twitter, for example, there is far slower scrolling speed, and the app has a slightly muddy feel to it. This is also evident in areas of the operating system. Switch back to 60Hz, and it goes away. I also found the auto-brightness to be a little oversensitive, dimming the screen when I didn’t want it to.

While not terrible, there’s not much about the screen that makes me think of the 11T Pro as a “Pro” phone, a trend that continues throughout my review.

The main camera has 108-megapixels and is joined by an 8MP wide-angle and a 5MP telemacro camera. The Mi 11 had a higher megapixel wide-angle camera. How has this affected the photo experience? It’s all rather similar to the Mi 11. It takes some great photos, and then some bad ones with oddly muted colors or poor white balance.

The 2x digital zoom shows good detail as it doesn’t get too close, and the main camera can take balanced photos that emphasize natural tones, but because the camera is inconsistent, I often took two or three photos from slightly different angles in the hope one would come out well. The differences between them can sometimes be huge — see the photos of the roof structure in the examples below for evidence — and it doesn’t make me trust the camera much.

The 5MP Super Macro mode is more useful than most due to an autofocus feature, and photos are more attractive and easier to take than on phones with a basic 2MP fixed-focus macro camera. The phone shoots 8K video at 30 frames per second (fps), and there are all the same A.I. video modes from the Mi 11, too. These provide cinematic looks like a super-zoom-in-style shot, a lowlight tracking mode, and a “time freeze” where an object is frozen while everything else continues to move. In practice, these all require very specific situations to shine, and most work best with another person in the shot.

Xiaomi’s addition of an optical zoom is welcome, but its presence isn’t enough to really lift the camera on the 11T Pro over the Mi 11, and the “Pro” name definitely hasn’t been added to highlight any camera improvements.

The Xiaomi 11T Pro is the fastest-charging phone I’ve tested. The dual-cell 5000mAh battery gets its energy from an included 120-watt wired charging block that Xiaomi claims reaches 100% in 17 minutes. I could barely believe the phone had fully charged so quickly the first few times I tried it out, as it maxed the battery in about 20 minutes.

Oddly though, it’s not always so fast. Most days, total charge time was 20 minutes, but on other days, it would edge toward 30 minutes. Still fast, but the variation doesn’t lead to trust in the system, which is important. I’m using a European charging block with an adapter for use in the U.K., which may affect charging speeds.

I haven’t charged the 11T Pro overnight at all because the battery life is good enough for about two working days, or a day-and-a-half of constant use. This means that by using the 120W wired fast charging, I can charge the battery fully first thing when I’m doing something else like showering or making breakfast. There’s no wireless charging, and while I don’t really see this as a major downside, it is a standard feature on many competing phones, and was on the Mi 11, too.

The quick charging is very convenient, cuts down on energy waste, and should help with battery longevity as well. The battery life is better than on the Mi 11, due to a slightly larger battery capacity and improved efficiency from Xiaomi’s MIUI 12.5 software. It’s really the only vaguely Pro aspect of the phone, and even then, it’s a bit of a stretch.

A Qualcomm Snapdragon 888 processor and either 8GB or 12GB of RAM powers the 11T Pro. It boasts dual-SIM 5G connectivity, NFC for Google Pay, Wi-Fi 6, and Bluetooth 5.2. Android 11 with Xiaomi’s MIUI Global 12.5 software is installed.

First, the good stuff. There’s an app tray, a really pretty and highly customizable always-on screen, and new Super Wallpapers that look amazing — they’re fully animated, very fluid, and dynamic, too, as they change their look with the time of the day. The phone has been reliable, I was able to uninstall the majority of the preinstalled apps, and I saw some efficiency improvements through the battery life, too.

On the downside, there are various frustrations that ruin the experience. You select an app drawer during setup, but it still dumps all the apps across multiple home screens for you to clean up. The always-on screens look great, but don’t show app-specific notification icons on all wallpapers, just an unhelpful blanket “you have notifications” icon. The new version of the notification shade uses both sides of the screen — left for notifications, right for quick access controls — which is not ergonomically sound, but luckily you can switch to the traditional side. Dark mode is also problematic and doesn’t always allow apps to display properly.

The Snapdragon 888 is a great performer, and the phone hasn’t missed a beat, with more than enough power to handle video, gaming, photography, and other apps when multitasking with no slowdown. I played Asphalt 9: Legends without a problem, and Genshin Impact as well. Like all Snapdragon 888-powered phones, you won’t have any concerns overplaying the latest games, or having enough performance for almost any task.

The question I asked most often about the Xiaomi 11T Pro is “why does it exist?” It has the same chip as the Mi 11, an almost identical camera, and a lower-spec screen, but a slightly larger battery and faster charging. I don’t think it’s as good-looking as the Mi 11, and when you hold the two at the same time, the Mi 11 feels like the superior, more expensive device. The final conundrum comes with the name, as not only does it not surpass the standard Mi 11 to earn its Pro title, but I could find nothing that technically made it “Pro” at all.

Certainly, if you own the Mi 11, there’s absolutely no need to upgrade. The worse news (for Xiaomi) is, because it’s not a reasonable upgrade over the Mi 11, which only launched in February, there are quite a few strong alternatives from the competition available. The Snapdragon 888 may make the 11T Pro appear to be a flagship phone, but unfortunately, it’s surrounded by midrange tech that’s not always very well optimized, and that doesn’t do the chip or the Pro name justice.

Yes. We recommend the Samsung Galaxy A52 5G for a great blend of affordable price, capable camera, great screen, and useful feature additions like water resistance and 5G connectivity. Alternatively, take a look at the OnePlus Nord 2, the Google Pixel 5a, or the Realme GT. If you have more to spend, the OnePlus 9 Pro continues to be a great buy.

You will get two years of use with ease, but by that time, it may be ripe for replacement. There’s no water resistance here, so you’ll have to be careful with the phone, but a transparent TPU case is included in the box to help keep it safe. There’s 5G to keep the phone at the cutting-edge of connectivity for a while, plus there are no concerns over performance due to the top-of-the-range processor. Xiaomi does send software updates through regularly, but they mostly apply to MIUI, and although the phone will receive Android updates for three years, you will have to wait longer for Android 12 than with a phone like the Google Pixel 5a.

No. It’s not an upgrade over the Mi 11, and can’t compete with many other reasonably priced smartphones.

Nvidia cuts GPU orders, but does this mean prices will drop?