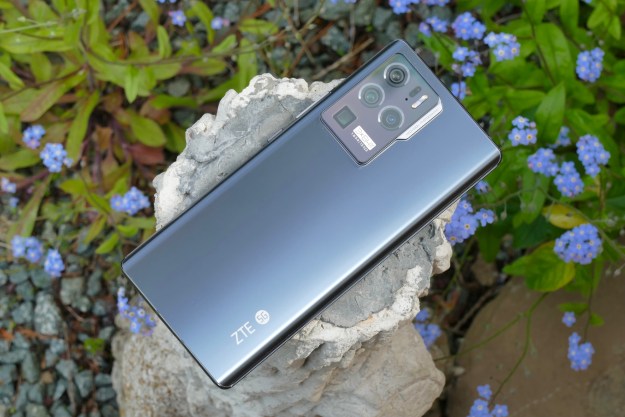 It has been years since I used a ZTE phone, so when I was offered the chance to review the new ZTE Axon 30 Ultra 5G, I  approached it with excitement. Why has ZTE been absent recently? Several years ago ZTE faced the wrath of the U.S. government when it was found guilty of violating sanctions against Iran, and suffered under the same restrictions as Huawei does today. The ban has long since lifted and ZTE has slowly started releasing phones in the U.S. again.

I was a little concerned by how all this turbulence would affect the phone. What would it be like? I put my SIM in with the thought that it may come out again after a few days. Now, coming up to two weeks later, it’s still in there, and it’s proof ZTE has got more than just the $749 price right on the Axon 30 Ultra.

Made from aluminum and glass, the ZTE Axon 30 Ultra 5G has that familiar shape seen on many high-end phones over the last few years. The edges taper to a sharp point, the screen curves down with it, and the flat glass rear panel has a matte finish and a massive camera module. While there’s nothing new in the design, it’s still good-looking, and at 188 grams (6.6 ounces) it’s nowhere near as heavy as some large phones.

Yes, the Axon 30 Ultra is big. The screen is a 6.67-inch AMOLED with an adaptive refresh rate of up to a maximum of 144Hz, and it’s hard to stretch your thumb from one side to the other, but the screen’s performance is very good. It’s perhaps not quite as eye-popping as the Galaxy S21 Ultra on the default settings, lacking some of the contrast and saturation of the screen on the Samsung phone, but tweak the setting and it comes alive. Sadly, the speakers don’t quite keep up with the display, and are tinny and can distort at high volumes, while the adjustment isn’t fine enough at low volumes.

The phone is a little top-heavy due to the many cameras inside the module on the back, and I did find it a little fatiguing to hold in portrait orientation after a while, much like the Galaxy S21 Ultra. The sharp sides increase this, and I found myself sometimes reaching for the smaller, more comfortable to hold iPhone 12 Pro when I expected to browse for longer than a few minutes. However, all this is life with a massive phone, and if you want an expansive screen you have to accept the obvious downside in that it lives inside a large body.

There are three 64-megapixel cameras and a single 8MP camera on the back of the Axon 30 Ultra. The 64MP cameras cover the standard, wide-angle, and ultra-wide camera, while the 8MP is a 5x optical zoom periscope camera. The phone has optical image stabilization, phase detection autofocus, laser autofocus, and HDR10 and electronic image stabilization for video, where resolution can reach 8K at 30 frames per second or 4K at 60 or 30 fps.

The cameras take good photos, but it’s all very inconsistent. Often you’ll take a photo you’re really happy with, like the one I took of the bee on a flower. It’s pin-sharp, colorful, and full of detail. The photo of the black and white Mini Countryman shows good white balance and plenty of atmosphere. Then you’ll take photos that don’t look any good at all, such as the wide-angle shot of the black Jaguar car, which obscures detail with shadow compared with the standard shot, and has too much edge distortion. Other times, photos can be over-saturated, like the picture of the pink flowers.

There’s certainly no evidence of Oppo Find X3 Pro levels of consistency here, despite the multiple 64MP cameras. However, in most normal conditions the primary camera takes good photos, the portrait mode is effective, and the periscope zoom provides a good level of detail and a welcome amount of versatility. The Axon 30 Ultra has had one software update since I started using it, and more may arrive to improve the camera’s consistency over time.

When the Axon 30 Ultra was announced, ZTE talked about a special feature that utilizes all four cameras at the same time. The description was ambiguous at the time, and it turns out not to be of much use. The feature, called Multi Camera, shows a preview of all cameras using a picture-in-picture view. You can tap each preview to switch it out to the main view, but the camera still takes just one photo at a time. I couldn’t find a time when I actually wanted to use it.

While it can’t match the camera on the Google Pixel 5, the OnePlus 9 Pro, or the Samsung Galaxy S21+, the ZTE Axon 30 Ultra’s camera still takes good photos in the right conditions, especially for the price.

With the Qualcomm Snapdragon 888 5G processor and 8GB of RAM, this is a flagship phone providing flagship phone performance. Playing Asphalt 9: Legends is no issue, browsing the web, playing videos, and multi-tasking through message apps, Twitter, and streaming to Chromecast didn’t worry the Axon 30 Ultra either. The Snapdragon 888 provides so much power, it’s hard to imagine at what point it would start to struggle. I certainly haven’t found that point in my time with the Axon 30 Ultra.

The 4,600mAh battery has more than enough guts to keep everything going too, plus there’s a 65W fast charger in the box for emergencies. However, with modest use, the phone will easily last a couple of days or longer on a single charge. Even with heavy use, it hasn’t dipped below 40% in a day with the auto screen refresh rate active.

I expected the software to be the reason I would take my SIM out of the Axon 30 Ultra, and although it’s not perfect, it’s far better than I thought it was going to be. It’s Android 11 with ZTE’s MyOS 11 user interface over the top, but changes to Android’s basic look are minimal.

The ZTE Axon 30 Ultra is a very pleasant surprise

The quick settings in the notification shade have been redesigned, there are some different icon shapes and varying colors, but that’s about all. There are a few games and apps pre-installed, but nothing that you wouldn’t find elsewhere. It’s fast and smooth, has never become too annoying, and hasn’t suffered from unreliability.

However, there are a few problems. Notification support is patchy, with some messages not arriving until I unlocked the phone, and odd bugs like the camera shutter sound remaining loud and proud even though I’d turned it off. These things could be solved with a software update though.

The 8GB/128GB ZTE Axon 30 Ultra is available to buy from ZTE now for $750, or 650 British pounds in the U.K. A version with 12GB of RAM and 256GB storage costs $850 or 750 pounds, but we’d suggest getting the cheaper one as it represents better value. One thing worth noting is ZTE USA confirmed that despite the 5G modem, the phone only has one 5G carrier band that connects to T-Mobile, and none for AT&T. It’ll work fine on 4G LTE across both though.

The ZTE Axon 30 Ultra is a very pleasant surprise. The phone has desirable specifications, a mostly decent camera, long battery life, and a reasonable price. It’s easy to live with on a daily basis, provided you forgive its software flaws and inconsistent camera performance, which is easy to do because it doesn’t cost $1,000.

The price does mean you will have to make do without some features that we expect on flagship phones. The Axon 30 Ultra doesn’t have wireless charging, and there’s no IP rating for water resistance either. It’s all highly reminiscent of OnePlus’s pre-OnePlus 8 models — a well-priced phone, with some caveats.

Now OnePlus’s primary phones don’t really occupy that space anymore, and companies like Xiaomi don’t sell their phones in the U.S., there’s definitely room for ZTE and the Axon 30 Ultra. The good news is, if you’re willing to look outside the usual suspects for your next phone, you’ll be pleased you did. Just be aware that if you absolutely want 5G either now or in the future, this isn’t the phone for you.

The ZTE Axon 30 Ultra 5G’s $750 price tag puts it alongside the $699 Google Pixel 5, which has a better camera but a smaller screen, and the $800 Samsung Galaxy S21 and its beautiful screen. Alternatively, the $799 Apple iPhone 12 is excellent, with a great camera, performance, and battery life. Thinking outside the box a little more could take you to the $600 Asus Zenfone 8, which has similar performance and software in a much smaller body, and the $730 OnePlus 9. It’s not as good as the more expensive OnePlus 9 Pro, but it’s still worth considering.

With no water resistance and a glass body, you’ll have to treat the Axon 30 Ultra 5G well if you want it to last. ZTE promises the phone will be updated to Android 12 at the end of this year or in early 2022, but won’t confirm any plans for further updates. On a technical level, the phone will easily last two years, but if your camera requirements or need for 5G change during that time, its shortcomings may become frustrating.

Yes, it has all the key specs you want for a reasonable price, just be aware that if you want 5G in the U.S. it probably won’t deliver.