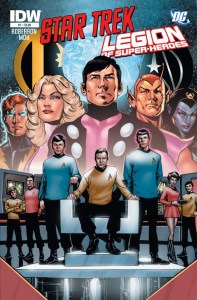 There was no shortage of news coming out of the first full day of Comic-Con in San Diego yesterday, including one particular announcement that seemed like a bizarre example of genre worlds colliding.

Comic book publisher IDW Publishing revealed plans for an upcoming series that will have the cast of characters from the original Star Trek television series teaming up with one of DC Comics’ most popular super-powered ensembles, The Legion of Superheroes.

Yes, that means James T. Kirk, Mr. Spock, and the rest of the crew of the U.S.S. Enterprise sharing an adventure with teenage heroes like Cosmic Boy, Lightning Lad, and Saturn Girl. Feel free to take a few minutes to ponder the implications of that news, then come back for more details.

Kicking off in October, the six-issue comic book series has the two stables of characters meeting when the Star Trek crew attempts to beam down to a planet, but ends up on a different world — and in a completely different universe. The Legion of Superheroes has a similar experience after being thrown off-course during an adventure, and encounter Kirk and his crew in the 23rd Century.

In its official announcement of the series, IDW promised to pit the two casts of characters against a mix of enemies from both their universes, including the Klingons and Borg from the Star Trek universe.

The series will be written celebrated comics scribe Chris Roberson (iZombie), with interior art by Jeffrey and Philip Moy. IDW also provided an image of the first cover for the series, featuring an illustration by Phil Jimenez.

Topics
The best Batman movies and shows on HBO Max
Everything announced at New York Comic Con 2022
Batman’s live-action future should be on HBO, not on the big screen
The best superhero TV shows of all time
The most underrated movies on Netflix
Guardians of the Galaxy Vol. 3 trailer teases one final mission
The best fantasy movies on Amazon Prime Video
What are the top 5 highest-grossing MCU movies so far?
Ghana vs Uruguay live stream: Watch the game for free
South Korea vs Portugal live stream: Watch the game for free
The best action movies on Hulu right now
Where to watch Dolly Parton’s Mountain Magic Christmas
5 best movie threequels