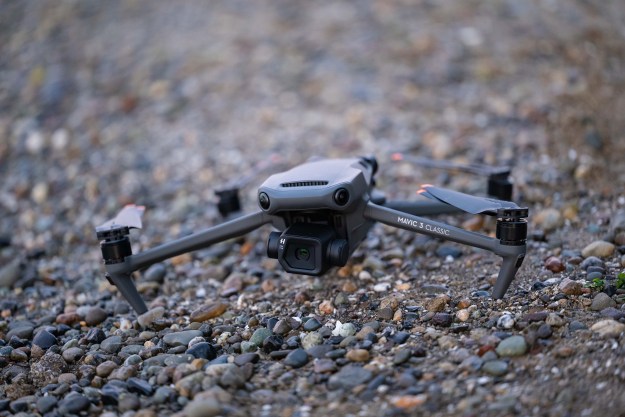 “The DJI Mavic 3 Classic keeps almost everything that made the original Mavic 3 great, but at a much lower price point.”

When the DJI Mavic 3 launched in 2021, it raised the bar for what a drone is capable of, but the problem was that it was priced to match its formidable aerial cinematography chops. Now, DJI has a way to address that problem.

The DJI Mavic 3 Classic brings this flagship line of drones back to Earth with a much more reasonable price tag. On paper, DJI has accomplished this without sacrificing the core capabilities of the original Mavic 3, but does this lofty goal jibe with reality?

The Mavic 3 Classic is, as the name implies, classic. The Mavic line has inherited the crown of what a drone should be in the collective public consciousness, and the Classic fits that mold like a glove. Its four long arms fold snuggly in beside the chassis of the drone for easy transport. The large camera hangs on a three-axis gimbal beneath a wide forehead prow, and sensors are scattered all over the body of the drone. USB-C and microSD ports are located on the rear of the drone above the battery compartment.

If you’re familiar with the Mavic 2 drone series, then you’ll find the design of the Mavic 3 Classic to be a significant improvement. You don’t have to unfold the arms to access ports, and the drone features a much better camera protector than other DJI drones.

Whereas other drones have a clip-on piece of plastic to protect the camera during transport, the Mavic 3 Classic features a strap-on hood that’s highly robust, easier to attach, and also protects the propellers. It’s not quite as nice as the one included with the original Mavic 3, but it does its job well.

The primary camera of the original DJI Mavic 3 offers the best image quality of any consumer-level drone, and the Mavic 3 Classic shares that same awesome Hasselblad camera with a Micro4/3 size sensor. It delivers both stunning 5.1K video and 20MP still images, plus it can shoot slow-motion video in 4K at up to 120 frames per second. This camera is so good that it can stand in for a high-end mirrorless camera like my Nikon Z 6 in a pinch.

Of course, some major sacrifice had to be made for DJI to be able to shave off such a big chunk of the price tag of the Classic. This drone only features one camera, whereas the original Mavic 3 has an additional super telephoto camera, which offers 7x magnification. I personally miss having access to that extreme zoom range, which is particularly useful for filming subjects such as wildlife from a safe distance. I also use the zoom camera to single out compositions from wide landscapes, such as distant mountains.

The Mavic 3 Classic can record video using a D-log color profile, as well as the capability to shoot still photos in RAW format. These options make for extra flexibility while editing in post-processing, and they allow the Classic to be considered as a serious professional photography and videography tool.

When I flew the original Mavic 3 at launch in 2021, it was a bit disappointing. That drone started out with buggy software and many missing features. Over the past year since then, numerous major updates have ironed out all the kinks and transformed the experience of shooting with that flagship drone, and the Mavic 3 Classic has benefited enormously from all that hard work done by DJI engineers. The Classic was easy to get up and running, and I’m pleased to report that I never encountered any bugs or performance issues in my time testing it.

The Mavic 3 Classic is a very quiet drone, particularly compared to the likes of the DJI Avata. Its large propellers help to reduce the noise it produces, making it more usable in areas where there’s the potential to bother other people.

Its large propellers help to reduce the noise it produces, making it more usable in areas where there’s the potential to bother other people.

In terms of battery life, you can expect roughly 46 minutes of flight time on a charge. This is enough to make the Mavic 3 Classic one of the few drones where carrying a single battery with you on an outing doesn’t feel like a severe limitation. It’s also capable of maintaining image transmission with the controller at up to 15km, which means a very reliable and strong signal for use at more reasonable distances.

The sensor array of the Mavic 3 Classic is highly advanced and is very good at tracking subjects and avoiding obstacles. I personally prefer to fly the drone myself and only utilize obstacle avoidance as a failsafe. However, there are numerous automatic modes available for getting specific shots. Also, as with most modern drones, the Mavic 3 Classic includes return-to-home capability, but as with all safety measures, it should be viewed as an emergency tool rather than as something to rely on.

In terms of speed and wind resistance, the Mavic 3 Classic really shows its worth. It can stand pretty extreme, gusty conditions up to 12 m/s, and can fly at speeds up to 21 m/s. This makes it usable in weather that I’d never dare fly other drones in, and it enables more dynamic, exciting shots than with other, slower drones.

I tested the DJI Mavic 3 Classic with the DJI RC controller, which I praised in my review of the DJI Mini 3 Pro. It features a built-in screen, which I find to be far superior to the experience of flying with a controller that requires a phone or tablet to use as the screen.

The DJI Mavic 3 Classic starts at $1,470 for the drone only, meaning that if you already own a compatible controller, you don’t need to spend extra for a redundant controller. If you do need a new controller, the cheapest bundle is $1,600, which includes the DJI RC-N1 controller, though this does not have a built-in screen. You’ve got to pay another $150 to get the DJI RC controller with the screen, and I highly recommend that you choose that option over the more basic DJI RC-N1.

The optional Fly More Kit is available for an additional $650, which, while certainly steep, is nonetheless a smart purchase given the extra batteries, excellent carrying case, and other accessories it includes. I always end up purchasing the Fly More Kit when I buy a new DJI drone, as I always find myself in need of extra batteries anyway. However, given the long flight time per battery, you might be able to get away with fewer batteries than you would need to carry alongside other DJI drones.

The Mavic 3 Classic is certainly attractively priced given its capabilities, but if it’s still too far outside your budget, there are other great options available. The DJI Mini 3 Pro stands out in this regard, as it starts at $760 with a controller, and delivers very nice photo and video quality in a considerably smaller package than the Mavic 3 Classic. Alternatively, if you need a super-telephoto lens, the original Mavic 3 starts at $2,050.

The best drone in the skies, but now for less money

For anyone who wanted a Mavic 3 but couldn’t quite stomach the high price tag, the DJI Mavic 3 Classic is the flagship DJI drone you’ve been waiting for. The only significant thing you’re giving up is super zoom capability, but that’s something of a niche feature on a drone, and many people considering a Mavic will be happy to exchange it for a significant savings.

Between its impressive performance, fantastic camera, bug-free software experience, and attractive price point, the Mavic 3 Classic deserves a place in the kit of any drone photography enthusiast.