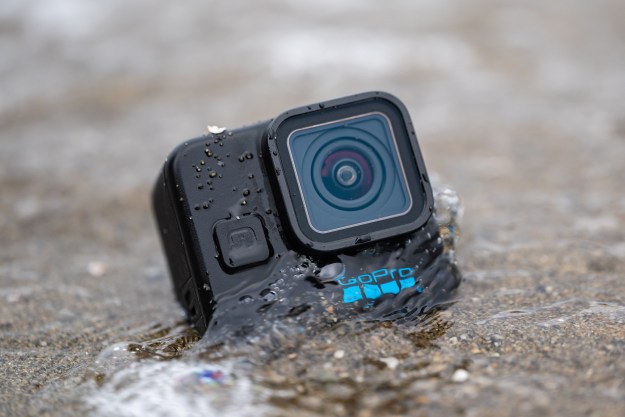 “The GoPro Hero 11 Mini is no less powerful than its big brother.”

It’s not often that we see a miniaturized version of a device that is nearly identical to the larger model with very few compromises — yet that’s what the GoPro Hero 11 Mini is aiming to accomplish.

This petite little camera goes toe-to-toe with the full-sized GoPro Hero 11 Black on paper, except that it has neither a front nor rear screen. This potentially means that the Hero 11 Mini might be ideal for applications where saving space outweighs convenience. But how does it all come together in practice?

The most notable thing about the GoPro Hero 11 Mini (after its small size) is its lack of a large, rear display. The camera is controlled entirely using the power and record buttons, as well as voice control. Instead of a screen, the Hero 11 Mini features a large heat sink on its rear, as well as a second mounting bracket.

My only major complaint with the GoPro Hero 11 Mini is that it doesn’t feature a removable battery. I fully understand why this decision was made, as a replaceable battery would no doubt have meant increasing the size of the Hero 11 Mini. However, it does limit the life span of the camera, and if something goes wrong with the battery, then the entire device is toast.

The GoPro Hero 11 Mini mirrors the excellent performance of the more mainstream Hero 11 Black; that is to say, it’s very competent indeed. The tall 8:7 sensor allows you to pull many different aspect ratios out of a single shot for sharing on multiple platforms. It can shoot up to 5.3K at 60 frames per second (fps), 4K at up to 120 fps, and 2.7K at up to 240 fps. Numerous field-of-view options are available, ranging from narrow to Hyperview, and the camera includes Hypersmooth 5.0 stabilization as well as Horizon Lock.

The Hero 11 Mini mirrors the excellent performance of the more mainstream Hero 11 Black.

Since the image quality and camera options are identical to the Mini’s big brother, I won’t go into more detail here. For a deeper dive into image quality, check out my recent review of the GoPro Hero 11 Black.

The Hero 11 Mini being so much smaller than the Hero 11 Black means it has a much trickier time dissipating heat, which is why the rear is one big heat sink. Fortunately, this heat sink seems to work very well, and I never experienced any issues with overheating. Take my experience with skepticism, however, since air temperatures were below freezing for much of the time I tested the camera.

The other key aspect of performance of the Hero 11 Mini is how not having a front or back screen affects user experience. I was happily surprised by how little of an inconvenience this ends up being. Yes, I do sometimes miss being able to directly preview my footage, or use a touchscreen to adjust various settings, but the truth is that I was able to adjust very quickly to the lack of these conveniences.

The Hero 11 Mini can be connected to the GoPro Quik app on an Android or iOS device, where settings can be adjusted in detail. On the device itself, the power and record buttons are used to navigate various menus, which are displayed on the tiny top LCD display. This display is really quite impressive in its quality and readability, and with a little practice, I was easily able to alter different modes and settings only using the two buttons.

In terms of waterproofing and durability, the Hero 11 Mini is drop-resistant and rated to be waterproof down to 33 feet. The Hero 11 Black was already impressively tough, and if anything, the Mini — with its lack of relatively vulnerable screens — should be able to take even more punishment than its big brother.

The audio quality of the microphone array is identical to that of the full-size Hero 11 Black. I was expecting some degree of compromise here, but I was pleasantly surprised by how well it performed in this regard. I frequently use Hero cameras to record quick vlog-style clips for my YouTube videos, and the Hero 11 Mini is great for this purpose. However, I would give the edge for vlogging to the full-size Hero 11 Black, as the front-facing screen of that camera makes composition much easier.

With the Mini, there’s some guesswork involved in composition, though with a wide-angle GoPro lens, whatever you point it at will be in the frame, so it’s not a big deal. When I wanted to more carefully frame a particular shot, I just quickly connected the camera to the Quik app on my phone to get a wireless preview of what the camera sees.

In recent years, the subscription service GoPro offers has grown to offer a ton of value. From discounts on cameras and accessories to automatic uploads to free and unlimited cloud storage, it’s really a must when buying a GoPro. Regardless of the subscription, the Quik app is an essential tool to pair with the Hero 11 Mini, as it allows for more granular control of the camera than what’s available through the integrated menu system. It’s available for both Android and iOS, and is well-designed and highly usable.

That works out to $100 less than the Hero 11 Black, which, given its many similar capabilities, makes the Mini something of a bargain. The Mini is roughly the same price as the DJI Action 2, which is even smaller, though it lacks many of the capabilities of the Hero 11 Mini. The Insta360 Go 2 is another tiny action camera. It’s smaller, and it costs less than either the GoPro or the DJI, but it is severely limited compared to either.

A miniature camera with tons of promise

It really is impressive how GoPro has managed to fit almost everything that makes the full-sized Hero 11 Black into the smaller chassis of the Mini. This creates a good range of choices for anyone in the market for a new action camera.

If you’re looking for a smaller camera for drones, RC vehicles, or any application where you want a more compact camera, the Mini is the camera to choose. It’s also an attractive way to get the power of the full-sized Black at a lower price point. The Hero 11 Black is a better choice if you need easier access to on-camera controls, front and back screens for composition, and replaceable batteries.

The bottom line is that the GoPro Hero 11 Mini may be small, but it’s no less mighty despite its diminutive dimensions.

Topics
Video-editing app LumaFusion to get a Galaxy Tab S8 launch
Apple responds to troubling iPhone 14 Pro camera issue
The DJI Osmo Action 3 looks nothing like the Action 2
GoPro Hero 11 Black leak suggests a moderate upgrade
Netflix sheds light on its ‘approved cameras’ for filmmakers
How to remove the background from an image
Instagram boss says to expect even more video content
6 awesome Earth images captured from the ISS in July
This GoPro Hero 10 bundle is $100 off at Best Buy today
The best iPhone tripods for 2022
Watch this Mavic 3 drone soar above the world’s highest mountain
How to watch DJI unveil an all-new drone today
DJI Avata vs. DJI FPV: Which first-person drone is best for you?