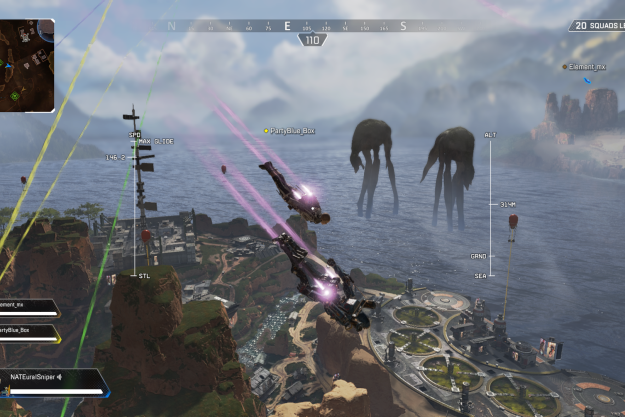 “Refined and intuitive, Apex Legends is a maturation of battle royale.”

In a time where studios like Cliffy B’s Boss Key have lost it all betting on a trend and Steam’s line up of hastily cobbled together genre entries seems to grow daily, Apex Legends should feel cynical. I mean, it’s a battle royale hero shooter entering a landscape dominated by giants like Overwatch, Fortnite, and PUBG.

That doesn’t strike much confidence.

After the critically acclaimed Titanfall 2 failed to make waves commercially, many feared that EA-owned developer Respawn Entertainment had been put to work on a passionless, boardroom-designed cash grab; a swansong for an ailing studio.

On paper, there’s not much that distinguishes Apex Legends from the countless other battle royale’s clogging up the oversaturated market. It has its own spin on PUBG’s steadily constricting death ring, Overwatch’s roster of likable characters, and Titanfall 2’s parkour-inspired fluidity.

But somehow the game, which launched in early February, it separates itself from the dozens of other genre clones in a way that’s hard to quantify. It has polish. It has passion. But most importantly, Apex Legends has heart — even the robot.

A Legend in the Making

The basics of Apex Legends will be familiar to anyone who knows their “drops” from their “chicken dinners.” After choosing from one of eight Legends (including two unlockable characters, Caustic and Mirage), you’ll be paired up with two other teammates and flown over the huge, industrial desert map in a dropship.

The ping system is not only one of Apex Legend‘s best features but exemplifies what makes the game so special.

A randomly selected “Dropmaster” chooses where the team lands, but teammates can use a “ping” system to suggest a location. You’ll all drop unarmed, and the first few minutes of a match tend to meld into a frantic scramble for armor, weapons, and attachments. Even more so if you happen to drop close to another team. I’ve lost more matches than I care to remember by being punched to death in the first five minutes. Don’t ask me to elaborate because I don’t want to talk about it.

Again, it’s a battle royale, so the goal is to be the last team of three standing out of the twenty teams of hopeful contenders that start each match.

However, down doesn’t necessarily mean out in Apex Legends. Fallen teammates can be revived using respawn beacons as long as at least one member of your team is still standing, but reviving, healing, and using the beacons all take time.

What is really only a brief ten-second delay can feel like eons in the heat of battle. Learning when to push forward or duck out of a firefight to recuperate is crucial to success. At least, that’s what I’m told. “Success” and “my current win ratio” aren’t all that compatible at the moment.

Let’s talk about that “ping” system some more. It’s not only one of Apex Legend‘s best features but exemplifies what makes the game so special. If you’re like me, you’ve avoided battle royales because of how unwelcoming they can feel to newcomers. Apex is a great entry point, not only because of how intuitive each of its systems is, but because of how accessible it feels.

It can feel as though you’ve been through hell and back in a matter of only 15 minutes.

There’s always going to be a certain level of elitism in competitive games, and Apex certainly has a high skill ceiling for those that want to get seriously invested. Combine that competitive spirit with the respawn system and the way it encourages teamwork and communication, and you get an experience that’s fun, even when learning the ropes.

By using the right bumper or middle mouse button on PC, you’ll be able to highlight opposing players, useful items, and important locations for your team. If you’re not in the mood for a delightful conversation with internet strangers, the ping system allows you to easily communicate with your team without ever switching on your headset.

Even simple interactions like thanking a teammate when they ping an important piece of loot for you helps build a sense of camaraderie. This is especially true after you’ve revived, healed and defended each other in dozens of firefights.

By the time you’re down to the last few teams on the map, it can feel as though you’ve been through hell and back in a matter of only 15 minutes. The ping system seems like a relatively simple addition but it goes a long way towards making Apex Legends as enjoyable as it is.

As previously mentioned, the game features eight characters in total, including two unlockable through in-game currency. Both the noxious gas-trap laying Caustic and the decoy-deploying Mirage are interesting additions, and neither is so overpowered as to make their inclusion as purchasable extras seem obviously exploitative.

Guns turn into formidable instruments of death as you collect more deadly and useful attachments.

The remaining six Legends are Lifeline, Gibraltar, Bangalore, Bloodhound, Pathfinder, and Wraith. That’s one man, three women, one non-binary, and one robot. Pathfinder and Lifeline both play support roles, shooting out ziplines and healing, respectively. Bloodhound can track enemy movement, Gibraltar can lay shield boosters, and Wraith is extra agile under fire.

Aside from a few uneven hitboxes on Pathfinder and Gibraltar that Respawn is currently fine-tuning, each Legend feels well balanced. For entry- to mid-level players, victory comes down to individual skill and teamwork, rather than just picking an obviously superior character.

Equipment is another huge factor here. Apex Legend’s character abilities and clever use of the environment combined with the considerable array of guns, grenades, and gadgets is where it really starts to shine. Different areas of the map offer different tiers of loot, color-coded in a way that’ll be familiar to anyone who’s ever poured months of their precious, fleeting mortality into a schlooter (loot shooter) before.

The basic guns you find at the start of a match turn into formidable instruments of death as you collect more deadly and useful attachments. Shield, health, and special boosters; fire grenades; and throwing stars all add a tactical layer to combat. Destructible doors, ziplines, and slide jumping make each encounter tense and varied.

While all of this is great, it doesn’t quite explain what makes Apex Legends so special. As I said, that’s a bit more tricky to quantify using a feature list. My nearest comparison, aside from the games it takes influence from, would be a roguelike. Something like Dead Cells or XCOM on Ironman difficulty.

Even though you’ll be spending less time shooting than in a more traditional FPS deathmatch, each conflict feels that much more tense and meaningful because the stakes are so high. Each of the game’s systems — the guns, movement, abilities, and defensive and offensive items — come together and play off of one another in a way that ensures no two encounters play out exactly the same way.

This and the fact that Apex Legends encourages teamwork means that even though it’s great fun to win a game, it’s sometimes just as fun to lose. Which is good, because it’s something you’re going to need to get used to.

Apex Legends is an EA published, free-to-play game, and it, unfortunately, features a lot of the questionable practices we’ve come to expect from that as of late. Lootboxes, multiple currencies sold in awkward quantities, and more cosmetics than anyone could reasonably need are all present here.

The good news is there are absolutely no pay-to-win elements, and with enough time, everything can be earned by just playing the game. Respawn absolutely deserves financial success from Apex Legends, so a few monetization options are to be expected, but the sheer quantity of it remains an example of a blatant, greedy attempt to extract obscene quantities of money from completionists. There are some especially snazzy skins, though.

Each of the top contenders in the battle royale genre offers something different, but there’s a reason Apex Legends has exploded in popularity so quickly. It’s the most accessible and straight-up enjoyable game that uses the formula.

If you’ve already played a few rounds and thought “what this game really needs is some giant stompy mech bois,” then the criminally overlooked Titanfall 2 might be for you, especially since the multiplayer has seen a surge in popularity since Apex’s release.

You don’t have to — it’s free! That’s the best price. It’s absolutely worth the bandwidth, though, as long as you can ignore Origin trying to sell you Anthem.