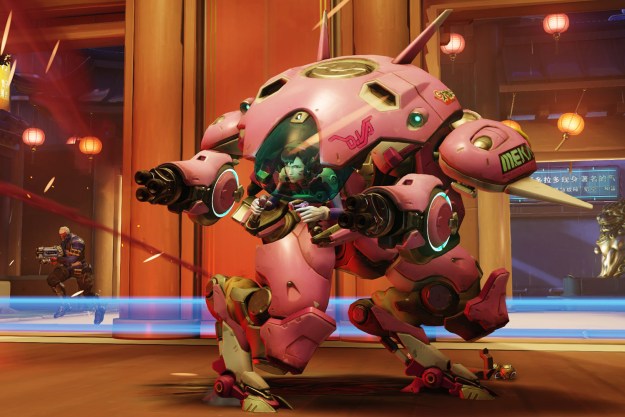 When developers set out to make team-based games, Overwatch is what they’re hoping to achieve.

In Overwatch you can play as a giant, super-smart gorilla who leaps into battle and blasts enemies with a gun that spews electricity; a gun-slinging cowboy who can drop enemies from 100 paces; a robot who’s also a tank; or an Australian pyromaniac who sets irritating traps, among more than a dozen other characters. Oh, and you can teleport, fly, shoot rockets, rewind time, construct strategic defenses, freeze your enemies solid and summon a gigantic ghost dragon to tear folks apart.

You can do all that stuff in the same match, quickly and easily. Overwatch is a surprisingly accessible team-based multiplayer shooter with a deceptive amount of depth. Most gamers with any experience at all will pick it up in almost no time, and dump hours into uncovering all its details and strategies.

Overwatch isn’t a mold-breaker. Plenty of people have likened it to Valve’s Team Fortress 2, or multiplayer online battle arena games like League of Legends and Dota 2. It’s not especially different from class-based shooters that have come before it, like Battlefield, Brink, or even Return to Castle Wolfenstein way back in the era of the original Xbox and PlayStation 2.

What Overwatch brings to the table that other games of its ilk don’t is a perfect combination of the moving parts found in those other titles. Watching Overwatch in action is like seeing a puzzle box solved. It’s baffling how well all of its components interact.

Those parts are, namely, its characters. At launch, the roster of uniquely cartoonish playable characters in the game stood at 21, and six more have subsequently been added in free updates. The personalities players can inhabit in the game are broken into four categories, recognizable to people who play MOBAs or massively multiplayer online games like World of Warcraft: There are damage-dealing attackers characters, characters that dish out short-term supportive boosts and healing, area-denying defenders, and “tanks” — the big brutes whose primary function is to draw fire and take punishment.

The classes and roles are familiar to online game players, but it’s the variety of moves the characters offer that makes them so much fun to play. There are several characters whose primary function is just to rack up kills, or just to play tank, but each one has very different abilities, uses, and strengths and weaknesses from the others. Playing as Winston, the science-minded gorilla who leaps into the fray, is very different from playing Reinhardt, the shield-bearing hammer-swinging knight who lets players hide behind his protective barrier. While both are technically tanks, they’re worlds apart in how they play and function.

When developers set out to make team-based games, Overwatch is what they’re hoping to achieve.

Overwatch lets you switch characters basically on the fly to adjust your strategy and change your tactics mid-game. Your primary goal in every match is not to eliminate the other team like in most shooters, but to capture or defend objectives — specific areas in the level, or a moving “payload” that only advances when the attacking team stands near it, and which stalls or even reverses when defenders approach.

Teamwork is essential to victory. There’s no real benefit to being a “lone wolf” in Overwatch, unlike most other shooters on the market. Healing your teammates or protecting them with shields is just as important as gunning down the opposition. Teams that pay attention to their composition, picking complementary characters and working together, always beat out teams full of players used to going it alone in Call of Duty.

That’s as Blizzard intended, and it’s what makes Overwatch such a blast to play. Other people — especially friends you bring along with you and can trust to work with you — are the engines that fill out the carefully crafted, almost perfectly interlocking pieces that Blizzard has created.

It gets better over time

That’s not to say Overwatch is a perfect game, but like all of Blizzard’s titles, it has continued to evolve over time. For instance, certain characters who used turrets, like dwarf-like engineer Torbjörn and robotic Bastion, felt just a touch too powerful at launch, so the game was patched to weaken the turrets and make the game feel more balanced. As new heroes have joined the roster and players’ strategies evolve, Blizzard has regularly (and sometimes radically)  reworked all of the characters on a rolling basis in order to maintain a fresh and balanced metagame.

Despite having some 17 main maps, including a few added post-release, Overwatch can still feel pretty thin at times. The game modes are all very similar, with one team attacking a specific point on the map and controlling it for a few seconds, and the other team trying to hold them off. Sometimes they’ll include the moving payloads, which are just a mobile version of the control point game type (also known as King of the Hill in some games). In addition to Quick Play, there’s a ranked, Competitive mode for serious players, and an Arcade that features a rotating selection of variant modes (such as Deathmatch, Capture the Flag, or Low Gravity), as well as a lobby for custom games and recurring, seasonal events with special gameplay modes. For the most part, however, these are somewhat narrow iterations of the same basic team-oriented, area control gameplay, however.

Overwatch makes it work because there are 27 characters to try (with a new one coming every several months now) and every single one is fun and fascinating. They’re all beautifully rendered, earnest cartoon heroes (or villains) with big personalities, and trying each — and getting skilled enough to recognize how to use them to the best of their individual abilities, and how to kill them at a key moment — is what makes the game worth playing. This is a game about depth and mastery, not experiencing a breadth of fresh content.

But especially at a price point of $60, some players will feel like Overwatch needs more meat on its bones as a multiplayer-only shooter with roughly two game modes. Blizzard has since launched a professional esports league for the game as well, which will help bring attention to the game, but some worry that it will detract from the developer’s focus on improving the experience for average players. Many have still found the social and competitive features to still be wanting, as well. It ought to be easier to find and team up with friends or to make new ones, for example; Overwatch’s user interface menu buries the list of other players in a way that feels annoying and counterintuitive to track them down.

The same goes for when you might want to mute another player on your team, something that comes up a lot in multiplayer shooters. Especially in the console versions, the lack of a keyboard means hunting through two or three menus to silence the guy who’s blaring his TV through his microphone and yelling at his kids. While the developers have taken steps to encourage better behavior between players, it’s an ongoing process.

It might not feel like there’s much to the overall package that is Overwatch, but nearly two years of playing intensely hasn’t satiated our appetite yet. Like all team-based games, Overwatch is better in every way when you add your own friends to the mix, and jumping into random games solo is a recipe for screaming at your TV and complaining about the awful choices your teammates are making, like bringing two snipers or neglecting to have a healer.

But the whole package just feels great to play. There’s so much nuance to discover with each of the characters that Overwatch can subsist on the delight of a perfectly placed Hanzo arrow, or a brilliantly executed harassment campaign by superfast Tracers. Where Overwatch fails to provide variety match-to-match, it succeeds brilliantly in providing variety in how the game can unfold minute-to-minute.

That’s what makes it so impressive. Blizzard has executed on making this a fun game to play under almost any circumstance. Mileage varies when going in solo — and when you’re not willing to communicate with teammates or work together — but the underlying components of Overwatch work brilliantly. Other developers making team games would do well to take note.

No. Several years in, Overwatch still stands head-and-shoulders above other team-based shooters, thanks to the extraordinary degree of polish that Blizzard brings to all of its products.

Blizzard shows no signs of slowing down support for the game nearly two years after its release with a steady stream of changes and additions–Overwatch is very much designed to be run as a service for years to come, and Blizzard is one of the best-qualified developer to do that.

Yes. From its characters and lore to its gameplay and aesthetics, Overwatch is one of the most exquisitely polished shooters we’ve ever played, elevating the genre to a strategic team sport that even the Call of Duty-averse can get into.

Blizzard Entertainment provided a PlayStation 4 copy of Overwatch: Origins Edition for this review.

Fire Emblem Engage bond levels: how to get max Bond Levels fast
Warzone 2.0 Season 2: release date, Ashika Island map, and Resurgence mode
The best upcoming PS5 games: 2023 and beyond
PS Plus adds Evil Dead, OlliOlli World, and more in February
Best Gaming PC Deals: Save on RTX 3070, 3080, 3090 PCs
The best video game remakes reinvent the classics, they don’t just revisit them
Best Buy will give you a $10 to pre-order Hogwarts Legacy today
Save $620 on this Lenovo gaming laptop with an RTX 3070
AMD vs. Intel: which wins in 2023?
Forspoken settings: change these settings for a better experience
Add 2TB of storage to your PS5 with an SSD and save $70 with this deal
Fall Out Boy concert in Fortnite: start time, island code, and more
Marvel Snap is dangerously close to becoming a pay-to-win game