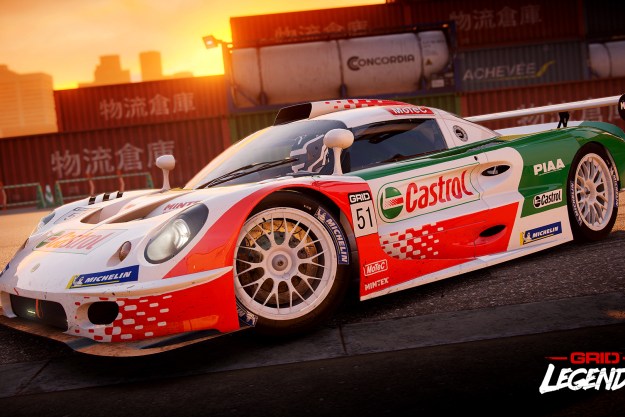 “Grid Legends' Driven to Glory story misses more than it hits, but this is an otherwise solid, if unambitious, racing game.”

Grid Legends is like the kind of car one buys out of necessity. It’s not a beautiful sports car to flaunt to others like a Gran Turismo game or a sturdy and robust vehicle that can handle anything off-roading throws at you like a Forza Horizon game. It’s that car that will get you to work every day, but not be something you show off to friends and family.

From graphics to sound to gameplay, Grid Legends is perfectly adequate. The developers know the game is acceptable in these areas, so it tries to stand out with a unique approach to its narrative. Developer Codemasters has always cared more about the story in its racing games than its competitors. Grid Legends is the culmination of that as its story mode is a live-action documentary about an underdog racing team.

While using this framing device for its narrative is innovative, the Driven to Glory  storyline ultimately falls flat. Grid Legends is simply an enjoyable, if underwhelming racing game overshadowed by the new Forza Horizon and Gran Turismo games it is being released between.

Grid Legends features everything players have come to expect from a racing game. There are over 100 tracks spread across the world and more than 100 cars of every type across notable brands to drive on them. These aren’t the highest-fidelity car models and there isn’t a vast open world to explore, but it isn’t ugly. Players looking for a standard racing game won’t have a bad time.

There are several different race types that players will experience over the Driven to Glory story campaign and the Career mode, where players complete races and sponsor challenges to earn currency and gain new abilities, stat boosts, and cars. The standout race type is Elimination, a mode where the drivers in last place are disqualified at certain intervals, so players fight to be at the front of the pack for as long as possible.

It sounds good and plays fine, but there are very few things Grid Legends does better than any other racing game.

Grid Legends is not as arcade-like as Forza Horizon, and it’s not an overly punishing simulation that will doom the player if they brake too hard at the wrong time. And even if the player does mess up, there’s a handy flashbacks feature to rewind time up to three times in a race. It sounds good and plays fine, but there are very few things Grid Legends does better than any other racing game.

Grid Legends’ ace in the hole is that it does a fantastic job at making players feel like they earn their victories. It features a Nemesis system (not that one) that tracks whether the player gets a little too aggressive and is constantly bumping into and cutting off other drivers. If they are particularly aggressive toward an A.I. driver, that driver will remember and get revenge by cutting the player off and being aggressive later in the race.

This makes the player have to account for aggressive driver tendencies from A.I., even though that’s an experience often reserved for multiplayer in racing games. And for those interested, Grid Legends features robust cross-platform multiplayer that players can drop in and out of at any time.

The best moments in the campaign and the career mode were when I started at the back of the pack and had to fight my way to the front, dealing with the Nemesis system and commanding my teammate driver along the way.

Grid Legends’ ace in the hole is that it does a fantastic job at making players feel like they earn their victories.

Grid Legends will make players remember individual drivers with this system, even if they are faceless A.I. characters, so it’s not too surprising that Codemasters wanted to go one step further and put faces and personalities to those names. Unfortunately, Codemasters does not fully pull that off.

The idea of a sports or racing game’s narrative presenting itself as a documentary seems very promising. The documentary format is unique from most games and allows the gameplay and interviews to not get in each other’s way even though they are tied together. I could see games like Madden or FIFA successfully implementing a story mode like this.

Driven to Glory follows the story of Seneca, a team in the fictional Grid World Series making a last-ditch effort to win a championship and keep the lights on. To do so, Seneca must rely on a new, unproven driver and overtake Ravenwest, a scummy team with cocky drivers and owners. Unfortunately, Grid Legends never digs deeper than that.

The biggest disservice to the narrative is that the player is a nonfactor.

This is a simple underdog story that will never shock the player with plot developments or twists, even if the featured performances are solid. Codemasters also boasted filming using the same extended reality tech used on The Mandalorian, but there are only a few locations, so it doesn’t feel much different than if the studio just used practical sets.

The biggest disservice to the narrative is that the player is a nonfactor. Despite how important “Driver 22” is to the story, the fictional documentarians never thought it’d be a good idea to interview that person. It’d be like if the documentary Val barely featured Val Kilmer and referred to him as “Batman 2” the whole time.

Thankfully, the documentary format does make some of the other drivers memorable. It also pairs well with the Nemesis system, as drivers like Ravenwest’s Nate McKane will be aggressive in races after trashing the player in an interview. Ncuti Gatwa from Netflix’s Sex Education is having a lot of fun as driver Valentin Manzi, but he’s severely underused and not relevant to the plot at all.

This story probably may have been better served had he taken the mantle of Driver 22 and breathed life into the fake doc’s narrative core, or if it was more reactive to the player’s actions. Ultimately, the use of live-action here limits the adventures just as much as it adds realism. The ending does teases a sequel, so I hope Codemasters learns from the shortcomings of Grid Legends because the documentary framing is an excellent idea.

Grid Legends doesn’t have the prettiest graphics or most expansive worlds in the racing game genre. Its documentary-framed story also isn’t as much of a revolution for the series as Codemasters likely had hoped. Still, solid mechanics like the Nemesis system ensure that racing game fans will enjoy the game, even though there definitely isn’t a lack of options right now. This is a commuter vehicle, not a luxury sports car.

Forza Horizon 5 is available on Xbox Game Pass and gives players a vast open world to explore. As for those looking for a hardcore simulation, Grid Legends will only be the new hotness for a week before Gran Turismo 7 launches on March 4.

Overall, the Driven to Glory story mode took six-and-a-half hours to beat, though I did have to retry a couple of levels. Beyond that, a lengthy career mode with lots of challenges and a fleshed-out online experience could keep players hooked for several more hours if they don’t move on to other racing games.

Yes, but those still playing Forza Horizon 5 or waiting for Gran Turismo 7 shouldn’t feel bad about skipping it.

A YouTuber has created a much smaller, thinner PS5 Slim

Everything we know about Minecraft Legends