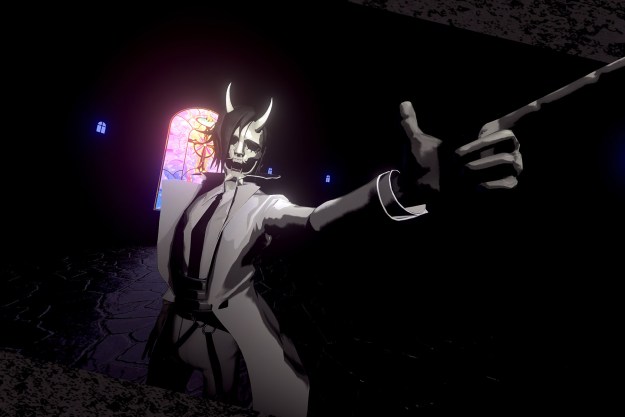 “Neon White swings for the fences with its card-based gun-platforming, but it pays off to create a wildly enjoyable action game.”

At a first glance, Neon White sounds like the kind of game that would have your local priest performing exorcisms. The indie shooter paints a grim portrait of the afterlife, one where divine judgment is turned into a gun bloodsport. But look below the surface sacrilege and you’ll find a more nuanced meditation of spirituality and the real heretics that weaponize it against the vulnerable.

Developed by Angel Matrix, Neon White is a genre-bending action game about a group of deceased misfits who have to fight their way into Heaven (literally). The oddball game has players collecting guns in the form of cards that can shoot enemies or be discarded to perform platforming moves. It’s a fast-paced action game about killing enough demons to appease a bloodthirsty God as part of a holy war that doesn’t smell right.

Through its stylish art and devilishly creative card combat, Neon White is a sharp-witted game about the hypocrisy that can often go hand-in-hand with religious fanaticism. Though it has some harsh words for zealots, it comes from a place of sincere spirituality instead of cynicism.

When Neon White begins, the game’s protagonist is already dead. The amnesiac hero is in the afterlife awaiting entry into Heaven along with a host of mask-wearing humans who have all been renamed after colors (your given name? Neon White). The story’s left turn comes immediately: All the “Neons” are sinners who are being pitted against one another in a divine competition. Whoever can kill the most demons in God’s name will gain entry into the pearly gates.

It’s an immediately gripping setup. Right from the jump, it’s clear that something’s off as self-indulgent angels watch the violent proceedings like a Sunday derby. The central mystery at the heart of Neon White becomes more layered as each chapter progresses, revealing more about White, the other Neons, and the mechanics of the afterlife. It plays out like a full season of a good anime.

The worldbuilding is a highlight throughout. While it’s an action game primarily, it has a fair amount of visual novel DNA. Between each chapter, White spends time in a heavenly hub chatting with other characters that gradually paint a full picture of the world. It’s darkly comedic and a little absurd (flying cats play a major role in the story), but it isn’t silly or irreverent. Rather, writer Ryann Shannon delivers a searing sermon about religious fear-mongering and the loyal “believers” who never seem to follow their own advice.

It would be easy for a story like that to quickly dip into brow-beating atheistic territory, but I appreciate that Neon White doesn’t write off religion altogether. Instead, its story recognizes that spirituality can be a healthy force for good, especially for those who are simply looking for purpose or peace in a hectic world. Its heavenly gatekeepers may be snooty and judgmental, but the game sincerely believes that anyone is worthy of forgiveness, whether that be from up above or here on Earth.

While its thoughtful story is worth delving into, Neon White’s primary strength is its creative combat, which fuses first-person shooting, platforming, and card management. Levels are short speed gauntlets where players need to wipe out every demon before making it to an exit. Many of its 90+ levels are meant to be completed in under a minute, giving the game a hellishly fun breakneck pace.

The fun comes from orchestrating a violent ballet full of bullets and perfectly timed pirouettes.

Different guns (handgun, shotgun, the usual) appear in the form of cards. While a card is active, players can shoot demons. However, each card has an alternate action that’s activated by discarding it. Drop a rifle and White shoots forward in a straight line that can cut through walls and enemies. Trashing a submachine gun, on the other hand, allows White to perform a devastating stomp. The puzzle of each level is that players need to figure out when to spend ammo and when to activate an ability in order to clear out all enemies while platforming. It’s a series of lightning-fast decisions that are incredibly satisfying to string together.

The only thing that lets it down is a lack of freedom in each level. Cards are laid out strategically along a linear path, so there’s rarely much room for experimentation. When I pick up a handgun, I’m almost always going to be using it right away. That’s a positive in some respects, as it keeps the game from getting too complicated with deck management — something that would be too difficult to do at the game’s speed. Still, there were times when I left levels feeling like I’d ridden on a rollercoaster ride, as opposed to completing a fluid action scene.

Shorter levels work much better than some of the game’s longer late-game gauntlets too. In 30-second levels, it’s easy to find a path through a level and then spend time trying to achieve the perfect run (faster times unlock rewards like leaderboards). Later levels can begin to feel like a slog when you have to replay one minute of easy platforming to get back to the split-second moment that’s tripping you up. Some checkpoints in longer levels may have helped alleviate some of the late-game drag.

Those gripes aside, the action in Neon White is always sharp. It’s an execution-heavy game in the same vein as indies like Boomerang X, and like those games, the fun comes from orchestrating a violent ballet full of bullets and perfectly timed pirouettes. The game continues to layer new guns, abilities, enemies, and obstacles into each level, making every chapter feel like a fresh hell to be mastered.

At around 12 hours casually, Neon White is a substantial game even before getting into its extra features. Its side-content is quite significant though, expanding the package into a challenge-packed action game that’ll last a while. There are nearly 100 well-designed levels to perfect, each of which has its own leaderboard, medal requirements, and collectible gifts that unlock after it has been cleared once.

Call it a heavenly delight or a guilty pleasure; either way, it’s divine.

The last part is one of the game’s most clever hooks. Gifts give players a reason to go back into levels and use their gun cards a bit more freely to track down every hidden present. Once found, those can be given to the game’s NPCs to unlock excellent bonus levels, as well as story-moving dialogue. Yes, on top of everything, Neon White also functions as a pretty good dating simulator.

While it’s not quite the master tradesman that something like Hades is, Neon White does everything it sets out to do quite well. There was rarely a point where I felt like I was slogging through dull lore to get back to the action or vice versa. Every piece fits into one another to create a successful hybrid game glued together with stylish visuals and a soundtrack full of bops. It has the chaotic energy, but still cohesive vision of a good Suda51 game — my head keeps going back to Killer7 when I try to find the right spiritual touchstone.

While there might be bits and pieces of other games in here, Neon White is the kind of wholly unique experience that makes the modern gaming scene so exciting. It deconstructs genre staples and narrative clichés, reassembling them into its own funhouse mirror image. Call it a heavenly delight or a guilty pleasure; either way, it’s divine.

Neon White takes some big swings with its card-shooter/platformer premise and fortunately doesn’t miss. Its execution-heavy action is wildly fast and fun, pushing players to complete complex demon-slaying gauntlets that pepper in exciting twists through the game’s last moments. Levels can feel disappointingly linear and longer stages can drag the momentum down, but the action is largely satisfying from start to finish. That would be enough to make this a worthwhile package, but its surprisingly thoughtful commentary on spirituality and strong late-game hooks make this a game worthy of divine judgment.

Hades has a similar genre-bending approach, though there’s nothing out there that’s quite like Neon White. Though publisher Devolver Digital has plenty of great execution-based action games of similar quality. Take your pick.

The story can be completed in roughly 12 hours, but there’s a ton to chase after the credits roll. Unlockable gifts, time chases, bonus levels, and more turn this into a robust package all around.

Yes. Neon White is a cool and confident action game with an odd action hook that’s fast and fantastic in equal measure.

Nintendo Indie World Showcase August 2021: How to watch and what to expect
The best Hades builds to help you escape the underworld
The best Nintendo Switch hidden gems
Exit the Gungeon’s stealth release highlights Nintendo’s Indie World Showcase
Pokémon Legends: Arceus deserves DLC before Scarlet and Violet
Hurry — this HP gaming PC is $450 for Cyber Monday
This is hands down the best Nintendo Switch Cyber Monday deal
How to get a free Gengar in Pokémon Scarlet and Violet
‘Wordle’ today, November 28: Answer, hints, and help for word of the day (#527)
Need a PS5 controller? This Cyber Monday deal has you covered
Save $50 with this (Oculus) Meta Quest 2 Cyber Monday deal
GameStop Cyber Monday Deal: Buy 2 Get 1 on all preowned Xbox One and PS4 games
Starship Troopers: Extermination turns sci-fi satire into a co-op shooter