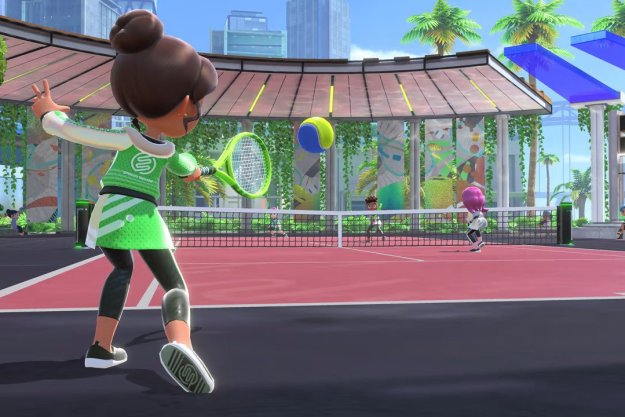 “Even with a few duds in the pack, Nintendo Switch Sports' highlights make it a must-own multiplayer party game.”

There’s no better feeling than bowling a strike, both in real life and Nintendo Switch Sports. It’s a small, but satisfying athletic accomplishment that doesn’t require years of training and discipline to pull off. It can almost happen by accident, with physics taking the wheel as soon as the bowling ball smashes into the pins. No matter how many times I hit a strike in Nintendo Switch Sports, I always let out a silent fist pump without fail.

That’s the lasting power of Nintendo’s now 16 year-old sports series. There’s nothing fundamentally different about bowling in Nintendo Switch Sports and Wii Sports, but there doesn’t have to be. Nintendo’s new package of sports minigames defies the normal expectation about modern games by remaining confident in its instantly gratifying gameplay instead of inventing new hooks to expand the experience. No real-life bowler has ever complained that the sport doesn’t add enough new features year after year, after all (imagine someone arguing that it’s time to add an 11th pin).

When Nintendo Switch Sports is focused on reinforcing already intuitive gameplay with more precise motion controls, it’s every bit as addictive as Wii Sports. It only loses points when it strives to be more complex than it needs to be.

If it ain’t broke

This time around, Nintendo’s anthology of sports games contains six activities at launch: Bowling, tennis, badminton, chambara, volleyball, and soccer. There are more highlights than duds in the package, and there’s a trend between the hits. Most of the best minigames (with one exception) require no explanation.

Every time I swing, I’m surprised that the ball always goes exactly where I intended.

Badminton, the collection’s crown jewel, is the perfect example of that. It’s a more pingpong-like variation of tennis that has two players volleying back and forth on a small court. There’s no tutorial; if you know how to swing a racquet, you know how to swing a Joy-con. Badminton matches are a fast and surprisingly intense test of reflexes and timing that I’m confident I could take to a family party and pull some smiles out of kids and adults alike.

That’s perhaps part of the reason why the returning classics from the original Wii Sports remain as enjoyable as ever here. Bowling has barely changed, with players rolling a 10 frame game by lining up shots and swinging their arm as if it were actually holding a ball. It never gets old. I’ve spent hours on end just trying to outdo my best record and I’m still not tired of it (though my right arm certainly is). There’s a special challenge mode, which puts obstacles in the lane, to add some variety, but I’ve found that I’m still perfectly happy just playing normal rounds.

Tennis is similarly repeatable, even though badminton has taken its throne. It’s also the sport that best highlights how precise Nintendo’s motion controls have become. Every time I swing, I’m surprised that the ball always goes exactly where I intended. There’s rarely a moment where my sportsmate (the game’s Mii 2.0 avatars) does something I don’t expect. In the past, I had to buy a clunky Wiimote add-on to reach that level of precision. A Joy-Con is far lighter and more accurate by comparison.

Nintendo Switch Sports’ best strength is that it removes as much friction from the experience as possible. I barely have to think about the controller in my hand when playing. It’s just me versus the pins.

While its simple pleasures are easy wins, Nintendo Switch Sports struggles when it tries to bring more depth to its activities. Volleyball, for instance, requires several motions. Players need to bump, jump, block, set, and spike the ball. Perhaps anticipating that it could be confusing to remember it all, the game flashes commands on screen to tell players what actions to perform. It feels less like playing volleyball and more like Simon Says.

Soccer is where the struggle to create complexity stands out the most. Players participate in a full-fledged, three-minute soccer game that has them running around a large field, spending stamina to run and kicking the ball with several techniques. It’s the only game where players need to manually move while playing (characters automatically run to the ball in sports like tennis), making it the most in-depth game in the series so far.

It’s no surprise that soccer ends up getting outclassed by its more stripped-down variant.

It’s not very elegant. I spend matches slowly running across the open field, barely ever getting my foot on the ball. Most matches I play go to overtime, with no team managing to score a single point. Part of the issue is that swinging a remote to kick goes against the simple brilliance of the series, where motion controls mimic real actions one to one. It’s no surprise that soccer ends up getting outclassed by its more stripped-down variant, a fun shootout mode where players can use a leg strap attachment to physically kick. Leg strap support will be added to the standard soccer mode this year, but I doubt I’ll go back to it once Mario Strikers: Battle League hits Switch this summer — whereas I’ll gladly play Switch Sports tennis over Mario Tennis Aces anytime.

Adding more moving parts to a sport isn’t an inherently flawed idea, though. Chambara is one of the game’s more tutorial-loaded activities, and also one of its clearest standouts. The sword fighting mode has players blocking and slashing by turning the Joy-con diagonally, vertically, and horizontally. It’s a surprisingly strategic battle that’s especially fun with a friend you can smack talk.

Chambara works because the core motions are easy to grasp. I turn my Joy-con to the side and my character’s sword turns with it. Simple. That’s the appeal of the Nintendo Sports series. I want to roll a bocce ball, swing a cricket bat, or push discs down a shuffleboard (all free ideas, Nintendo). Anything more than that feels like it betrays the series secret weapon: Its low barrier for entry.

The most alluring aspect of Nintendo Switch Sports is that Nintendo has already committed to long-term support. Free updates later this year will add golf to the game, expanding the roster of activities with another surefire hit. That’s important, because with six games at launch (two of which aren’t too exciting), the game selection is half that of Wii Sports Resort. The promise of more sports and free updates means that the game will be a bit more of an ongoing service — and not one you need to pay $2 a day to use.

It’s the kind of game that’ll be an essential part of any Switch owner’s collection in the back half of its life.

Full online play is another crucial, even if expected, addition here, and the game pushes players to buy into that. Gear, like clothing for sportsmates, can only be unlocked via online play. The game cycles in sets of gear that’ll only be available for a few weeks at a time, pushing players to rank up and unlock every piece before they vanish. I appreciate that there’s a light reward loop, but it does make solo and local multiplayer less enticing as neither awards prizes (though an online Trial Mode lets players unlock two items per week for playing against CPUs). I’m hoping that gets changed in an update down the line, as I imagine I’ll be playing local with friends more than online (though for what it’s worth, the online experience seems more stable than your typical Nintendo game at the moment).

Nintendo Switch Sports is ultimately most valuable as a party game, just as Wii Sports was 16 years ago. I enjoy playing solo (I’ll chase that perfect bowling game until I die), but the most fun I’ve had with it has routinely been with other people. Badminton is one of the best two-player experiences on the entire system for my money and nothing beats a casual bowling session in a room full of friends. It’s the kind of game that’ll be an essential part of any Switch owner’s collection in the back half of its life.

Though it does call the game’s release strategy into question. Whereas Wii Sports was a free pack-in with Switch consoles, Nintendo Switch Sports is a $40 release ($50 to get a physical copy with a leg strap). I’m skeptical that players will be willing to shell out that much for a game that’s not notably different from its predecessor on paper. If Nintendo packages it with Switch models this holiday season, I’m convinced it’ll be a home run — that is, as long as it adds baseball to the sports lineup.

Nintendo Switch Sports is exactly what it needs to be. It’s an intuitive package of Wii-era sports minigames with more precise motion controls and full online integration. Addictive activities like bowling and badminton make it one of the Switch’s best multiplayer party games, though overly complicated minigames like soccer miss the simple appeal of the series. With long-term support planned, I’m hopeful that Nintendo can build up the currently thin offering and turn it into the kind of console staple that any Switch owner needs to have installed.

If you want a more dedicated, in-depth sports game with motion controls, Mario Golf: Super Rush and Mario Tennis Aces may be more your speed.

Nintendo plans on supporting Switch Sports through the end of 2022, with plans to add golf and leg strap support for soccer. Add in online play and you could be reasonably satisfied into next year.

Yes. If you loved Wii Sports, there’s no reason you wouldn’t love this too. Though you’ll get more out of it as a multiplayer experience than a solo one.

Nintendo Switch Sports was tested on a Switch OLED docked to a TCL 6-Series RC35.