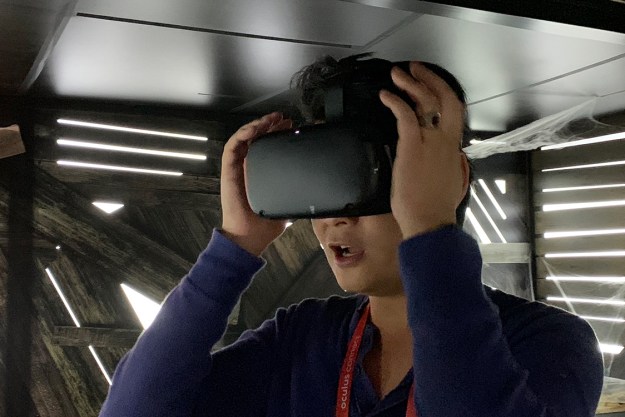 “Wireless, affordable, and easy to use, the Quest promises to bring virtual reality to the masses.”

Several hours into testing the Oculus Quest, I found myself in a Jedi dojo clutching a lightsaber. More than just holding the elegant weapon, I was slashing its humming blade through training bots and using it to deflect bolts of blaster fire. I was playing Vader Immortal, an episodic Star Wars adventure launching alongside Facebook’s new virtual reality headset. The real world had melted away entirely as I experienced the coolest, most immersive tech to ever sting my senses.

I was sold long before wrapping a gloved hand around the Jedi weapon of choice. The successor to the Oculus Rift and Oculus Go introduces itself as something special right out of the box. Even its tutorial and set-up process — potentially tedious tasks with the most polished tech — provides a magical, transformative experience.

One of the first things you’ll do is draw a virtual barrier, dubbed the “Guardian,” around the perimeter of your designated play space. It’s a safety precaution, but it made me feel like a wand-wielding wizard casting a spell. Tossing paper airplanes, grabbing blocks, and whacking ping pong balls during the earliest parts of the tutorial feels similarly fantastical.

I didn’t need to dive into the Quest’s library of games and apps to see what it’s capable of. That speaks not just to the impressiveness of the tech, but the thought and care that’s gone into making it approachable to a more casual consumer. Its out-of-the-box accessibility doesn’t just raise the bar, it hurls it like a spear, shattering the barriers that previously kept the mainstream audience at arm’s length.

For many, those barriers are a high-end gaming PC, tedious installation of external cameras and tracking sensors, and the tangle of wires that tether the best VR experiences to a game console or computer.

The Oculus Quest’s ease of use is its most appealing aspect. Getting started was as simple as charging the headset, installing batteries in the Touch controllers, and downloading the Oculus app on my mobile phone. It’s refreshing to always be just minutes away from experiencing something that would have seemed only possible in a science-fiction film a few years ago.

BEST OF BOTH VIRTUAL WORLDS

While the Quest scores big points for eliminating those obstacles, it deserves just as much credit for what it brings to the table. Most notably, its Insight Tracking sensors and Touch controllers go a long way toward delivering an unmatched sense of immersion. These elements essentially bring the best of both worlds from Oculus’ previous headsets – the controllers and six degrees of freedom from the Rift, and the wireless technology of the Go – while polishing and refining them for an all-in-one system.

Whether I was swinging a lightsaber in Vader Immortal or slashing, ducking, and dodging through an especially sweat-inducing session of Beat Saber, seeing my hands in those virtual worlds and enjoying the six degrees of freedom without worrying about wires wrapping around my legs allowed me to get lost in virtual worlds like I’ve never experienced before. The comfortable headset, intuitive user interface elements, and integrated speakers are just icing on the immersion-cranking cake.

The trade-off, of course, is lower specs and less processing power. While the Quest’s per-eye display resolution actually trumps the original Rift’s, it runs on a Qualcomm Snapdragon 835 processor, the same guts powering many smartphones and Lenovo’s Mirage Solo. Without a beast of a PC fueling the VR fantasies, the graphical fidelity in some games takes a hit. Similarly, the lack of external sensors means the tracking will sometimes lose its way, temporarily yanking me from my virtual vacation.

That said, the trade-off is worth it. The differences are negligible to barely noticeable and are far outweighed by an experience that continually had me scooping my jaw from the floor. I’ll take a slightly less attractive version of Creed: Rise to Glory in favor of being able to float like a butterfly and sting like a bee.

Six degrees of freedom without wires wrapping around my legs let me get lost in virtual worlds like never before.

Seasoned users of VR tech who are long past the days of being blown away by entering the Matrix from the comfort of their couch will weigh these pros and cons more heavily. If ease of use and demanding technical specs aren’t issues for you, there’s no doubt that the Quest’s older sibling, the Oculus Rift S, is the option to consider if you’re looking for a VR experience with fewer limitations.

Creed: Rise to Glory is just one of the 50-strong games/apps you’re able to dive into on day one. Early adopters will have access to brand new titles, like the aforementioned Vader Immortal and Dance Central VR, as well as many previous VR favorites making the jump to the Quest. The latter are more than mere ports though, as some of these existing offerings greatly benefit from the all-in-one, room-scale freedom of the headset. I’ll never play physically intensive games like Beat Saber and Superhot VR with a wired set-up again after I let loose with them on the Quest.

As someone who’s been a virtual reality enthusiast since John Carmack put a primitive headset constructed of duct-tape and ski goggles on me at 2012’s QuakeCon, I’d argue the Oculus Quest is the most impressive, immersive way to consume VR entertainment. It should speak volumes that my biggest gripe is that it recommends cleaning the lenses with a microfiber cloth, but doesn’t include one.

If you’re just stepping into the world of virtual reality or have only tried it at a friend’s house while tethered to a PC or PlayStation, you’re in for a real treat. Best of all, you needn’t be a gaming or gadget enthusiast to enjoy the Quest. Easy to use and starting at a price comparable to a low-end laptop or , it’s a virtual reality headset aimed at absolutely everyone.

The Oculus Quest offers a magical experience right out of the box, combining an incredibly easy set-up process with a hint of the VR wonders to come. Coupled with its wireless tech, six degrees of freedom, and Touch controllers, this approachability fuels an amazingly immersive, intuitive experience many can enjoy. Toss in a comfortable headset, palatable price tag, and a strong launch line-up of games and apps, and the Quest is VR’s best bet yet to go mainstream.

If you’re looking for a wireless out-of-the-box VR system, you won’t do better than the Oculus Quest. Competition is limited to the Oculus Go, which offers only three degrees of freedom and limits movement to your head, and the Lenovo Mirage Solo, which doesn’t offer nearly as many games and apps. But among wireless, smartphone-powered options, none currently match the Quest’s offerings in terms of tech, ease of use, and game/app selection.

At 50-plus games and apps, the Oculus Quest has a strong launch line-up right out of the gate. There’s plenty of existing Rift titles that will make the jump to the Quest, as well as upcoming games in development.

Yes. If you’re interested in an all-in-one virtual reality headset with the strongest line-up of games and apps, the Oculus Quest is the best system currently available.

Topics
The best OLED laptops for 2023
The best gaming tablets for 2023
PS VR2 games: launch games and what’s coming later
The best gaming speakers for 2023
The best RPGs for the Nintendo Switch
How to link your Fire Emblem Engage and Fire Emblem Heroes account
Xbox and Bethesda’s Developer_Direct: how to watch and what to expect
Goldeneye 007 comes to Game Pass and Nintendo Switch later this week
The best iPhone games in 2023: 31 games you need to play right now
I can’t believe I’m recommending Forspoken on PS5 over PC
Redfall’s May 2 release date revealed during Developer_Direct
The best Fire Emblem games, ranked from best to worst
Xbox just surprise announced and released a stylish new Game Pass title