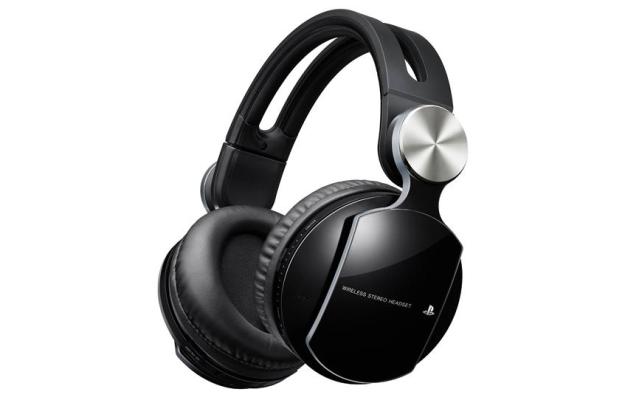 “Don’t expect a revolution in virtual surround sound, but do expect to be connected to your movies, music and games on a much higher, more engaging level.”

Sony’s first attempt at a wireless gaming headset was less than a slam dunk. Aside from showing up late to the game, Sony’s first go at this market segment was plagued by little annoyances like not including a USB charging cable for its internal rechargeable battery, lackluster sound quality with music, and an annoying retractable, fixed-angle microphone outfitted with a distracting LED status light. It’s too bad, too, because aside from these issues, Sony’s first wireless gaming headset showed a lot of promise – not the least of which was a simple USB dongle that delivered the wireless audio.

Well, good news, folks: Sony kept everything that was good about its first headset, fixed almost everything that sucked and even added in some new goodies. The Sony PS3 Pulse wireless stereo headset Elite Edition (yes, that is the full, official name) might just be the hot ticket for PS3 fanboys everywhere, but there’s no telling until we strap them on for a full round of testing. Read on for our full review.

The Pulse headset’s simplicity in design is apparent as soon as you crack open the box. There are only three pieces included: the headset, a USB wireless transmitter and a four-pole 3.5mm audio cable for connecting the cans to mobile devices. You might be noticing that there is still no USB charging cable. We can’t help but shake our head in bewilderment at why Sony would choose to omit a necessary and inexpensive part… again!

From an aesthetic design standpoint, we really like the direction Sony has taken with this headset. Gone is the thin slab of metal that used to adorn the headband. Now, a much simpler split-band design is in place. The color scheme is a blend of glossy black and matte black plastic with metallic accents. The result is a classy looking set of headphones can be worn in public with pride.

Likely due to the electronics built inside, the Pulse are a bit on the heavy side, but we wouldn’t characterize them as clunky – the weight is well distributed and despite having amply padded earcups, bulk is minimized.

There are several stand-out features at play with the Pulse headphones. We’ll start with the wireless audio delivery, which is handled by the aforementioned USB stick (roughly the size of a pack of gum). The USB stick transmits audio via 2.4GHz radio frequency. While recent Bluetooth profiles can offer superior audio fidelity, they also happen to be unstable and just finicky all the way around, so we can appreciate Sony going this route. We also like that there is a 3.5mm auxiliary input jack on the USB transmitter, which allows wireless audio delivery from just about any source, including a TV. For that, however, you’ll need a considerably longer 3.5mm audio cable – the cable packed with the headphones is only about 3 feet long.

The edges of the earcups are laden with buttons, sliders, switches and jacks. In this case, that means lots of audio processing features. A main volume slider handles general audio volume without regard for the balance between voice level and game audio; that’s handled by a separate slider that offers a continuously adjustable blend between the two. A third slider handles the “bass impact” level (more on that shortly), with the ability to turn it off entirely. Rounding out the list of controls is a power switch, a microphone mute button, a mode button (for different presets) and a virtual surround-sound button.

That many controls placed out of the view of the users makes on-the-fly adjustments initially difficult and frustrating. However, after a little bit of practice, we started to memorize where some of the controls were. If you buy a pair, it’s only a matter of time before you have everything down so that quick adjustments are second nature.

When we first read about the “bass impact” feature, we figured it for another heavy-handed bass boost that would basically change the EQ curve to deliver obscene amounts of low end, thereby compromising the rest of the headphone’s audio quality. But we were totally off base. Bass impact actually refers to a “pulse” (get it?) that the headphones emit in response to the bass information the headphones receive. Think of it as a bass shaker or rumble pack for your head. Bass info comes in and little transducers vibrate, jarring your head slightly. The effect can be subtle or nearly whiplash-inducing, depending on your preference. Sony thinks this will help deliver sound queues like approaching foot-fall in a more convincing and helpful manner.

Adding to the Pulse’s sonic customization is a series of audio presets designed to optimize the “bass impact” performance for different scenarios. You get a preset for movies, music, shooters, fighting and racing games.

Finally, we come to the Pulse’s 7.1-channel virtual surround sound feature. We’ve been vocal opponents of faux-surround and, frankly, we don’t expect our opinion to change any time soon. In our experience, virtual surround processing requires too much imagination and, practically speaking for games, isn’t a big help in identifying the location of objects. Still, we can understand that a standard stereo headset doesn’t carry the same cachet as one that purports to deliver surround, so we understand Sony’s decision to keep the feature around, despite it receiving lukewarm reviews in the past.

We tested the Pulse headphones in a variety of scenarios: We hardwired them to our iPhone 4S for music listening, streamed music and movies wirelessly from a laptop computer, and connected them to our PS3 and PS Vita to evaluate both movie and gaming audio.

When hardwired to a mobile device, the Pulse’s internal amp and processing must be turned off, essentially turning them into a passive set of cans. Once we started playing music through the Pulse, we knew immediately that we were going to like the headphones. The audio quality we experienced is on par with the sort of expensive, audio-only headphones that we’re used to testing. With the exception of some unnecessarily bright upper treble, the Pulse sound balanced and controlled. Bass response was especially impressive, given its punch, depth and accurate tone. In fact, in terms of bass accuracy, these headphones put the benchmark Beats by Dr. Dre line to shame.

We then connected the audio cable directly to our laptop. As expected, the sound was pretty bad (our laptop’s built-in DAC is worthless). We then switched to wireless delivery by using the provided USB transmitter (and in doing so, bypassed our laptop’s own DAC) and were surprised at the remarkable improvement in audio quality. In fact, the wireless delivery was very close to the wired iPhone connection, with a very slight loss of bass depth and high frequency extension.

For grins, we engaged the bass impact feature while listening to music and, frankly, we felt it was more distracting than anything else. We share the same impression of bass shakers installed in home theater seats when used for music. Still, we kept an open mind as we queued up a movie, because we enjoy bass shakers for movie content in the home theater environment quite a bit. Perhaps we would feel the same with the pulse?

We did. The bass impact feature was a ton of fun to crank up during action-packed movie sequences. Every explosion and bone-crunching blow was delivered with a visceral impact reminiscent of a home subwoofer. The only down side is that if bass impact is cranked up, even the low end of male voices will trigger it, lending a head-shaking feeling when it isn’t appropriate.

As expected, the Pulse worked very well for gaming. The headphones’ sonic pedigree was best utilized in games like Journey which is flooded with swirling wind sounds, then cuts to a symphonic soundtrack. Of course, explosions and gun fire were delivered with head-rattling impact as well, thanks in part to the Pulse’s excellent bass response paired with its bass impact feature. We were also very pleased with the Pulse’s performance when used with our PS Vita, where the cans actually sounded better than when used with the PS3.

We weren’t surprised by the Pulse’s virtual 7.1 surround sound performance, which is to say it is on par with the virtual surround experience delivered by Sony’s gaming headset competitors. Localizing sound effects as coming from a particular direction is still no easier than it is with a stereo headset. For that, we still recommend a proper surround sound system or gaming headphone with multiple drivers.

Voice clarity was never a problem for us. We found using the Pulse with our iPhone worked very well and, while playing with our friends on the PlayStation network, we were only asked to “speak up” once – likely due to the fact that we were mumbling during a loud game and not because of any limitation of the Pulse’s hidden, noise-canceling microphones.

Just a few more tidbits to mention: Battery life ranges from four to six hours, depending on how much you tax the headphones. High volumes and cranked-up bass-impact level will shorten use time. Wireless range is average for a RF headphone – about 30 feet or so – and not as easily affected by walls and other obstructions.

Sony clearly learned something from its first go at a gaming headset, as it has fired back with an outstanding product in its Pulse Elite Edition headphones. When it comes to wireless headset solutions, the Pulse is as hassle-free as they come. It doesn’t hurt that you can use them with just about any mobile device, too. The sound quality is amongst the best we’ve heard from any Sony headphone and we were surprised to find the bass impact feature actually served to enhance movie watching and game playing, rather than detract from it. Don’t expect a revolution in virtual surround sound, but do expect to be connected to your movies, music and games on a much higher, more engaging level.