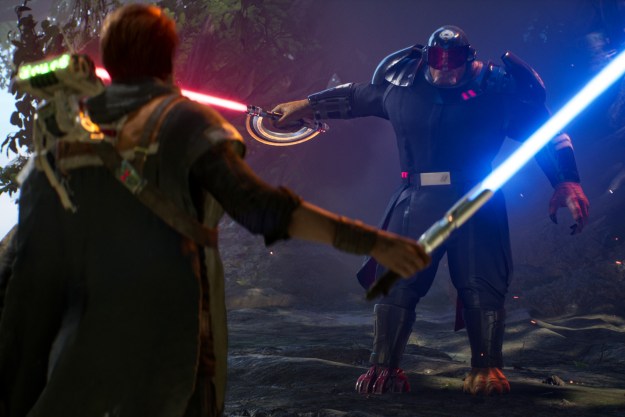 “Fallen Order isn't original, but it's a fantastic romp any Star Wars fan should play.”

The “sequel trilogy” of Star Wars films that kicked off with 2015’s The Force Awakens are derivative by design. We’ve seen nearly every story beat covered by a previous movie in some way. Yet the callbacks and the themes surrounding the ever-present struggle between the light and dark sides of the force have made the movies more charming than tired.

With Star Wars Jedi: Fallen Order, Respawn Entertainment has brought that theme to gaming, blending elements from the films and several popular game franchises outside of Star Wars to create a thrilling action-adventure game. Nothing in Fallen Order feels wholly new, but its expert execution will keep you entertained from start to finish.

From the darkness comes hope

Rather than focus on the current era of Star Wars stories, Respawn’s games takes place in the gap between the prequel trilogy and the original trilogy. Set after Order 66, the mass execution of Jedi by clone troopers, the game tells the story of survivors struggling to conceal their identity as the Empire exerts its control and tightens its grip on the galaxy.

One force-sensitive survivor, Cal Kestis, has become a scrapper in the five years since and has managed to conceal his identity. Yet he cannot hide forever, and soon finds himself on the run from the Sith and racing to locate an object that contains the names of every known force-sensitive child.

As with any Star Wars story worth its salt, he’s joined by plenty of friends, including former Jedi Cere, the wise-cracking pilot Greez, and an adorable droid named BD-1 who assist Cal with puzzle-solving and acts as his greatest cheerleader.

It’s all familiar. These beats have been covered in previous Star Wars stories. Still, Fallen Order manages to offset its derivative elements with tremendous performances and gorgeous set-pieces. Cere’s actor Debra Wilson, who was just featured in Call of Duty: Modern Warfare, as well, gives it her all in a role that requires her to show both bravery and shame, and Cameron Monaghan is believable as the experienced-yet-untested Cal.

Cameron Monaghan is believable as the experienced-yet-untested Cal.

Any shot not filled with dialogue is usually complemented by a gorgeous score, which builds on the classic orchestral John Williams template with a touch of darkness and mystery.

The story eventually transitions seamlessly into the events of Rogue One, and the original movie, giving the game a place in the canon. It’s not a unique story that was missing from the timeline, but it does deserve to be included.

The mission of any game starring a Jedi is, of course, to emulate what makes the heroes so enjoyable in the films. Star Wars Jedi: Fallen Order certainly does that, but with an odd addition of DNA from another developer: From Software.

Yes, the “it’s like Dark Souls” trope is played out to the point of parody, but the elements included here make a comparison inescapable. The general flow of combat against a single enemy consists of parrying, dodging, and managing an enemy’s stamina gauge to break through and deliver a killing blow – think Sekiro more than From Software’s earlier work.

If you die, you’ll be brought back to a bonfire equivalent called a meditation point, and you’ll have to damage the enemy that killed you in order to get your lost experience back. Should you run out of healing items, you can rest at the meditation point to get them back, but that will cause enemies to respawn.

Star Wars Jedi: Fallen Order isn’t just a reskinned Souls-like, however, and it’s not nearly as tough. It still lets you feel like a powerful Jedi Knight with an arsenal of special abilities. From powerful lightsaber combo attacks to classic Force moves like the push and pull, you have the tools you need to take down several Stormtroopers at once, and you can reliably deflect their blaster bolts and even send them back to their shooters in order to cut a squad down to size.

By the time the credits rolled, the abilities at Cal’s disposal bordered on ridiculous. He can eventually change lightsaber configurations, knock back entire groups of enemies with a single Force attack, and throw his weapon in a circle around him to hit enemies in every direction.

Fallen Order falters only when imitating its inspirations in fights against lone powerful enemies, including bosses. You need to effectively parry to get a window to attack and break through your opponent’s guard, but the timing can feel off. In contrast to the smooth-yet-flashy approach of Sekiro, which relies even more on parrying, Star Wars Jedi: Fallen Order feels a little sloppy.

Star Wars Jedi: Fallen Order’s other influences are the Uncharted and Tomb Raider franchises. With the Uncharted-like Star Wars 1313 and a second action-adventure Star Wars game already canceled, Respawn had an opportunity to keep their essence alive, and it succeeds. Gorgeous environments are filled with caves to explore, walls to climb, vines to swing from, and secrets to unlock. You’ll spend as much time solving puzzles and traversing platforms as you will battling enemies.

Respawn’s expertise in level design is just as apparent here as it was in Titanfall 2. Wall runs lead into Jedi flips, which lead into Force-pulling a nearby vine so that you can swing onto a cliff. If an area seems inaccessible, it probably is – for now. You’ll likely return later after discovering a new move.

It consistently makes even the most-traversed planets feel fresh, and keeps Fallen Order’s pace every slowing below a dead sprint. New story-centric abilities even open up additional skills that you can unlock with your points, and the late-game abilities feel incredible to use.

In a big break from Electronic Arts’ usual strategy, Star Wars Jedi: Fallen Order has no microtransactions. After the fiasco surrounding loot boxes in Star Wars: Battlefront II, this decision seems imperative to preserving the confidence of longtime fans, and it further makes Fallen Order feels like an old-school game in the best ways. Want a new outfit or a different color for your BD-1 droid? How about a new lightsaber emitter? You’ll actually have to play the game and discover them before you can use them, no matter how much cash is on your Xbox or PlayStation account.

Does it do anything drastically different from previous games – not just Star Wars, but video games as a whole? No. Does that make Star Wars Jedi: Fallen Order any less thrilling? Not really!

Respawn Entertainment has shown a game is definitely more than the sum of its parts, and this sampling of classic Star Wars tropes and modern gameplay trends makes for a flashy and frantic adventure. Put it on your must-play list for the holidays.

Not if you are looking for a modern Jedi-focused game. For smoother melee combat, we recommend Sekiro: Shadows Die Twice.

You can blast through the main story in around 12 hours on the default difficulty, but that can be extended if you want to find all collectibles.

Yes. This is an excellent Star Wars romp that uses derivative ideas to build a tight, enjoyable campaign without the grinding or microtransactions that are all too common.