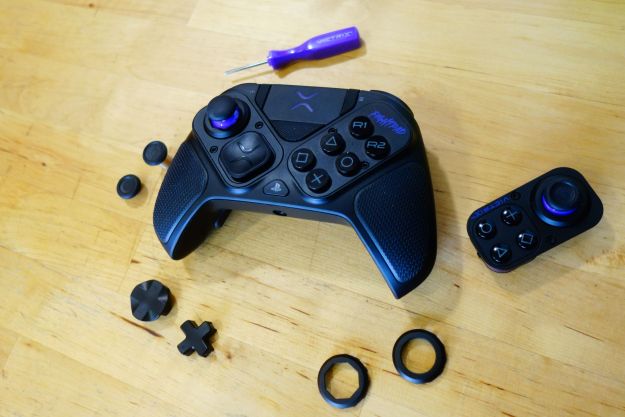 “The Victrix Pro BFG goes above and beyond to create a truly innovative third-party PS5 controller.”

-Third-party controllers always need to work twice as hard as regular gamepads. Hardware manufacturers need to find as many ways as possible to “sweeten the deal” for players, giving them a good reason to shell out for something not built by a console creator itself. Sometimes it’s simply a matter of a low price point to entice players who want a cheap replacement. Other times, though, that struggle leads to true innovation that makes it hard to go back to your regular old controller.

The Victrix Pro BFG is one of those moments.

Officially licensed by Sony, the third-party PlayStation 5 controller, which also works on PS4 and PC, takes hardware customization to a new level. While gamepads like the Xbox Series Elite 2 have long ruled on that front thanks to swappable parts, the Pro BFG goes even further with a wildly unique module setup that allows players to fully transform their controller in seconds. It’s a dream come true for tech tinkerers who want to take a screwdriver to their gaming peripherals in a safe and sanctioned way.

The Victrix Pro BFG is the best PS5 controller you can buy right now aside from Sony’s own DualSense. Its price might seem high at first glance, especially considering that you’re losing key features like haptic feedback, but you’re essentially buying three controllers in one — including a full fightpad. You simply won’t get what’s offered here from any other controller, and I hope manufacturers are taking notes.

At first glance, the Pro BFG is a standard wireless controller with a distinct visual flair. It sports a unique black-and-purple color palette and some geometrical touches that instantly make it stand out in a crowd. Mileage will always vary with designs like this, but I personally like the look and feel of it. Its grips are comfortable in my palms and textured menu buttons make it easy to navigate by touch. A touchpad and PlayStation Home button make sure that it has everything it needs to work with a PS5.

The Pro BFG comes loaded with features that aren’t available on a regular DualSense.

There are a few “pro” touches that beef up the base value. Its most clever trick allows players to turn their headset volume up or down by holding a button underneath the touchpad and pressing the D-pad up and down. Onboard audio control is one of my favorite features on third-party controllers like the Turtle Beach Recon, so I’m glad to see that catching on with more gamepads. It’s an area where I hope to see first-party makers catch up to.

There are some additional bells and whistles on the backside, which are nice touches that aren’t perfectly implemented. the controller features four mappable back buttons, which puts it a step above the DualSense. I’ve found that those buttons are just a touch low, and in my most natural resting position, I find myself accidentally clicking the bottom row. They could have been scooted up just a smidge, though comfort will vary there.

Similarly, the Pro BFG features a much-welcomed trigger locking mechanism that’s just a slight bit off in execution. Each trigger can either be used normally or locked to make for much shorter presses. I love having that option, though locking a trigger involves holding a trigger down, flipping a switch to the side, and then releasing the switch before the trigger. It’s just tricky enough to make me pause and think about it every time, which makes it difficult to switch on the fly in-game as I need to press the trigger down to pull it off. Luckily, switching from a full press to a quick one is much easier as flipping that same back button instantly locks it in place.

There’s even more to the package in the form of a button that stores sound presets and a switch that lets you toggle between PS4, PS5, and PC. While I have my nitpicks with certain features, that doesn’t change the fact that the Pro BFG comes loaded with features that aren’t available on a regular DualSense. Those components would be enough to make this a good third-party option. But that’s not even the exciting part.

The Pro BFG’s truly innovative selling point is its modular design. Like other high-end controllers, it brings a whole lot of customization. For instance, it comes with three different D-pad styles: a traditional four-direction cross, an eight-direction circle, and Victrix’s own unique design that’s almost a little between a D-pad and a stick. Each one is easy to pop off and replace in an instant with no hassle.

It’s an engineering marvel that’s easy to recommend for players who jump around a lot of different game genres.

On top of that, it comes with extra stick caps, allowing players to switch to a convex shape or a tall “sniper stick.” Unfortunately, only one of each is included, so you can’t make both of your sticks convex at once — this was disappointing as I found that to be my shape of choice when playing around. Two octagonal stick gates round out the package, letting players easily replace the standard round ones. All of the options give players plenty of tools to mix and match.

Here’s the kicker, though: The buttons themselves exist on rectangular modules that can be easily popped out of the controller with a tiny screwdriver tool. That ends up adding a level of utility and customization I’ve never seen in a controller before. For instance, the left joystick and D-pad live on one module. If you pop it out and flip it over, you instantly change the controller from a standard PlayStation layout to an Xbox one where both sticks are next to each other at the bottom of the pad. It’s also how you’re able to change those stick gates, popping the round ones off the module and locking in the octagonal ones in a snap.

That ingenious design culminates in its grandest feature, one that justifies its $180 price tag. The package comes with a six-button module that instantly transforms the standard PS5 layout into a fightpad. That means you’re getting two controllers in one — or four if you consider that you can flip both the base version and fightpad into Xbox style.

Tinkering is believing here, but here’s how that all comes together in a practical use case. I started one of my test sessions playing Call of Duty: Modern Warfare II. I locked my triggers for shorter presses, snapped on the diamond-shaped D-pad, and popped on a convex stick with a round gate. When I was done, I went into my PS Plus library and opened up Mortal Kombat 11. While it was loading, I screwed in the fightpad module, switched to an octagonal gate, unlocked the triggers, and slapped on a standard D-pad. I was able to do all that in an instant, before the game had even fully booted up. I was using an entirely different controller in less than a minute.

For those reasons, the Pro BFG is an engineering marvel that’s easy to recommend for players who jump around a lot of different game genres. The customization potential here is groundbreaking, creating a special controller with utility that is currently unmatched.

Those innovations are necessary because all third-party PS5 controllers have a very difficult controller to contend against. No controller other than Sony’s DualSense will give you its haptic feedback or adaptive triggers. That makes it a less ideal option when it comes to Sony’s big exclusives that are built around the PS5’s unique tech (Returnal, for instance, is amplified by those features). In fact, the Pro BFG doesn’t include any form of rumble period, which always feels a little awkward at this stage of controller functionality. It doesn’t have the DualSense’s built-in speaker either, which is less noticeable, but still a tradeoff.

The package also has some unexpected competition due to Sony’s upcoming DualSense Edge, which is its own version of the Elite Series 2. That gamepad will include some of the swappable components available here, but with all of the DualSense’s core features intact. It even includes swappable back buttons, which the BFG could have used (though the latter has four versus Sony’s two). If you’re not much of a fighting game player, you may be inclined to just wait it out so you don’t have to make any compromises for customization.

Even if the Edge ends up being a serious contender, the Pro BFG is still in a league of its own. It doesn’t just go the extra mile with its modules either; it’s actually $20 cheaper than Sony’s upcoming pro model. That’s impressive considering how much comes with the package. In addition to everything mentioned, it also includes a long mesh cable for wired play, a dongle to connect it wirelessly, a dedicated app to tweak settings, and a smartly designed carrying case that holds all of its parts perfectly.

Though some imperfections (some of which are beyond its control) hold it back from replacing my DualSense, the Pro BFG isn’t going to be just another third-party controller I immediately pack away after testing it. Its fightpad module ensures that I’ll have plenty of reasons to break it out as titles like Tekken 8 and Street Fighter 6 approach. Whenever I do, I know that I’ll have a durable, comfortable option that I can tweak to fit my needs.

Topics
The best PSVR games for 2023
PS5 themes: Can you customize your homescreen?
PS VR2 games: launch games and what’s coming later
Best PS5 game deals for January: Hours of AAA entertainment from $17
How to charge a Nintendo Switch controller
Best gaming laptop deals: Save on Alienware, Asus and more
Best Alienware Deals: Save on gaming laptops, PCs and monitors
The best video games of January 2023: Hi-Fi Rush, Dead Space, and more
With Valiant Hearts: Coming Home, Netflix finds its video game voice
The best guns in Dead Space
The Crew Motorfest brings a racing festival to Hawaii this year
The best skills to inherit in Fire Emblem Engage
Dead Space: how to fix the centrifuge